Mostly, they complain. Often, they’re writing to tell me they’ve given up. They stopped watching because the hour of news is confusing and they don’t feel they’re getting a definitive, authentic roundup of the important news of the day. A constant complaint is that, at the top of The National, two or three stories are presented as the news agenda. Then other stories appear in the lineup, getting brief or extensive coverage, unannounced.

Some long-time viewers are irritated by the use of on-screen text to promote an upcoming story in a certain number of minutes. The appearance of the text is too brief to read, let alone register. Others are irritated by what they see as overemphasis on Indigenous-related stories and content in the mini-documentaries that are featured. The latter complaint isn’t made in a rancorous, dismissive manner. It’s just that some readers who watch The National feel the coverage of wrongs done is relentless. They roll their eyes.

The amount of coverage of Indigenous topics is certainly large. But it’s simply part of the core list of main topics for CBC News. Go to the CBC News website that you are directed to from The National’s social-media activity and you’ll find the main list of topics amounts to eight – “Top Stores”, “Local”, “The National”, “Opinion” “World, “Canada”, “Politics” and “Indigenous.” It’s the roll call of topics, is all.

CBC’s The National is set to take on a new identity. Will its audience follow?

The National is on the air for hours every night. Capturing the tone, style and methodology is tricky. It’s not the same every night, no matter what some readers feel. But I watched one recent night with close attention, attempting to tease out what’s going on and what irritates viewers.

On April 2, the version I saw opened with Rosemary Barton and Andrew Chang announcing the three top stories. Stock markets were down because of fears of a looming trade war; Israel was changing its mind about sending migrants and refugees going to Canada; and a boy survived 12 hours in a sewer.

There was indeed a first-agenda item about the trade wars. Next, however, and seemingly out of the blue, came an item about what Barton kept referring to as “shoppers.” Now, I’m not dumb but – like a lot of people, I imagine – I thought the item was about Shoppers Drug Mart, commonly called “Shoppers” and having more than 1,200 stores in nine provinces and two territories. No, it was about a data hack at Saks Fifth Avenue stores. An expert somewhere peered into a laptop and told viewers about hacking. Then there was what you might call a sidebar story on a hacking outfit called JokerStash. Then a sort-of sidebar to the sidebar, with another expert peering into a laptop.

Next, to London and the alleged poisoning-by-Russians story. Footage from Moscow was shown, with some government guy saying people are lying about poisoning. Another expert was pronouncing and reached via Skype or FaceTime on a computer. Then a very brief item about Vladimir Putin possibly being invited to Washington.

Following that, Barton introduced that very confusing story on Israel’s policy on migrants and the resettlement of refugees. Derek Stoffel reported on the confusion, talked to a chap in Israel who says he wants to go to Canada. Then one man from Eritrea was interviewed in Toronto saying Israel “marginalized and maligned” the refugees and that Canada is a great, multicultural country.

Other upcoming items were then promoted: “Here’s what else we’re working on tonight.” An item about the death of Winnie Mandela, and brothers Daniel and Henrik Sedin retiring from the Vancouver Canucks. Then a plug for that night’s National documentary – one family affected by what’s called “The Sixties Scoop.”

Then, a story about clear backpacks issued to students returning to the Florida high school where the grotesque school shooting happened. Yet another person talking via Skype or FaceTime.

Next, the item about Mandela, an odd and confusing piece about “controversies overshadow her legacy,” “she became known as a ruthless ideologue” and it was said, “official tributes overlooked her scandals.” One was left with the impression The National took a dim view of how South Africa marked the death of Mandela.

There was another mention of the kid-in-the-sewer story, but first came the documentary Finding Cleo. Introduced by Barton, the context was given that the root of the issue of missing and murdered women might be found with families torn apart because of the residential-school system and the Sixties Scoop. In the piece, which was short but powerful, reporter Connie Walker helped a woman seeking information about her sister, Cleo. The story told to the woman was that Cleo had been adopted into a white family in the United States in the 1960s, attempted to return home but was assaulted and killed on her journey. There was TV footage from the time about Indigenous children available for adoption.

Cleo’s sister, also adopted, said she was made afraid of her own people and made ashamed. Throughout the item, the sister conflated the attitudes of half a century ago with attitudes now. This wasn’t questioned. The grave of Cleo was found. Her adoptive mother was found. “I don’t know if I feel very good about doing this,” Connie Walker said of knocking on the woman’s door. Cleo wasn’t murdered, it turned out. She took her own life. Police reports show Cleo was deeply unhappy about being separated from her family.

After that came an item about the opioid crisis and a man who died in jail from a drug overdose. It was as pessimistic as pessimism gets. That was followed by several brief items, about an SUV deliberately driven off the road in California, the youth known as the Affluenza Kid being released from jail and the hockey players retiring. At long last came “Moment of the Day” and the unfortunate kid in the sewer.

What the heck was that hour? It was maddeningly scattershot, very oddly paced and confusing. And, frankly, utterly exhausting to watch. The centerpiece documentary was well-meaning but one can see why The National’s emphasis on certain stories bewilders some viewers. Some would dismiss the well-meaning intention and say that the endless stoking of grievances is a kind of demagoguery. But The National is what it is. It has its list of priorities and is open about that.

What it doesn’t have is cohesion, nor does it offer the traditional attempt at defining the news tally of the day. If viewers are fleeing, that’s utterly understandable. 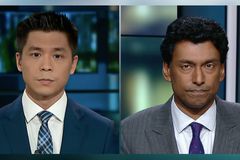 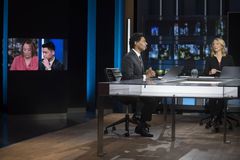 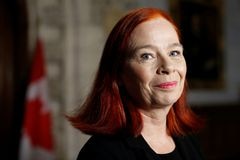