The appeal of fantasy material depends entirely on your tolerance for certain quirks in the storytelling. There are adults who, for instance, cannot abide talking animals. Even with the most open of minds, they cannot tolerate that leap on to the fantastical.

Such people should stay the heck clear of His Dark Materials (starts Monday, Crave/HBO, 9 p.m.), because it teems with animal companions to the main characters and these critters continually offer sage advice. But that’s not the half of it, in this lavish and highly ambitious series.

Based on Philip Pullman’s His Dark Materials trilogy of novels, which are hugely popular, apparently, the series strives hard to match the pseudo-lofty themes of Pullman’s books. Those themes touch on education as a bulwark against authoritarianism and touch on the idea that fate guides us, not our own aspirations and desires. On the evidence of the first batch of episodes, the adaptation is less than successful in conveying Pullman’s motives and arguments, but it sure is charming. It has a captivating, brave and smart young girl at its centre, for a start. Yet, here’s the thing – you’d be hard-pressed to figure out if it’s intended for adults at all.

The series has for some time been anticipated as the next Game of Thrones. That is, a fantasy series to grip a vast audience and take that audience into a spectacular world, and be awed by it. His Dark Materials is no such thing. It’s as far from GoT as you can get. It’s neither adult enough nor is it truly adolescent in its thematic heft. It’s a charming children’s story elevated to a level of poignancy some adults will find hard to resist, but others certainly will.

Set in a world that’s like ours but different, the story, in shape and form, is very British. It opens with this chap named Lord Asriel (James McAvoy) delivering a baby to Oxford University in the midst of a flood. He’s got a snow leopard at his side. Everyone in this world has a soul that is manifested in an animal companion. These are called daemons. And in this world, a totalitarian church called the Magisterium controls everything. (There is a real “magisterium” in the Catholic Church, which is tasked with interpretation of the word of God.) Freedom of thought is limited and anything that goes against Magisterium belief is heresy. Extrapolate your own meaning from this.

Anyway, Lord Asriel is combatting rigid thought and belief. This he does mainly by exploring the snowy, ice-covered north. In a way, Pullman is bringing the legends of British explorers such as Shackleton and John Franklin into the mashup. The baby he delivers to Oxford – the centre of the universe – will have some say in how this world will change. She is Lyra (Dafne Keen) who essentially carries the series. Lyra grows up an orphan at Jordan College, Oxford, but is destined for great things. This we know for sure because people keep saying it.

All of this unfolds with a rather earnest tone and pacing until about 40 minutes into the first episode. That’s when Ruth Wilson comes striding into it, almost licking her lips with relish. She’s playing Mrs. Coulter, who is a villain but a bewitching one. It’s a relief when she turns up because everything that has gone before was reaching a level of silliness that only a kid could find compelling.

Kids are central to the story, elaborate though the construction of the story might be. Kids are going missing, you see. Lyra’s pal Roger has suddenly disappeared. We also encounter a group of serf-like people called Gyptians, who live on canals, are nomads and have begun to notice that their kids sometimes flee or are abducted. There’s something vaguely patronizing about how the Gyptians are presented: Good-hearted working folk, but none too clever.

Before long – a few episodes in – we meet an armoured, talking polar bear called Iorek Byrnison, who has a drinking problem, and a Texan cowpoke-outlaw fella who goes around in a hot-air balloon and is played by Lin-Manuel Miranda, in a style that is just shy of camp.

Have you got the picture yet? Yes, it’s confusing if you’re not familiar with the books, but there is one crucial thing about His Dark Materials that is truly perplexing. It is unclear if the intended audience is children or adults. One can imagine kids and teens liking it a lot, in the same way that the Harry Potter books and movies had a special impact for them. Here, on HBO (it’s a BBC/HBO co-production), the production is just baffling. Charm can only take a fantasy series so far and for adults there might be the temptation to put childish things away. The animals keep talking, for a start. 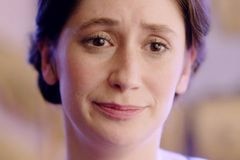 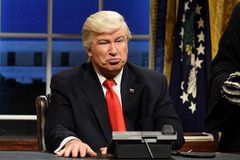 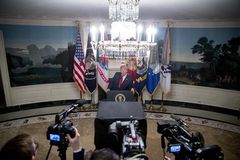