Escape my friends, escape. Withdraw in your mind from here; depart this domicile where you feel you have a walk-on role in a disaster movie you never wanted to witness, never mind play a role within it.

Here’s a list of escapes to other places you can find on Netflix. Some gloom, some sun, some drama and some serious sexy sizzle if that’s your need.

Hotel Beau Séjour is a remarkably textured, slow-burning and compelling murder mystery from Belgium. (It’s in Flemish with English subtitles.) There is nothing ordinary about it, but in the way Scandinavian dramas use the mundane to add substance to crime drama, this one is set emphatically in the midst of ordinary people living ordinary lives.

What happens to initiate the story is not ordinary. There’s a brutal, bloody murder scene. The victim is a teenage girl named Kato (played by Lynn Van Royen, who is fantastic). The key twist is that Kato wakes up in a hotel that has yet to be opened to the public and sees her own dead body. It’s in a bathtub, covered in blood. It takes a short while, but Kato realizes that she is, in fact, a ghost.

She’s a very typical teenager living a humdrum life. So she wanders away from the appalling scene of her own murder and tries to figure out what has happened. Soon, it dawns on her that only five people can actually see her and, eventually, realizes that they can see her because they are in some way connected to her murder.

There’s nothing of the supernatural about all of this. Kato is a simply a panicky, bewildered teenager trying to figure out what terrible events led to her own murder. She knows she got drunk and she went off with a boy, but how did it all lead to murder? We have a teenage girl obliged to look at the apparent tranquility of her community, and see what traps are laid for young women and how sexual violence simply exists everywhere. It’s just that she failed to realize, when alive, where danger lurks. There is a world-weariness in its approach and a strong sense of visual menace in the workaday reality. It’s an enthralling concoction, and then there’s the actual mystery to be solved.

Valeria, a new Netflix original from Spain (with English subtitles) is much lighter fair and utterly escapist, but clever fun. Main character Valeria (Diana Gomez) is a twentysomething wife, the winner of a short-story writing contest and is now attempting to write her first novel, which her publisher expects soon. Nothing is happening in her head except boredom and worries about money.

She relies heavily on her three close women friends for support. They seem to be leading much more interesting lives. Lola (Silma Lopez) is, for instance, having a passionate affair with a married man. She boasts about the intense sex and the viewer gets to see a lot of that. When Valeria meets a handsome stranger at a party, he doesn’t so much seduce her as give her the gist of the novel she must write, and an affair begins. The eight-part series has been unfairly dismissed as a Sex and the City knock-off. It’s nothing of the sort. The key to understanding this funny, romantic and gleefully sexy series is remembering that Valeria, the character, is in the business of writing fiction.

The Plagues of Breslau is a 90-minute, one-off crime drama from Poland (with English subtitles) and it’s bonkers. It’s a pulpy thrill-ride about detective Helena (Malgorzata Kozuchowska) chasing down a serial killer who has a particularly gross sense of drama. The first victim is an abattoir worker who was branded with the word “degenerate” before before being stuffed into cowhide and tossed into an outdoor market. Subtle, he is not. Neither is Helena, who projects aggression from her haircut to her endless stream of foul-mouthed sneering at other cops. When she’s not at work, mind you, she’s at home weeping quietly.

Everything about the storyline and the visual style of the movie is meant to make you blanch, and the engine driving it all is the director’s need to present a hyper-realistic portrait of Poland. That director, Patryk Vega, is also interested in speeding up the story, and the narrative here moves at a blistering pace. He makes most European crime dramas look painfully slow and oblique.

Opinion
Little Fires Everywhere: Incendiary angst in the suburbs
May 21, 2020 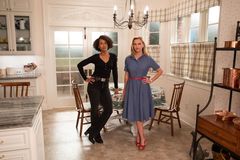 Opinion
Influence: The story of the most wicked man in the world
May 20, 2020