Somebody needs a cold cloth on the head and a nap. That’s us. There’s been a severe outbreak of giddiness in this neck of the woods. Don’t get me started.

Only if you’ve been in hiding for the past two days will you be ignorant of the giddiness. See, Season 30, Episode 21 of The Simpsons, coming this Sunday on Fox, is Canada-themed and the Prime Minister is a featured character. Oh. My. God.

That’s right, Season 30, Episode 21. Loads of people think the show was cancelled years ago, around the time Brian Mulroney was PM, but its plodding, turgid version of animated satire is still rolling out dolefully on Sunday nights. This week, it’s about Lisa being mistakenly granted asylum in Canada during a family outing to Niagara Falls. And Canadian shenanigans ensue.

Honest to heavens, to judge by the coverage and the glee, you’d think this was important stuff. Don’t get me started. It’s just more evidence that Canadians are suckers for any attention from the U.S. media or showbiz, no matter how juvenile and facile. Sad little puppies waiting to be petted, that’s us.

If this coming episode has material about Canadians being polite and saying “sorry,” I will scream. Loudly. The way the Prime Minister screams, I imagine, when he hears the words “Jody Wilson-Raybould.”

It is a sad fact, not a joke, that Canadians are portrayed as mindlessly polite by the U.S. entertainment racket. Even Canadians do it to us on American TV. When Sandra Oh was host of Saturday Night Live recently she trotted out the usual lame nonsense about politeness, saying we accept compliments by saying “sorry” and claiming that, as a Canadian, she can’t brag. The CBC duly reported this as “Sandra Oh shows her Canadian pride hosting Saturday Night Live.” Don’t get me started.

Most of the excited glee about the Prime Minister being featured on The Simpsons seems to be based on a theory he will be mocked and the SNC-Lavalin controversy satirized. Hello? Have any of you actually seen The Simpsons recently? It’s about as up-to-date as Doug Ford’s views on the environment. Besides, as the Toronto radio reporter who voices Justin Trudeau has revealed, the episode was made last September. Much of the theorizing is based on Tim Long, a Canadian-born consulting producer on The Simpsons, telling The Canadian Press the Trudeau character briefly talks to Lisa in the episode. Long said “there may be mention of a current scandal” the Prime Minister is involved with. On this vague hope, a ”may,” a nation rears up like a pampered, well-trained poodle and gets giddy. Don’t get me started.

From Trump to Zelensky in Ukraine: Why voters keep electing TV stars

After Game of Thrones, what is HBO’s next big thing?

One theory I’m nursing (along with a sore head, don’t ask) is that the giddiness erupts because we have such little satiric treatment of the news in Canada. For all the comedy that exists in this country – have you seen the way Jason Kenney looks at that pickup truck of his? Get a room. – the matter of the PM and the SNC-Lavalin affair has not been treated locally in the way SNL or The Daily Show would treat it, if it were a U.S. scandal: as an excuse for a laugh.

Thus, we get skittish about Season 30, Episode 21 of The Simpsons. Why we indulge in this strange communal madness of being flattered by the attention is beyond me.

We are not polite, actually, no matter how many times U.S. TV tells us we are. Ever been on the King Street streetcar in Toronto in rush hour? The grinding of angry teeth about other people being there, simply existing, would drown out your thoughts. The driver will shout with enough vitriol to give you the collywobbles if somebody blocks the door. Anyone ever seen a hockey game? Right. There you go. We like to see players injured, bloodied and given a damn good thrashing in fisticuffs.

Obviously, if it actually happens that this episode of The Simpsons features a glancing joke about SNC-Lavalin, or it gently chides Trudeau, pandemonium will break out. Oh. My. God. The Simpsons paid attention to us. The CBC will offer wall-to-wall coverage and certain chests will bulge with pride. (If it’s Jason Kenney’s, then avert your eyes.) There may even be tears of joy.

It’s pitiful. Don’t get me started. And this column will not end with “excuse my rant.” The hell with that. Now everybody take a nap.

Trudeau to be portrayed on Canadian-themed episode of The Simpsons
April 22, 2019 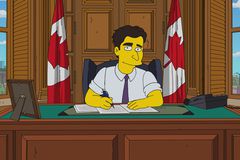 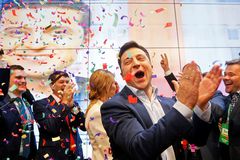 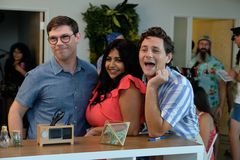