These days, television is a kind of huge megalopolis. There are interesting neighbourhoods and areas to visit, and others to avoid, depending on your mood or peculiarities. Here are five dramas from various areas to get you through all the moods of the dog days – the days of heat, drought, sudden thunderstorms and lethargy – that are upon us.

Dead Still (Acorn TV) is one of this column’s favourites of this year. A gloriously off-centre and addictive concoction, the six-part series is a deadpan Victorian mystery with a layer of subversive humour. An Ireland/Canada production, it’s set in Dublin in the 1880s and about Brock Blennerhasset (Michael Smiley), a “post-mortem photographer.” Yes, his gig is taking photos of the dead, but for the family and friends of the deceased, not for police purposes. This macabre aspect of the drama is accentuated and razzled with a tone of grim and ironic humour that is, at times, screamingly funny. Clever, visually sumptuous and indescribably unique.

P-Valley (Starz/Crave) is an eight-part drama written by the playwright Katori Hall and based on her acclaimed stage play. Set mainly in a strip club, The Pynk, in a small Mississippi Delta town, it’s one of the best-reviewed series of 2020 but not for every taste. At times frightening and at times inspirational, it’s about the torrid, complicated lives of the strippers and their aspirations. Intense, loud and firmly anchored in the locale, it relies a lot on the local vernacular and is best watched with closed-captioning if you want to fully embrace the raw vehemence of the dialogue. Much of the story is delivered in the context of a hectic, breathless torrent of sexist rap music, and the quiet moments are rare. And yet it has weight. According to one accurate review it addresses “domestic violence, misogyny, homophobia, colourism, classism, racism, and the intricacies of mother-daughter relationships.”

The Alienist (Netflix, one season) was made for the TNT channel and landed on Netflix here. Think Netflix’s Mindhunter, but set in 1890s New York. Cary Fukunaga, who gave the first season of True Detective its visual oomph, is in charge here, adapting the popular Caleb Carr novel and, no, it is certainly not about aliens from outer space. Emphatically set in the Gilded Age of the 1890s, it features prepresidential Theodore Roosevelt (Brian Geraghty), then a New York police commissioner, as he corrals an unusual team – a newspaper illustrator, a criminal psychologist and a police secretary – to hunt a murderer of young boys. The theories of early, 1890s psychology are at the heart of what is a simultaneously sumptuous and unnerving thriller series, moving along at a stately pace.

The Twelve (Netflix) is a new twist on the members-of-the-jury courtroom drama. The 10-parter is from Belgium (in Flemish with English subtitles) and weaves together the personal stories of 12 jurors with the complex story of the crime. That crime is a double-murder. Teacher Frie Palmers (Maaike Cafmeyer) is accused of killing her best friend years ago and, more recently, her own daughter. It’s a grimly convoluted but gripping tale, with a distinct emphasis on the manipulation of women by toxic male figures. Among the jurors there is Delphine (Maaike Neuville, wonderful as a self-destructive siren), who is so afraid of her husband she tries to hide her jury duty from him. That doesn’t end well. The overall tone is an unusual mix of the lurid and earnest social commentary.

Alias Grace (Netflix) is better savoured now, three years after its clangorous debut on CBC. It’s so tightly wound, stark and knowing about its central female protagonist, and at times elliptical in adapting the Margaret Atwood novel, that it needs slow, considered viewing. At times it soars when it reaches into the elusive soul of Grace Marks (Sarah Gadon) and at times the six-part series hits you like a slap in the face, it is so charged and sententious. Adapted by Sarah Polley and directed by Mary Harron, the series is, for those unfamiliar with the novel, a murder mystery of sorts set in Victorian Canada. When we first meet Grace Marks in 1859, she is a “celebrated murderess,” having been found guilty and imprisoned, at the age of 16, for the murder of her master and mistress. What happened isn’t easily understood by anyone, and that seems to fully include Grace.

With that I leave you for a few weeks. Enjoy what you watch, be good to each other, wear a mask, keep washing your hands and practise physical distancing.

Opinion
A timely feast of gentle comedy to comfort you
Subscriber content
July 31, 2020 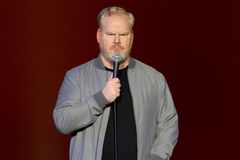 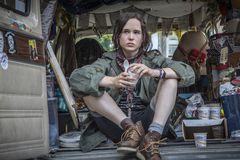 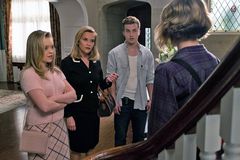