“There is nothing more powerful in the world than a good story.”

These are the words of Tyrion Lannister toward the end of Game of Thrones’ series finale. Meaning that they are the words of showrunners David Benioff and D.B. Weiss. Meaning that the pair’s 80-minute send-off to Westeros on Sunday night was not just an accidental explosion of indulgent self-defensiveness, but a conscious and true effort in expounding its own genius to an audience that has every right to now feel corrupted and betrayed.

For (most) of its previous seven seasons, Game of Thrones was a creation that appealed equally to the head and the gut. Its blend of ultra-detailed mythology, emotionally complex characters, classic themes, expensive set-pieces, frequent nudity, and buckets of gore swirled together to create the smart person’s trash, and the trashy person’s jewel. In 1996, novelist George R.R. Martin created a fantasy for those who supposedly hate fantasy, but in 2011, Benioff, Weiss and whoever cuts those massive cheques at HBO turned that creation into an uber-fantasy. Here was something so overwhelmingly compelling in its material and slick in its execution(s) that the announcement of its end has forced the culture to question whether or not culture itself will ever be so easily united under one single act of creativity.

Game of Thrones guide: What to watch now that it’s all over

And then GoT’s eighth season unfurled, and the first word I could ever muster every Sunday night was: ugh. As in, ugh, how did Benioff and Weiss (and, we can only assume, Martin) find and then magnify every flaw in what has otherwise been a fantastic production? As in, ugh, how are we to accept that characters who we knew to be layered suddenly turn into parodies of themselves?? As in, ugh, how did HBO hear Benioff and Weiss’s plan for the final stretch and not decide, hmm, maybe you guys need a half-dozen more episodes to actually accomplish that without it seeming stupidly rushed??? As in, ugh, can no one on GoT figure out how to properly light a damn battle scene????

At least Benioff and Weiss seem all-too-aware that these questions might be asked as audiences were exposed to this last stretch. After all, “The Iron Throne,” the sixth and final episode of the series’ eighth and final season, is consumed with responding to any and all of the potential criticisms of the material that came before it, especially last week’s horrendous “The Bells.” And their answer, by the way? Well, it is just as Tyrion puts it above: We’re great storytellers, so shut up.

I’m getting ahead of myself, though. Let’s start with talking about what went right in “The Iron Throne.” First, there was that fairly cool, if obvious, shot of Dany walking in front of Drogon’s wings. Then there was the interesting decision to abandon any score for the episode’s first 10 minutes, to underline the hollowed-out nothingness that has become King’s Landing. And then … okay, that’s all I’ve got, because right now, all I can think about was everything that went wrong. This might take a while.

Or not, because if Benioff and Weiss decided to abandon so much of their own thought and consideration into this season’s narrative, character, themes and aesthetics, then why should I devote any of my own to their supremely thin effort at defending their own creative powers in this, their final (and, as they would surely say, finest) hour? So, here’s more of a rapid-fire rant of all the many things that sank GoT’s finale:

I could go on, but it’s late and you likely have 17 other GoT-related tabs open on your browsers (because not only does “The Iron Throne” mark the end of HBO’s cash cow, it spells the end of such guaranteed traffic drivers as this very review; publishers around the world are drowning their sorrows in Dornish wine this very moment). And besides, what more could be said of an episode that name-checks its own storytelling brilliance? Well, perhaps on this note Tyrion puts it best again – and, again, highlights in bright yellow the smarmy satisfaction that has characterized so much of Benioff and Weiss’s work this season: “It’s a good compromise,” the once-and-future hand of the Seven Kingdoms says, “if no one is happy.”

Opinion
How Game of Thrones might end, according to television’s greatest – and worst – series finales 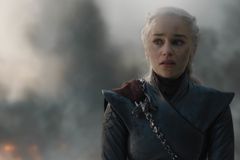