There has been inordinate coverage of Julia Roberts taking a role on the new Amazon Prime Video series Homecoming. It’s an understandable publicity ploy but the same darn things are being said over and over: Roberts is one of the last movie stars to make the shift to prestige TV. The fact that she’s doing it needs to be separated from the series itself and its merits.

Homecoming (streams on Amazon Prime Video on Nov. 2) is a paranoid thriller and, while Roberts has the leading role, it’s not all about her character. It’s an elliptical series – the episodes run 30 minutes each – about mistrust and, visually, it’s more disturbing than most things people indulged in watching during Halloween. In its foundation, it’s about the toxic legacy of military actions in Iraq and Afghanistan.

Anyone who watched the BBC series Bodyguard on Netflix recently saw that beneath the crowd-pleasing propulsive pace and twisted storyline was a core idea about a man left deeply damaged by his military posting. He loathed those who sent him there. He was “collateral damage” and he knew it. It’s what he and a terrorist attacker agreed upon.

Collateral damage is what’s never said, really, in Homecoming, but the series is anchored in the idea of former soldiers being ruthlessly exploited for a nefarious reason that is a long time emerging. Roberts plays Heidi, a counsellor at a startlingly antiseptic facility offering therapy and job-training skills to help returning soldiers re-enter society. It all seems legitimate, but the viewer knows from the start that there’s something sinister going on. Heidi’s boss, Colin (Bobby Cannavale), keeps calling her on the phone, from strange locations, with requests that she work on everything, from data to training the busboys at the facility’s cafeteria.

There’s an emphasis that all of this is unfolding in 2018, but the story shifts and, it is suggested, four years later Heidi is working as a waitress. A U.S. Department of Defense compliance officer, Thomas (Shea Whigham), turns up and wants to question Heidi about her work years earlier. She says she can’t remember. She goes home and complains to her mom (Sissy Spacek doing a great turn as a passive-aggressive warrior) about the guy bothering her at work.

Throughout, as the two storylines unfold, the narrative returns to Heidi’s counselling sessions with one ex-soldier. That’s Walter Cruz (Stephan James), who seems unnervingly well-adjusted. Or is he?

Homecoming is adapted from a podcast, and while its audio roots show, that’s a benefit – the conversations are very, very important. Directed by Sam Esmail (Mr. Robot) there is a visual flair to it that lets you know emphatically that this is the visual documentation of extreme weirdness. Designed to be unsettling, with the camera approaching from odd angles and sometimes circling characters and rooms like a voyeur, the style is meant to distract you from the dialogue and, like someone involved in an experiment, you’re obliged to shift focus constantly from images to words.

All that said, for all its noisy paranoia, it’s a thriller that quickly becomes focused, and a mystery is being solved. Roberts is good here. She looks dowdy, emanates irritation and spends a lot of time being tetchy. This isn’t a blatantly meaty role. It’s a role that’s about embodying a vague disgruntlement at all times. The role of Heidi has been described as rather like a Hitchcock heroine, and that’s true – there is a late-Hitchcock feel to Homecoming. It’s disturbing but gratifyingly so, and there is far more to it than Julia Roberts deigning to work in the television arena.

Also airing this weekend – Spying on Animals (Sunday, CBC, 8 p.m. on The Nature of Things) is two things. First, it’s a pop-science show about new camera technology revolutionizing the study of animals. Second, it’s your weekly critter-comfort show. Yep, drone cameras can hover over whales and provide insight never seen before. But the highlight is cameras recording the first-ever images of a baby giant armadillo in Brazil. Yep, even the scientists are gushing and enjoying a giant armadillo doing child care. You will, too. 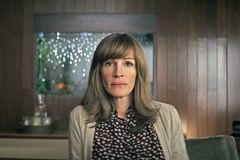