In season four of The Crown, Gillian Anderson leans into the role of Margaret Thatcher. Literally. She carries herself cantilevered forward, like a balcony over a precipice. Momentum in human form, she’s always pitched head first, whether she’s emerging from limousines or chopping eggs to feed her all-male cabinet. Her wigs are so mountainous, I feared they might snap her neck.

Anderson-as-Thatcher’s voice comes at us, too, rolling like waves onto a gravel beach. “Her voice was the best way into her character, for me,” Anderson, 52, told me in a phone interview this week. (Because she grew up in both the United States and the United Kingdom, Anderson’s own voice toggles between American and British accents. On this day it was British.) “Thatcher had elocution lessons when she was very young, to get rid of her northern accent. Then she had speaking lessons to bring her pitch down, so she didn’t sound like she was harassing people.”

Harassing people. These new Crown episodes drop Nov. 15 – just after the U.S. elected its first woman vice-president, Kamala Harris, in a North America with more woman politicians than ever before. Thatcher was the U.K.’s longest-running modern prime minister, from 1979 to 1990; she was both admired and decried for slashing social programs to boost the economy.

I looked back at past portrayals to see how she’s been viewed over time – how weighted the “woman” side of “woman politician” has been, and what’s been concluded about that.

What I found surprised me: The portrayals haven’t evolved. They are stubbornly consistent, much like the words detractors still use to describe the voices of powerful women (screech, shrill, hector, harangue). Writers and directors have prodded different aspects of Thatcher’s character over the years. They have flicked at where she fits into the progress of feminism, whether she was good or bad for women. But what they always ran into is that, like or loathe her, this woman was always her singular self.

“Thatcher feels separate from those kinds of discussions,” Anderson agrees. “Yes, hers was a different time. Politics was a man’s world. She behaved so much as if she was one of them. In 11 years, she brought only one woman into her cabinet. But somehow, she is anomalous. Somehow, the issues with women leaders are different today than they were with her.”

On Spitting Image, the British television hit that ran from 1984 to 1996 and used puppets to satirize political figures, Thatcher is cruel, ridiculous, yet unwavering. She most often appears in a Churchillian suit and tie, sporting a cigar. She’s voiced by a man, Steve Nallon. She is forever ordering raw steak, snatching the Queen’s crown, dissing her constituents (“How marvellous to talk down to you”), and berating weakness (“I want people to be able to stand on their own two feet – so give me that cane!”). When she asks a hairdresser to do her hair “in a style that will be universally popular,” he cuts her head off.

In Margaret Thatcher: The Long Walk to Finchley, a 2008 British telefilm starring Andrea Riseborough as Thatcher in the 1950s (Thatcher won her first election in 1959), she is a steamship of confidence and intention. She sleeps four hours a night, looks people in the eye as her grocer father taught her and budgets like her frugal mother. She instructs future husband Denis to propose to her, makes her own wedding dress, and exults when she delivers boy and girl twins, because it’s so efficient. Old white men say things such as, “If this harpy is adopted, it’ll frighten the horses.” She doesn’t care. At the end, when a Conservative politician declares, “If she gets into the House she shall never stop,” it’s both a promise and a threat.

In Margaret, a 2009 British telefilm about Thatcher’s final struggle to stay in power, Lindsay Duncan plays her as a gender-traitor with burning coals for eyes. She calls jokes “such hard work,” and rails against disloyalty. At the midpoint, she delivers a monologue about how her parents had wanted a son, and therefore “one was never really able to be a girl.” Her father took her everywhere; her years spent “listening to grown-up men” shaped her; she learned to “fight to be heard, against one’s smallness, one’s weakness.”

“But not like a girl,” she repeats. Still, any empathy is short-lived. In the final shot, Thatcher acknowledges to a male colleague that, during her ultimate address to the House, “I felt as though I was speaking for the last time ever, in my life.” The male colleague walks away.

In The Iron Lady (2012), starring Meryl Streep, writer Abi Morgan and director Phyllida Lloyd set the main action during Thatcher’s final, dementia-tinged years, and flash back to her days in power. This makes the film feel like a reproach: You insisted on savage economies and look where it got you – enfeebled, talking to your dead husband, cared for by your least favourite child.

Anderson’s Thatcher comes off better. She’s viewed, as all Crown characters are, through the prism of the Queen. But the whole season is very woman-centric, with Elizabeth (Olivia Colman), Thatcher and Diana (newcomer Emma Corrin) representing three different ways of dealing with power, fame and, especially, motherhood. “The fact that an episode about the Falklands War is told through the lens of motherhood is fascinating,” Anderson says. Peter Morgan’s scripts, she continues, “offer a more three-dimensional version of Thatcher, with more vulnerabilities. I was able to show a lot of colours.” Thatcher’s final moment here isn’t with a man. It’s with the Queen, and it’s about mutual recognition.

Watching all these Thatchers, I realized that the politician with whom to compare her is not Kamala Harris or Theresa May, Indira Gandhi or Elizabeth Warren. The politician most like her is Donald Trump. He’s the only other person who has pulled off Thatcher’s feat: to be reviled and beloved in excruciatingly equal measure. The relentless singularity of each transcends any portrayal. 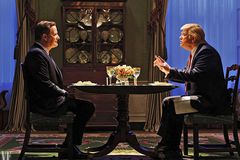 Fall TV preview: Get ready for a harum-scarum lineup of new series
September 25, 2019 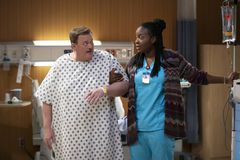