The other day in this space several new thrillers on Netflix were recommended. It seemed like a good idea. All persons everywhere have an opinion about shows and movies on Netflix. It is a unifier.

Another major thing that’s unifying is food. We all consume food daily, if we are lucky. And a thing about food is the way it makes people insane: the recipes, the quaint or secret rituals, the obsession with authenticity and personal history. Into this landscape steps the demure and diminutive figure of actor Stanley Tucci.

Stanley Tucci: Searching for Italy on CNN (two episodes are repeated on Saturday) just finished its six-episode run and by heavens many readers adored it. Worshipped it, you could say. And you have to ask why.

Is this already much-loved series culturally relevant, educational and passionate about food and wine? Or do Tucci’s beautifully filmed adventures amount, metaphorically, to the American baloney he mentions when enjoying mortadella in Bologna? Could Tucci be the new Anthony Bourdain? Let’s discuss.

First, the series has been a conspicuous COVID-era escape. Made during the pandemic, with mask-wearing common if limited in many scenes, it’s about travel and food, making it a near-pornographic fantasizing exercise from the vantage point of your overused couch and lockdown restrictions. On recent Sundays, when passing a home where the series was being watched, you could practically hear the salivating and sighing coming from inside.

Next, it’s been a very gentle experience. Tucci, a slight figure, has an actorly touch and great presence, but he’s very low-key in the show. He’s familiar with food, having published two cookbooks on Italian food, but he’s more familiar with, and deeply entrenched in, the techniques of acting; those pauses and hesitations that inform an actor’s firm grip on a character, without being manic or flamboyant. He’s been in some great movies and TV series, the type of productions that you admire, but forget he’s been in it at all. He’s a superb character actor.

All his skills have been on display as he visited several regions of Italy. He’s never a big presence; more the curious but polite visitor interested in probing gently behind the curtain, charming the locals with his restrained scrutiny and enthusiasm.

However, the upshot has been less than meets the eye. While eye-watering in visual oomph, Tucci’s series has touched so lightly on the economics of the food industry in Italy, and the actual work and physical labour involved. It romanticizes a very upmarket version of the Italian culinary experience. Every time Tucci says “oh my God” after tasting something, which he does a lot, you want more information than comes in a tourism brochure. Sometimes what Tucci offers, in his beautifully modulated voice, is simply bad, simplified history and worse social science.

That might seem unfair, given that Tucci’s series does have a serious, underlying theme. Multiple times he raised the issue of immigration in Italy, and the political and social ructions the issue has caused. At the same time, the series has leaned toward sentimentalizing local attitudes to migrants from Africa who have risked their lives to cross the sea to Italy. This was particularly evident in the concluding episode about Sicily, with that idealized heartwarming vignette of a couple who foster orphaned, migrant kids in their home.

In the matter of a Bourdain comparison, there isn’t one. Bourdain was ardent in his curiosity where Tucci is reserved. He was quizzical and sardonic where Tucci is guarded and careful about the slivers of social and political realty that intrude very politely into his journey.

Mind you, even suggesting mild skepticism about Stanley Tucci: Searching for Italy feels like an act done by a dissident heading straight for jail by popular demand. The pleasure taken by so many in watching the series – a second season will come, all going well, in 2022 – amounted to a more significant, sensuous relationship than many viewers have had in the past year. The series does not present Italy as its viewers will ever actually experience it, no matter their wealth or cravings. But it has satisfied so many at just the right time. Fine, we’re unified on that. 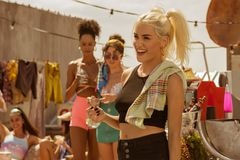 Opinion
Q: Into the Storm takes a deep, ominous dive into a conspiracy phenomenon that threatens democracy
Subscriber content
March 19, 2021 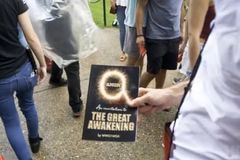 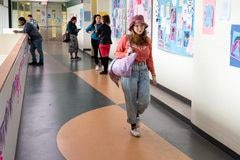