The first seven minutes of The Falcon and The Winter Soldier contain the following: rocket-powered drones; a chase sequence that zips and dips through the mountains of the Middle East; a mid-air fight sequence featuring guns, impenetrable shields, and the kicky mixed-martial arts skills of Canadian Georges St-Pierre; a battalion of nimble bad guys who glide from one helicopter to another like sky-leaping frogs; and enough winks and hints at the larger Marvel Cinematic Universe that you might need to rewatch the past three movies to understand it all.

It is more action – slicker and higher-budget – and more directly tied to the big-screen franchise than ABC’s Agents of S.H.I.E.L.D. and Netflix’s Daredevil television series were over their entire comparatively no-frills existences. Which is of course the point; The Falcon and The Winter Soldier is Marvel Studios’ latest bid to reassure its fan base that the best Avengers adventures are no longer restricted to the big screen – producers can provide all the necessary thrills and heroics and gotta-watch-’em-all moments of MCU continuity on Disney+, too.

From this point on, if you really want to be involved with the MCU – that is, if you want to keep your membership in the world’s most popular cultural club, 23 movies and counting – you’ll have to sit down and watch all six episodes of TFATWS, presuming you are already up to speed on Marvel’s first true foray into small-screen franchising, the just-wrapped nine-episode run of WandaVision. And this is all in preparation for the premiere of the six-episode Loki, coming to Disney+ June 11. And the animated What If? after that. And then Ms. Marvel. And Hawkeye. And Moon Knight. And ... you get it.

It is a large commitment to ask of audiences, but for those who have already poured billions of dollars into the MCU box office, TFATWS should be no obligation at all. Especially for the MCU acolytes who might be coming off WandaVision frustrated with that series’ attempt at lightly toying with the superhero formula. Although that series eventually landed on having one superpowered being (Elizabeth Olsen’s erstwhile Avenger Wanda Maximoff) fight another super-powered being (Kathryn Hahn’s witch Agatha Harkness), as usual, it was also preoccupied with meta-television gags and a sincere, if surface-y, examination of post-traumatic stress and mourning.

Judging by its first episode, TFATWS suffers no such ambitions – this is a meat-and-potatoes military adventure. Those who like the Captain America franchise will like it a lot. Everyone else has already stopped reading.

Set six months after the events of Avengers: Endgame, TFATWS opens with Cap’s partner Falcon, a.k.a. Sam Wilson (Anthony Mackie) adjusting to life without his best friend, and the spotlight Steve Rogers provided. Sam is still flying in and out of dangerous missions, such as that skirmish with St-Pierre’s recurring MCU villain Batroc detailed above, but the series also appears intent on expanding his domestic life, too. We get to meet his single-mother sister and are offered a glimpse into Sam’s simmering frustrations with the Pentagon and the downsides of Avengers fame (for instance: it’s not a steady-paycheque kind of gig).

Meanwhile, Sam’s frenemy Bucky Barnes (Sebastian Stan) is busying himself on the other side of the country, trying to make amends for the various misdeeds he took part in while brain-washed as the villainous Winter Soldier. (For some reason, this involves befriending an elderly neighbour who spouts sitcom-style one-liners.) Will Barnes find salvation? Will the two heroes unite to stop a mysterious organization that’s advocating for a return to a world before Thanos’s population-destroying “blip”? Will Sam’s two adorable nephews do something cute? In the MCU, these types of questions tend to answer themselves.

The series is promising enough, mainly because the premiere coasts on Mackie’s easy charm and a well-placed cameo. But I also have the suspicion that, like WandaVision, TFATWS might be a decent feature film unnecessarily ballooned by episodic obligations. Already, the first 45-minute episode feels dragged down by disposable side characters and B- and C-plots. Of course, I’ll still get up at the crack of dawn every Friday morning for the next five weeks to watch the series in its entirety. And Disney knows you will, too. We’re all heroes in our own way.

The Falcon and The Winter Soldier premieres March 19 on Disney+, with new episodes streaming subsequent Fridays

Film Review
Avengers directors’ new Apple TV+ thriller Cherry is a disaster not even Spider-Man could save
March 11, 2021 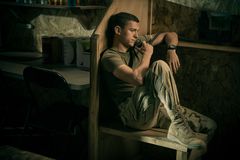 Opinion
Disney+ series WandaVision wants to save the Marvel Cinematic Universe through the power of ... sitcom gags?
January 15, 2021 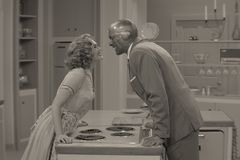 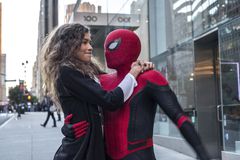