In a recent interview with National Public Radio in the United States, the actor Kathryn Hahn told an anecdote about her early acting career.

“In my last semester at Yale, I would take the train in to 30 Rock. [30 Rockefeller Plaza in New York, home of NBC Studios.] There was a Banana Republic at the base of 30 Rock. I would go into the Banana Republic. I would buy a suit, go up, audition for a pilot, go down, return the suit at Banana Republic, and promptly get on the train and never get the gigs.”

These days it’s a well-worn cliché to assert that this era of prestige TV on cable and streaming has been a godsend to female actors. The arena is full of anti-heroines and Hahn’s career has soared with roles on such series as Transparent and Happyish. Now she’s pretty much carrying an entire new HBO series.

She plays Eve Fletcher, who is divorced and has devoted most of the past decade to taking care of her son Brendan (Jackson White). She’s a great mom, supportive and caring without being smothering. She has measured out her days doing what matters for her son. She knows he’s no genius and senses that he’s a bit arrogant, coarse and probably ignorant of his own privilege. When Brendan goes away to college, she’s an empty-nester, alone and looking forward to allowing her intellect to expand. She’s got a good job as an administrator at a senior’s retirement home, but she wants to do something more rewarding for herself than simply taking care of others.

Meanwhile, in what is an unsubtle, but very funny and crisply ironic twist, Brendan is as lost as his mother. A popular jock in high school who found it easy to seduce young women, in college he’s completely out of his depth. He’s unaware of issues about consent and seduction. Most of the other students, even the jocks, are more socially and culturally sensitive than he is. In one priceless scene, he finally connects with the lacrosse players he imagines are just like him. They’re talking about climate change and what to do about it, actually. When Brendan mentions he saw a cool video of a guy surfing during a tsunami, they look at him as a clueless jerk.

As you might guess already, there are many clever juxtapositions going on in the series. (It’s seven 30-minute episodes and based on the novel by Tom Perrotta, although six episodes are adapted and directed by women.) Some are understated – Eve’s job at the senior’s home involves dealing with the lack of decorum about sex that mild dementia brings on. Other ironic correlations are more brash – in a writing class that Eve takes, the young man she finds attractive and sweet was the victim of her son’s bullying in high school.

Yet for all its satiric wallops, Mrs. Fletcher is deeply humane and for all the shock value in some scenes, it’s a thoughtful character study that’s gentle rather than acidic. The viewer comes to understand the insensitive blockhead that is Brendan as his life comes apart at the seams and his mom’s life becomes resolved. Throughout, you are completely captivated by Hahn’s courage and skill. The entirety of this sizzling, perplexing series is on her shoulders.

Living Colour, one of the strongest recent episodes of The Nature of Things arrives on CBC Gem. An enchanting and visually sumptuous examination of the science of colour – the light, the sky, how the brain interprets visual things – it looks at how humans and animals absorb, observe and use colour in different ways. The second season of the wonderfully wry The Kominsky Method (streaming on Netflix) arrives, too. Michael Douglas and Alan Arkin are back as the older guys in the entertainment business in Los Angeles, who talk, wisecrack and have odd adventures and misadventures in plotlines that have absolutely zero youth-appeal, something the series revels in presenting. 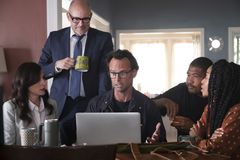 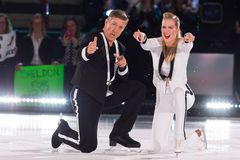 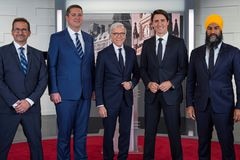