It’s a packed week ahead, with a lot of big-ticket drama to review. So lets try to get ahead. But first a short detour.

As constant readers are aware, this column has certain likes and dislikes. The cranky and suspicious can call them biases and prejudices, but no matter. This column is eternally optimistic.

In the matter of likes and dislikes, it is well known that my favourite of the Spice Girls was Posh. This will date me, I know. (Back in the day, when I made this revelation, I was in receipt of Posh merchandise from kind readers. They have been carefully stored.) So the news that Posh will be absent confirms of course that the upcoming Spice Girls reunion tour means nothing to me. Nothing.

Sometimes, this column doesn’t like or dislike, but has mixed feelings. In the TV arena, it is established that I am wary of the work of Chuck Lorre, whose now-vast resume includes, as creator/co-creator: Grace Under Fire, Dharma & Greg, Cybill, Two and a Half Men, Mom, Mike and Molly, and The Big Bang Theory. All those hit shows, conforming to network orthodoxies and only sometimes leaping beyond them. The famous Lorre Vanity Cards, which appear at the end of his episodes, have made Lorre seem more a person than a hit-making machine and now there’s Lorre’s non-network material.

Last year, Lorre’s sitcom Disjointed landed on Netflix. A strangely conventional comedy set in a medical-marijuana dispensary in a Los Angeles strip mall, it was cute but dull. The reason for its existence could not be nailed down.

The Kominsky Method (streams from Friday, Nov 16, on Netflix) is a very different kettle of comedy. It’s charming, droll, a little wry and a lot more heartfelt than anything Lorre has done. You can see why the freedom Netflix offers was, in this case, irresistible to him. It’s about older people and it deals with the consolations and tortures of getting older. And all this in the context of showbiz, L.A. and the desperation to succeed. There is no designated demographic for material of this type of comedy and that fact is also one of the underlying themes.

Mostly, though, it’s just gently funny. Michael Douglas and Alan Arkin are first-rate as the main male characters in what is far from the sitcoms we’ve come to expect from Lorre. The jokes about getting old are sardonic and there’s no slapstick on the subject, with the sardonic co-existing alongside mischievous, but wise, reflections on aging.

Douglas, age 74, plays Sandy Kominsky, an actor who hasn’t had much acting work in years, and now runs an acting class, while still hoping for TV or film work. (It’s a very different set-up from the acting class run by Henry Winkler’s vaguely insane Gene Cousineau on HBO’s Barry.) Arkin, age 84, is Sandy’s agent and longtime pal, a shrugging old-timer who is mainly concerned, in the first episode, with his cancer-stricken wife. They talk in old-school restaurants and diners, in hospital corridors and other places that clearly weren’t chosen for their youth appeal.

Sandy gets a bit impatient with his students and their rather superficial approach to acting. They’re thinking about being in commercials and sitcoms and landing some merchandising deal. One young man, Jude (Graham Rogers who was superb in Netflix’s Atypical) is concerned about prepping for a shampoo commercial and Sandy finally tells him to just wash his hair in advance.

Yes, The Kominsky Method is at times impatient with youth. This has brought advance derision from some reviewers who, one can only surmise, take themselves far too seriously. As do some of Sandy’s students, talking about identity. It’s a sign of the times we live in that jokes about the frivolous preoccupations of 20-somethings are considered cheap and nasty.

The series – there are eight episodes, it’s serialized and ideal for a binge-watch – is really about the two older men. Their conversations are sometimes testy, difficult and they can be grouches. But neither is powerful or rich. They’re just guys trying not to be selfish old men and hoping to adapt as the world around them changes yet again. Sandy begins a relationship with Lisa (Nancy Travis), an older student and divorcée, and their dating routine has some sitcom-style wisecracks but is defined by the dry amusement of the characters rather than their status as perceived fossils.

There is a lot here that will feel familiar. And a lot that feels unusually perceptive and astutely funny. It’s gentle and blessedly outside several orthodoxies. Appreciating it will date you, but never mind that. 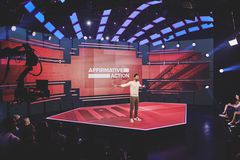 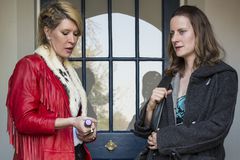 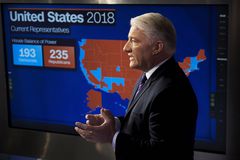