Weeks after work on the third season of The Good Doctor began, Shawn Williamson is in the midst of all the activity as a producer of the hit U.S. series shot in the Vancouver region.

With his hands in such memorable British Columbia-made films such as Seth Rogen’s The Interview, the 54-year old has become a fixture of a booming television and feature-film production sector in the province. The industry receives hundreds of millions of Hollywood dollars and employs thousands of workers in various capacities. But while many key series executives are Hollywood-based or commute from Los Angeles to B.C., Mr. Williamson lives in Vancouver, where he’s built a producing career over the past 18 years since founding his company Brightlight Pictures Inc. The company’s credits include projects featuring Anne Hathaway, Robert Redford and Michael Keaton.

However, he says he has largely left Brightlight to others on his team and is focused on The Good Doctor, which shoots for nine months of the year. “Producing a hit prime-time drama is an awesome opportunity,” Mr. Williamson said. “I was fortunate to be asked.”

The job involves dealing with issues around budgets, cast, scripts and other decisions involved in actually getting the show made at its studio base at Bridge Studios – a former factory for building bridge components – and on locations across the Vancouver region. Surrey’s imposing City Hall, for example, stands in for the exterior of a San Jose hospital central to the show about a California surgeon with autism and savant syndrome, played by Freddie Highmore.

“A lot of what I am doing is sitting in the middle [of production] and trying to make everybody happy,” Mr. Williamson said, in an interview, of his work on the hit series, known for touching the hearts of its many viewers.

He acts as an intermediary between the writers’ room in L.A. and the actors the director assigned to a particular episode and the crew.

“A perfect day for me is not being noticed by anybody, but having the show shoot amazing footage and not notice the producers," he said.

And a regular day rarely ends on the sound stage. “I am still working at home from the couch in the evenings,” Mr. Williamson said.

Few series take off like The Good Doctor, which has been a ratings leader during its two-season run. The heartfelt series, which first aired in 2017, is based on a South Korean show eyed for its adaptation potential by Daniel Dae Kim, a former star of Hawaii Five-0, and David Shore, the Canadian-born creator of the hit medical series, House.

Mr. Williamson said he cannot talk, in detail, about what’s coming for Mr. Highmore’s character, Dr. Shaun Murphy, in season three, which began production in June and has its debut in late September.

“There are a number of twists coming up in the season that, hopefully, the viewers like as [Dr. Murphy] matures and all of the doctors adjust to changes at the hospital,” he said.

In 2017, Mr. Williamson, acting for Sony Pictures Television, was working on a pilot for a show called Doomsday. “We were shooting lots of people and blowing up city streets,” Mr. Williamson wryly said of that kinetic project.

Doomsday did not get picked up as a series. “But the fortunate thing for me was that The Good Doctor did and I was engaged to do the series.” His standing deal with Sony meant he had a chance to be hired on at The Good Doctor – which is co-produced by the company – after the pilot for the show had been shot.

He says he was smitten by that pilot. “I loved the fact that it’s an underdog hero. We have somebody, Freddie, as an autistic doctor with savant syndrome, who is not someone you would ever expect to ever succeed as a surgeon,” he said.

However, the character does succeed, largely because he sees the world differently than others.

The show is attentive to effective production values, but focused on emotion. “If we don’t see as much of the surgery as we might, it’s somewhat irrelevant. It’s about the people and what you see in their eyes,” Mr. Williamson said.

He says the series is an outlier to B.C.'s production industry because it is a prime-time drama that stands apart from the more genre-oriented The X-Files, or CW series such as Arrow and The Flash that have been staples of the region.

“A 10 p.m. drama had typically not been shot up here until The Good Doctor,” Mr. Williamson said.

That, he said, is a lesson for the B.C. film industry. “We can do any genre here at the highest level.”

That said, Mr. Williamson says B.C. should never take the success of a show such as The Good Doctor, or anything else, for granted.

The show came to Vancouver for several reasons including tax breaks, a Canadian dollar that allows producers to stretch their budgets and the infrastructure and experienced crews available in B.C.

Mr. Highmore, a 27-year-old British-born actor who had his first movie role when he was seven years old and came to The Good Doctor after 50 episodes playing Norman Bates in the B.C.-shot series Bates Motel, was also a factor.

“He was comfortable in Vancouver. It was partially driven by his desire to be in Vancouver,” Mr. Williamson said.

Although he said the show appears secure in British Columbia, he noted that the industry remains highly mobile.

“Nothing is ever secure. These are decisions made well above my pay grade,” he said.

How Amazon’s The Man in the High Castle proves challenging for set decorators of the Vancouver-shot, Nazi-focused drama
May 7, 2019 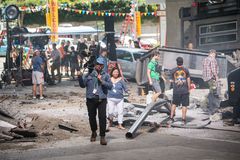