Listen, have you seen the new Ryan Murphy concoction on Netflix? Well I have, and it has driven me up the walls and back down again.

Ratched is the latest result of Murphy’s massive production deal with Netflix. Hardly my eyebrows were raised in 2018 when the streaming service signed a five-year, US$300-million deal with him. After all, he’s created, co-created or produced Popular, Nip/Tuck, Glee, The People v. O.J. Simpson: American Crime Story, The Assassination of Gianni Versace: American Crime Story, Pose and Feud: Bette and Joan, and that’s only a partial list.

Now, however, the knives are out, mainly because Ratched has garnered lukewarm or hostile reviews. Here’s the interesting thing: In a politically polarized country, Ratched is polarizing in a way that mirrors the politics. It is a misunderstood American masterpiece. Camp, gothic, gorgeously made and drenched in pop-art bright colours, it epitomizes much of what Murphy seeks to explore – the underbelly, the hidden history that exists beneath the accepted version of recent U.S. history.

The premise might seem harebrained to the uninitiated. It presents the speculative backstory of Nurse Ratched, the coldly abusive nurse played by Louise Fletcher in One Flew Over the Cuckoo’s Nest, the cogent 1975 film adaptation of Ken Kesey’s bestselling novel. Nurse Ratched rules a psychiatric hospital with an iron fist and forces a lobotomy on the iconic rebel McMurphy, played by Jack Nicholson in the film.

Ratched, created by Murphy and Evan Romansky, seeks to pin on Mildred Ratched (Sarah Paulson) – an archetypal demon, representative of establishment culture (outright authoritarianism, really) – a past that’s both poignant and disturbing. Mildred, you see, is a deeply repressed woman. She’s a lesbian but can’t admit it. She’s drawn to horrific acts of sadism but can’t understand why or stop herself. She’s as mentally unhinged as the patients she is employed to care for.

The series is set in 1947, and the Mildred we meet has survived abusive foster homes, become a no-nonsense war nurse and now is ruthlessly scheming to join the nursing staff of a psychiatric hospital, apparently to be close to a killer who brutally murdered several priests. The hospital’s head doctor, Richard Hanover (Jon Jon Briones), is a suave executive who is eager to have his theories about lobotomizing people – including his innovative ice-pick lobotomy – endorsed and supported by the California state government.

What has unnerved some reviewers is the series’ apparent inability to make it clear if Mildred is a victim or a villain. Is Mildred an evil tyrant or was she shaped by societal influences?

There is no clear answer. What you get in terms of Mildred Ratched’s life is not alternate history or counterfactual history. Mildred is fictional to begin with. What Murphy is doing, again, is creating a drama that illustrates a hidden history. In Murphy’s naive and flawed series Hollywood, he put both the hidden homophobia and explicit racism of Hollywood’s golden era front and centre. And then presented a jejune fictional triumph by the exploited over the status quo.

In Ratched, you are asked to witness how Mildred is required to bear monumental neuroses alone. The standard surface history of the United States requires that you believe in noble ethos of “the Greatest Generation,” who grew up in the Great Depression, fought the Second World War and built a stunning economy in the 1950s, going all the way to the moon in the 1960s. That’s a political slant. Beneath that surface, Murphy suggests, there is also the history of how LGBTQ people, non-whites and the mentally ill were treated. What must it have felt like to be Mildred Ratched? That’s a different political slant. (The ice-pick lobotomies aren’t fiction to horrify the viewer; thousands were performed.) Turning away from that aspect of history is cowardice.

In its lurid, operatic glory – the clothes, cars and settings are stunning – the series has a repressed sexual tension that’s fierce. Well, the heterosexual tension is often relieved, to be clear. And an array of awful people, made awful by stringently restrictive social conditions, do terrible things. It’s like a feverish nightmare with moments of bizarre dark humour.

Paulson is magnificent as the unknowable Mildred. Judy Davis is frightening in a banal way as Dr. Hanover’s sidekick, Nurse Bucket. There is also Cynthia Nixon, excellent as a gay press secretary, Gwendolyn Briggs, who tries to assure Mildred that she can live a good life as a lesbian, albeit secretly. Then there’s Sharon Stone, relishing her role as Lenore Osgood, a very rich and bitter woman who carries a monkey on her shoulder. And you wonder: Is that monkey existing only in her head?

For all its outsize horror and macabre approach, Ratched is anchored in a feminist and queer perspective on recent American history and popular culture. As such, it’s part of a necessary reckoning, and brave. It might be years before its greatness is recognized, after it has driven people up the walls and back. 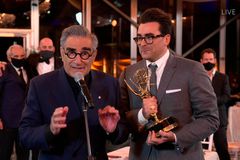 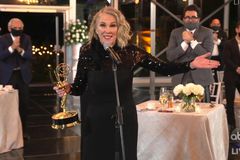 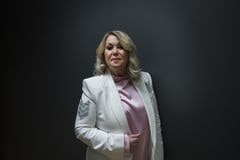