Diana Matheson is a cool customer. One glance from her, one look, one half-smile of skepticism and you understand why she’s been the locker-room leader of Canada’s women’s soccer team for years. She’s a no-nonsense, level-headed leader, and dryly funny.

She’s not playing at the FIFA Women’s World Cup in France. An injury ended that plan. Right now, she spends every day in the TSN studio doing analysis and commentary. But one morning this week I met up with her in a coffee shop in Toronto for a chat about this TV gig and the World Cup.

Is she enjoying the TV gig? There’s a cocked eyebrow. “Yes,” she says, and pauses. “Otherwise I’d be at home alone, crying in front of the TV.”

I tell her the all-female TSN panel is great, and it’s a pleasure to witness the knowledgeable commentary. This amounts to an unsubtle suggestion that she’s doing really well.

She gives me one of those looks telegraphing her doubt that I would know anything about such things. “Thanks,” she replies. “I’m just being myself. And my mom says I’m doing really well. That’s nice to hear.”

The entire enterprise by TSN is doing really well, actually.

Breathtaking Canada wins again, needs only a tweak of boldness to beat everyone

So what if the U.S. women’s soccer team is overpowering and obnoxious? It’s the American way

Canada plays its third and final first-round game at the Women’s World Cup on Thursday. It faces the Netherlands in a match that will determine which team tops Group E and thus which opposing teams will be faced in the next, knock-out round.

Yep, if you’re unaware, there’s a lot of women’s soccer on TV right now. Perhaps the championship run by the Raptors sucked up so much attention that the World Cup is still under the radar.

What truly deserves attention, apart from Canada’s excellent performance so far, is TSN’s all-female coverage. It’s astonishing to see. It shouldn’t be, but it is. If you’ve only experienced the traditional form of male-dominated TV coverage of major sports events, you might look at this twist and ask, “What madness is this?”

It’s brilliant madness, actually. Watching it, you are reminded how rare it is to see an all-women team on TV doing analysis and punditry with their knowledge, vigour and wit. Also, by the way, TSN is airing every single game at the tournament, not just Canada’s games.

It works so smoothly, this on-air gang. Host Kate Beirness is lively, funny, acerbic and concise. She also knows how to handle the panel. Alongside her is analyst Clare Rustad, who played for the Canada women’s national soccer team between 2000 and 2008, and is not new to TV punditry. Rustad is the nitpicker of the panel, often highly critical of performance and tactics.

Next to her is Kaylyn Kyle, who won a bronze medal with Canada at the London 2012 Olympic Games and is now retired from the national team. Kyle is the full-throttle enthusiast, with a ton to say, sometimes running out of time to get her thoughts out.

And then there is Matheson, who scored the bronze-winning goal at the London 2012 Games and also won bronze at the Rio 2016 Olympics. She’s played in midfield for Canada since 2003. Matheson is new to this TV punditry thing. She really is very, very good. She plays the reality-check role, offering concise, sometimes deadpan summaries of what’s happening. She can be a hoot.

On the ground in France is Laura Diakun. Doing commentary on live broadcasts of Canada’s games beside Luke Wileman, the sole guy on the team, is former national team defender Carmelina Moscato.

All of this is in stark contrast with TSN’s coverage of the men’s World Cup last year.

For the pregame, halftime and postmatch analysis, a small group of guys, most with British accents, sat at a desk and pontificated. That was the template for a panel of experts. What’s on the screen now looks revolutionary.

Already, the panel got some international attention, after Kyle and Rustad had harsh words for the U.S. team’s wildly exaggerated celebration during a 13-0 victory over Thailand.

It’s the excellence of the discourse that deserves major attention, mind you. This is a panel with great knowledge of the game, huge passion and very strong opinions. And they’re funny, sometimes self-deprecating and very shrewd. Over the years, TV soccer coverage has tended to favour former players as analysts and there has been tolerance of these guys – it’s always guys – boasting to the hosts and patronizing viewers. These women on TSN don’t do that.

I asked Matheson if she modelled herself on any broadcaster. “No. I’m just being myself. What I think is this: Don’t say on TV what you wouldn’t say to someone’s face.”

She adds that this TSN gig is not just about her media visibility. “For me, it’s just a nice thing to have in your back pocket,” she says matter-of-factly. “The visibility thing goes beyond me or having a former women’s player on TV. Kids will watch this on TV and see us. They see women, an all-women team on TV. That’s the real visibility here.”

It’s not yet 11 a.m. and Matheson has to get to work. Some days there is triple-header coverage and it’s a long day in the studio. As she gets up from the table, the injury that prevented her from playing at the World Cup becomes obvious. She’s been dealing with a foot injury for ages and she hasn’t played this season for her National Women’s Soccer League club, the Utah Royals. A foot is in a heavy cast and she uses a walking crutch that keeps the injured leg horizontal from the knee. It looks awkward to manoeuvre.

“It’s fine,” she says, as if making a fuss about it is wussy. “Rosie MacLennan, the gymnast, recommended this thing to me. She also loaned me her scooter. I’m fine.”

And off she goes to work, a cool customer on the field, in the locker room and on TV.

Opinion
A lasting impact of the Raptors victory: Culture, sports and politics converge on TV
June 17, 2019 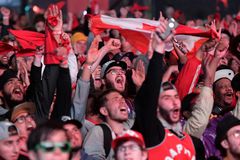 Opinion
Controversial Euphoria is as lurid as advertised, and a great trip
June 14, 2019 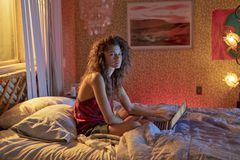 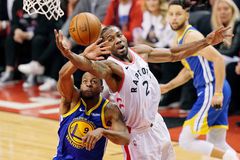