Ricky Gervais is a softie. This may surprise you, since his humour – in his stand-up gigs; his five turns hosting The Golden Globe Awards; and the television series he stars in, writes and directs, including The Office and Extras – can be excoriating.

But in his latest series, After Life, he’s truer to his real self. (Season 2 recently arrived on Netflix.) He plays Tony, a human-interest writer for his village newspaper, who’s lost in grief for his late wife, Lisa (Kerry Godliman). He tries to dull his pain with casual cruelty, insulting strangers, speaking heartlessly to friends. But it doesn’t work, because it’s not who he is. He keeps coming back to kindness – a fitting theme for these fervid COVID days.

“I’ve never had a response like it,” Gervais, 58, said in a 45-minute phone interview last week. “You realize everyone is grieving all the time.” His speech is quick, peppered with droll asides and he’s an empathic laugher – when I laugh, he laughs.

Other than suspending his live shows, Gervais’s current life isn’t that different from his typical one: He’s sheltering at home with his partner of 38 years, the novelist Jane Fallon. They take walks, play badminton, “split a bottle of wine and watch telly.” He reads, mostly non-fiction about science, and listens to “ethereal, melancholy, indie folk” music. And though he’s just beginning to ponder After Life season three, he knows he won’t give Tony an easy out, because that’s not real.

“I think real is more beautiful,” he says. “Foibles. Everything I’ve done, whatever it looks like it’s about, it’s about humanity.” Here are excerpts from our conversation.

Where does your life overlap with Tony’s?

I’ve grieved. I don’t think you get to this age without it. I’ve lost all the grandparents, both parents, an older brother last year. The worst thing would be losing Jane. Our relationship isn’t a Valentine card. It’s about goofing around. In the show, where Tony lifts Lisa on his legs? We’ve done that. Jane is finishing a book, so me being home more than usual is like her having a toddler. I keep hearing her go, “I’ll play with you in a minute, let me just finish this sentence.”

What moves you during this epidemic?

I like that people are doing Zoom quizzes with their families, being more creative. I’ve never liked cynicism. It’s too easy. It’s boring. I like sincerity and honesty, poetry and art, and nice, funny people. I think comedy is best when it says, “We’re all idiots, and that’s all right. Don’t worry about it.”

So where does your prickly persona come from?

Comedy should be a low-status affair. We’re court jesters; we’re down in the mud with the other peasants, making fun of the king. So when I’m hosting the Golden Globes, I know that people are sitting at home in their underpants, watching millionaires tell each other how brilliant they are. So I’ve got to be that guy. I’ve picked my targets well, planned every joke, made them bullet-proof.

Do you ever get clammy out there?

No. Because the targets I go after are corruption, pretension. If it was room full of wounded soldiers, people could say, “That’s nasty.” But it’s not. I always say, just because you’re offended, it doesn’t mean you’re right.

Will the pandemic change comedy?

I think people now realize that jokes aren’t the real danger to society. A joke about a bad thing is still better than the bad thing. I’m offended every day by real things: animal cruelty, religious intolerance, corruption, lies, rudeness, greed. But what I don’t get upset about is jokes.

In Humanity [his 2018 stand-up special], I do a bit about not being allowed to eat nuts on a plane. I say, “I’ve never wanted nuts more. So now, before I get on a flight, I rub myself down in nuts just in case.” I got complaints, “You should never joke about food allergies.” I replied, “I make jokes about AIDS, famine, cancer and the Holocaust.” I joke about the worst things in the world and everyone in the room laughs at 19 jokes. Then the 20th joke, about a thing that affects them, they don’t find funny. That’s human nature.

I find I can’t laugh at political jokes anymore.

Probably because you’ve heard them all and you’ve realized it does no good. For every person who tries to bring down a regime with a joke, there’s another person going, “We don’t care about your joke.” As I said, I get complaints about jokes, things I don’t really mean. Whereas politicians actually say and do terrible things, and they do mean them.

Why are you doing your most vulnerable work at this point in your life?

I want to go there as an artist. As I get older, I don’t want to be more famous, or richer, or win more awards. All I want to do is be more honest. Obviously I want to make people laugh. But I think the comedian’s job is to make them think as well. I’ve never been one for soft bits. I always want to take people through a scary forest, and out the other side into the sunshine. It’s role-playing for the soul.

Growing up in Berkshire, grief and depression were never talked about. I never saw a man cry. The working-class men I knew, they weren’t allowed to be depressed. They had a drink and went to bed. Luckily we can talk about things now, and that change is reflected in sitcoms. I’ve never shied away from taboo subjects. I think no harm can come from discussing them, in a comedic or dramatic way.

Will you do COVID jokes?

Oh yeah. When the time is right, of course I will.

Do you think the pandemic will change humanity?

I couldn’t possibly say. But there’s a great episode of The Simpsons, where Homer thinks he’s eaten a poisonous fish, then he’s told it’s a mistake. He goes, “From now on, I’m going to live my life to the fullest.” Then, over the credits, it’s Homer watching telly, eating a big bag of chips. It was so beautiful and real, I nearly cried.

What do we want from our celebrities at this moment? Lets start with sincerity
April 29, 2020 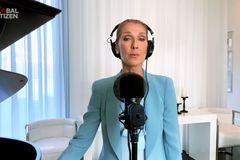 Netflix’s To All the Boys: P.S. I Still Love You gives viewers not what they want, but what they need
Subscriber content
February 13, 2020 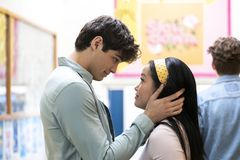 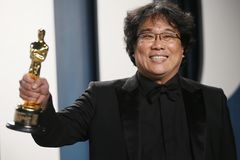