It’s intriguing that the sixth and final season of The Americans (Wednesday, FX, 10 p.m.) should arrive just as staff from Russian embassies and consulates around the world are being expelled. And it’s more than intriguing that this should all be the result of allegations of Russia’s involvement in the poisoning of Russian double agent Sergei Skripal and his daughter, Yulia, in England.

Spies and espionage. Double-dealing, betrayals and mysterious deaths. That arena never went out of style, never stopped being a matter of intrigue.

To say that The Americans has a new and added relevance would be an understatement.

The series has always been a masterful portrayal of deceit and moral complications. At first, it seemed merely odd that its premise presented viewers with the opportunity to root for Soviet spies in 1980s Washington. Then, as the series matured and deepened, it became an even more complex meditation on betrayals – in love, politics and friendships. It stayed thrilling, too, never losing sight of its core mission to keep viewers glued as its central figures came time and again within a heartbeat of being caught and punished.

Those figures are Philip Jennings (Matthew Rhys) and his wife, Elizabeth (Keri Russell), masquerading as a suburban couple who run a travel agency. At the end of last season, Philip had lost his will to fight, to continue spying, deceiving and killing. It’s not that he had succumbed entirely to capitalism and rejected his Soviet past. It’s just that he was exhausted and wanted a normal life. Elizabeth, always the more ardent Communist and more vicious, was appalled.

As this season opens – and on the evidence of the first three episodes it is wonderfully adult, subtle and wistful – Mikhail Gorbachev has come to power, and change in the Soviet Union is unfolding rapidly. In fact an arms summit between Gorbachev and the United States is being set up. The viewer knows what the characters don’t – the Gorbachev era will change everything and the Soviet Union will cease to exist.

The first episode opens using the Crowded House song Don’t Dream It’s Over as a soundtrack. Almost the entire song is heard and boy, does it resonate. “Don’t dream it’s over/Hey now, hey now/When the world comes in/They come, they come/To build a wall between us/We know they won’t win.” In another series, the use of the song might seem unsubtle, but here, it fits. As it moves toward its final episode, the show is about two people, two countries, two philosophies and what was called at one time the end of history.

It wasn’t the end, of course. Merely a pause, and Russian influence arose again, more prominent and more painfully obvious than ever. And in the era The Americans now encapsulates, Elizabeth is being played. There are people in the Kremlin wary of Gorbachev and what his ideas will beget. Essentially, they want his principle of openness shut down. It is up to Elizabeth to spy and to manipulate for that purpose.

Thing is, Elizabeth is as exhausted as the entire system she embodies. Literally, as a person, she is struggling, Chain-smoking, always lacking sleep, she is relying now on her teenage daughter, Paige (Canadian Holly Taylor, who is excellent), to be her assistant in everything underhanded, dangerous and tawdry that she undertakes. There is a powerful scene of Paige watching Soviet TV programs in order to grasp the cause she is fighting for. This kid, this wide-eyed passionate youth, is being dragged into something so meretricious.

Back to organize the espionage is the old spy-handler Claudia (wonderfully portrayed by Margo Martindale) who is even more emphatically a Soviet true-believer than Elizabeth. A scene in which Claudia informs Paige about Russian suffering and triumph in the Second World War has a blistering power. You could imagine Vladimir Putin applauding.

The Americans ends even more impressively than it began. It is one of the finest dramas of the past decade, poignant and at times breathtaking in its depiction of the viciousness of lies, deceit and raging violence done on behalf of a political cause. A much larger geopolitical situation is pithily and ferociously encapsulated in the situation of one family, sometimes in one suburban house, where people go to war with each other. The story will not end well, nor was it meant to. But the drama is exquisite.

The Americans presents a relevant world that could hardly be more urgent
March 5, 2017 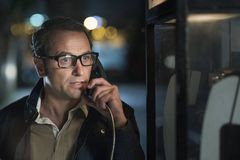