Disney+, the huge and much-anticipated streaming service, launched Tuesday in the U.S., Canada and, for some reason, the Netherlands.

It was a mess. A technical mess of malfunctioning log-in attempts and movies and series failing to load. For a lot of people, their introduction to Disney+ was looking for hours at a logo and an error icon. You would have more fun watching two flies mosey up and down the screen.

Disney released a statement: "The consumer demand for Disney+ has exceeded our high expectations. We are working to quickly resolve the current user issue. We appreciate your patience."

Patience? Are you mad? This is an era when consumers expect instant access with a click. The sound of frustrated moaning across North America may only have been drowned out by the sound of cackling coming from Netflix execs.

It was odd to witness a mistake by the massive Walt Disney Co. It spent billions accruing the content and amassing a library of new and old movies. The service has almost 500 movies and 7,500 episodes of television from the Disney, Pixar, Marvel, Star Wars and National Geographic libraries. If you wanted to stay home and watch what Disney likes to call “beloved stories,” you might not leave the house until next summer. After, that is, you get logged in.

Even odder is the fact that the marquee original series for Disney+, The Mandalorian, is a massive disappointment. The live-action spin-off from the Star Wars saga is hokey, hackneyed and about as sophisticated as a B-movie western from the 1930s. Nice visuals, for sure, if you’re still easily impressed by CGI effects.

The adventures of the Mandalorian (Pedro Pascal from Game of Thrones, though it could be anybody inside that tin can of an outfit) are set “after the fall of the Empire,” which means it takes place after whatever it is that happened in Return of the Jedi. This Mandalorian fella is a bounty hunter, going about the galaxy finding varmints, for a fee. He’s a Clint Eastwood type, saying little and fast with the firearms.

How hokey like an old-timey western is it? Well, it starts with a bar fight, just like ancient western movies began with a scene in a saloon, an argument and the introduction of the hero gunslinger. The Mandalorian fella finds the guy he’s looking for and announces, “I can bring you in warm or I can bring you in cold.” The varmint opts for warm, so there’s a trip across what looks like the frozen north to a flying gizmo that will transport both of them away. A monster arises from beneath the ice, by the way, but pay it no mind. Our anti-hero deals with it the way a gunslinger dealt with a pesky rattlesnake.

Stuff happens, most in what looks like a mash-up of a medieval village and a town in the Old West, as imagined by Hollywood in 1923. Anti-hero fella takes an assignment to capture a person or critter out in the badlands of the galaxy. He accepts the assignment from a dubious guy (played by Werner Herzog, no less) who has a passel of stormtroopers protecting him. Off goes our anti-hero on his mission to the badlands.

There he is set upon by a couple of angry Blurrgs, those critters that look like a big fish perambulating around on two fat feet. He is saved by a local old-timer, the sort of wizened figure of the Old West that would have been played by Walter Brennan in a horse opera set in a place called Cactus Creek, or such. Anyway, old-timer teaches Mandalorian to tame and ride a Blurrg and off they go, more or less yelling “yee-haw!” as they set off.

There follows a shootout at the varmints’ encampment, the introduction of a chatty robot and more gun action and attempted banter than we have seen since The High Chaparral was on TV 50 years ago. All that’s missing are the tumbleweeds.

There’s a twist at the end, when the Mandalorian discovers what he’s been paid to bring back to the dubious guy. There is an insertion of the cutes that would make your teeth ache.

If you’re a Star Wars fanatic, it might pass the time. But as the marquee show for Disney+, it is shockingly juvenile, loaded with fastest-gun-in-the-west clichés and very, very male. There’s a lot to consume on Disney+, but this particular item on the menu is like a very badly cooked spaghetti western.

From Netflix to Disney: How subscription streaming platforms shape up in Canada
November 13, 2019 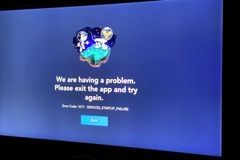 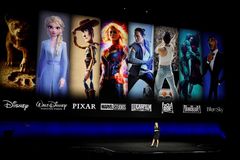