Some people of a certain age have known a guy like Roger Ailes. Possibly there are still men such as him in some workplaces: Bulky, shrewd, given to snarling, set in his ways politically and socially, and proud of his bluntness; he believes he has a way with women, but all he has is power, not charisma or charm.

The thing about the real Roger Ailes is that his workplace was the Fox News Network. He created it, shaped it, made it the mouthpiece of the Republican Party, turned it into a propaganda machine and ensured it defined U.S. political discourse. He also made it the most toxic of workplaces for women. When Ailes died, in 2017 at the age of 77, he had recently resigned from Fox News following sexual harassment accusations that he denied.

The Loudest Voice (starts Sunday, Crave, 10 p.m.) is a seven-part Showtime miniseries that stars Russell Crowe as Ailes. It opens with his death and Ailes in a voice-over declaring that he knows exactly what will be said about him. He doesn’t cackle, which is a relief, because the series is grim enough, a plain but acid account of a terrifying figure, a monster even.

On the evidence of the first batch of episodes, it doesn’t promise to reveal the soul of Ailes or find that tender part of him that was somehow turned malignant. Based on Gabriel Sherman’s 2014 book, The Loudest Voice in the Room, it simply offers the story of an ambitious white male born in the first half of the 20th century and how he took everything that designation implies, and used it to shape U.S. politics. The miniseries can be faulted for a lack of complexity and nuance, but it does have one ingenuous undertone – you watch this and project so much about Ailes onto the figure who occupies the White House.

After that brief death scene the story goes back to 1995. Ailes has just been let go from CNBC which he made into a powerful cable outlet. He’s seen boasting that he got great ratings by hiring (the real) Maria Bartiromo, whom he calls “the money honey.” There are vague accusations against Ailes and he must resign but he’s cunning enough to persuade the bosses that a noncompete clause does not include an outlet that doesn’t exist. He knows that Rupert Murdoch (played here by Simon McBurney) wants to launch an all-news channel and he’s the one to run it.

He does and the creation of the Fox News modus opera is at the core of the first two episodes. Ailes wants “fast-paced tabloid TV,” not seriousness. He wants a conservative outlet because all other media is considered liberal. He wants women in skirts and dresses on-air. He wants loud males. There is a fascinating sequence about the hiring of a then-obscure figure, Sean Hannity (Patch Darragh). Others see Hannity as an amateurish shock-jock from the boonies. Ailes sees someone who will drive liberal America insane. We also see and hear Ailes make his famous declarations that ”people don’t want to be informed, they want to feel informed” and that Fox News will have “the loyalty of the passionate few."

Intertwined with the story of Fox News being launched are glimpses of Ailes the private man. The first episode (directed by Canadian Kari Skogland) gives us this part of Ailes by offering a serious dose of the creeps. His relationship with Fox exec Laurie Luhn (Annabelle Wallis) is presented as a sick relationship. Ailes hovers by her in a bar, this dark, menacing figure, and we see glimpses of Ailes touching her in a hotel corridor. The real Laurie Luhn, by the way, recently launched a lawsuit against Fox News and before that, in January, another against the producers of this series. Fox News has denied her allegations and the miniseries producers have declined to comment on her suit against them.

As Ailes, Crowe is all stillness and quiet threat. His Ailes is a bland-looking figure who erupts into fury, calls meetings at 4 a.m. and at those meetings fires people and screams at others. He’s even cocky enough to shout at Murdoch and insult Murdoch’s sons. He does it because he can and he can because he’s created the most powerful and profitable all-news outlet.

What’s more implied than depicted with conspicuous brazenness is his relationships with women. These are deeply unsettling scenes. Every woman watching will recognize the manipulation, the tacit threats and murmured promises that are used to control and influence them. Sienna Miller plays Ailes’s wife Beth as a figure he barely recognizes as fully human. She’s someone else for him to control. The eventual appearance of Naomi Watts as Gretchen Carlson, whose accusations would be the undoing of Ailes, is presented as a routine episode in Ailes’s life; another woman for him to menace and harass.

Neither cartoonish nor entirely an in-depth character study, The Loudest Voice isn’t a screed either. It’s a stonily macabre story of ugliness, in a man’s character and in American politics.

Also airing this weekend – Ramy Youssef: Feelings (Saturday, 10 p.m., Crave/HBO) is the first stand-up special for Youssef, a very engaging, funny and shrewd comedian and actor. His role here is Millennial Muslim riffing on things such as his father, who emigrated from Egypt, working at one of Donald Trump’s hotels. There are few like Youssef on the radar because, as he points out, sometimes with savage wit, people of his background and age are largely ignored. 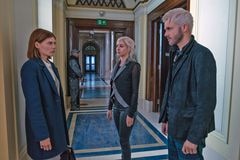 Opinion
HBO’s Years and Years: Unmissable dose of the frights about the near future
June 23, 2019 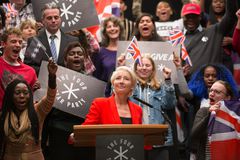 Opinion
The TV adaptation of Das Boot is a first-rate wartime thriller
June 21, 2019 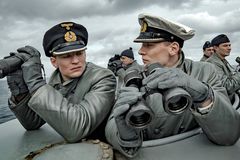