Knock-knock. Who’s there? Joe Biden. Joe Biden who? Will you just shut up man!

“Buckle up for a suspenseful night!” said Wolf Blitzer on CNN at 4:02 p.m. ET on Tuesday as the channel started its election night coverage. He had no idea then how true that was. Or maybe he did. Wolf Blitzer these days has the air of a man who has gazed upon Edvard Munch’s famous painting The Scream, and said, “I know that feeling.”

Now, we all do. More than 10 hours – repeat, 10 hours – after that “buckle up!” invitation, a CNN panel led by Jake Tapper was discussing Donald Trump’s assertion that the whole darn thing was “a fraud on the American people.” Blitzer was nowhere to be seen. One hoped he’d gone home to bed. Either that or he was curled up in a corner, so addled he was thinking up knock-knock jokes, like some of us were.

Opinion: The rise of Trump fact-checks exposes the media’s built-in vulnerability to misinformation

No clear winner, and expectations overturned. It was not the finest hour for American TV news. It went to overtime and then extra-extra overtime. And it amounted to the night of jabbering fools, once again undone by inaccurate polling and by the hubris that is part and parcel of TV punditry. None of these people actually understand the U.S. as it is right now. What it is, clearly, is mostly Trump-land. Donald Trump’s appeal and what he represents is underestimated, even by Fox News.

But on the evidence of Tuesday night, you might as well be talking to the walls. And, you know, talking to walls is the specialty of the all-news channels on election night. CNN has John King and his “magic wall.” Fox has Bill Hemmer and his little wall and MSNBC has the poor man’s John King in the excitable, always shirt-sleeved Steve Kornacki. For all their nerdy guy-stuff minutiae about voting patterns in obscure counties, none of them can actually explain what’s happening. After 10 hours, you wish a pox on all their houses and walls.

Things got off to the usual start. Fox News found it important to point out that there might be riots and showed many images of businesses being boarded up in anticipation of trouble. Then Fox had Democrat Pete Buttigieg on air to discuss this matter, and he deflated the whole thing by pointing out it was only Trump supporters who were expected to cause trouble. On CNN, the looming end of voting in Florida was presented as a can’t-miss moment, but John King made it all very boring by treating Florida voting patterns as something like a course he was giving on successful use of Excel documents. On Fox News, Brit Hume declared that, “Women have had a lot of trouble with Donald Trump.” Then he sat back as if expecting applause for this bold assertion.

The jabbering increased in intensity as Florida and then Georgia and more states became puzzles too strange for calm analysis. If you wanted calm, you could turn over to PBS. There, Judy Woodruff interviewed pundits who had very tasteful prints on the walls of their homes. This, you noticed, was in stark contrast to James Carville’s whereabouts on MSNBC, a location you’d guess is a motel room in Florida just before the party starts.

But there was no party for either side on this stupefying night. An air of desperate puzzlement fell over all the TV coverage. Something about the unexpectedly tight results meant that the anchors and pundits knew they were out of their depth. They were. As a result, watching the U.S. presidential election results unfold on TV was total Novocaine – no high, just numbness.

Oh, there were moments of genuine weirdness. After midnight, Fox News called Arizona in Joe Biden’s favour. Then there was much hand-wringing because, as somebody at Fox reported, Trump was furious. As a result, Arnon Mishkin, director of the Fox News Decision Desk, was hauled on air to explain himself. He stood by his decision but said, “I’m sorry” three times. This was theatre for an audience of one. And that one person was Trump.

At 12:45 a.m., Joe Biden made his brief speech in Delaware: “We feel good about where we are.” Time passed, there was interminable jabbering about the results from five states that could not yet be determined and then at 2:20 a.m., Trump spoke at the White House. He declared victory and said he’ll go to the Supreme Court: “This is an embarrassment to our country. We were getting ready to win this election. Frankly, we did win this election.”

Across the TV channels there was consternation. Even on Fox News, this was described as “extremely inflammatory” and “too far.” Hello, do you not know you are living and jabbering in Donald Trump’s America? A lot of people like inflammatory talk and going too far. They vote in favour of it.

Knock-knock. Who’s there? Joe Biden. Joe Biden who? Joe bidin' my time until the lawsuits stop and maybe the votes in Pennsylvania are counted. Maybe. 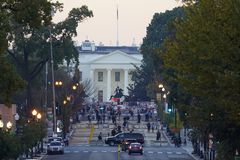 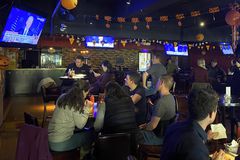 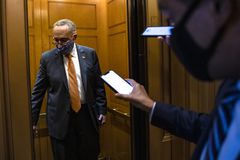