It is often hard to feel genuinely sorry for people who work in television. There is always a lot of nonsensical and insincere talk wafting about in that arena.

Yet there is a truly tragic undertow to season five, episode 13 of Kim’s Convenience (Tuesday, CBC 8 p.m. and CBC Gem). It is the series finale, but was meant to be a mere season finale and, frankly, it doesn’t work as a satisfying conclusion.

Oh yes, it’s funny, warm and has some fine scenes, but there’s a lot left dangling. Watching it even with familiar pleasure you still sense – you know – there was more to come. And you understand why some cast were caught off guard by the abrupt ending and remain resentful. Star Paul Sun-Hyung Lee, who plays store owner Appa, told The Canadian Press recently, “It really is like grieving a death: With time it gets better, and sometimes it forms like a scab.”

The abrupt end of Kim’s Convenience: Why did CBC let its beloved sitcom close up shop?

What happens in the episode, in synopsis, is this: Jung (Simu Liu) gives Appa and Umma (Jean Yoon) a business presentation for the store. He has ideas about modernizing and expanding the old convenience store. This gives his parents and sister, Janet (Andrea Bang), something to think about – whither the familiar Toronto variety store? Meanwhile, Shannon (Nicole Power) and Kimchee (Andrew Phung) are at the office teasing each other and that causes Kimchee to reveal something important about his family. At the same time, there is some unusual awkwardness between Shannon and Jung; some nagging, perplexing dispute.

When the first episode arrived in 2016, I called it a stellar debut and wrote, “It’s a killer comedy – a finely crafted sitcom with great charm. An absolute joy to watch.” It was true and remained true, this clever comedy that was simultaneously retro and startlingly fresh. While some seasons were a tad uneven, the show captured an international audience on Netflix and became the focus of attention for portraying an Asian family in an urban, Canadian setting.

But beyond that, the series avoided the pseudo-seriousness that could easily plague a comedy about immigrants and family dynamics. There was no earnestness and no mugging; there was little time for moral lessons in the breezy speed of it. It had good jokes packed into clever often screwball comedy with an eye on entertainment.

Exactly why the series came to an end early – another season was coming as far as the cast were concerned – and messily, is unclear. All that’s been mooted is that Ins Choi who wrote the original stage play and co-wrote almost every episode, didn’t want to continue. But there’s no statement from him, as far as I know.

What is clear is that CBC TV mishandled the situation. Coming at a time when Frankie Drake Mysteries was cancelled and Burden of Truth was also announced as ending, it looked like CBC TV presented a vista of next season that had a yawning void of content. Then, while the shock announcement of a premature ending for Kim’s was still reverberating, and bitter words were being shared on social media, CBC announced two new upcoming comedies. One is an actual spinoff from Kim’s with Nicole Power’s Shannon character in a new setting. The other is not a spinoff but has Andrew Phung in Run the Burbs, about “a young, bold Canadian family taking a different approach to living life to the fullest in the suburbs.”

Fine, new shows are needed and things evolve, but what’s on the cards for next year exists only as ideas, proposals and in-development. Plenty of pilots are made, even in Canada, that never see the light of day. Kim’s Convenience has been in existence for five seasons and, well, in television, generally you do absolutely anything to hang on to a hit, especially one that has generated such warmth and respect internationally.

And there is the perception problem – the single spinoff from Kim’s happens to feature the least developed character, and the one main character who isn’t Asian. You can be certain Nicole Power didn’t want that kind of perception aimed at her show. On the face of it, Andrew Phung deserves a shot at anchoring a comedy, but what he’s getting is not a spinoff from Kim’s. If there’s an actual thought-out strategy behind CBC’s manoeuvres, it isn’t evident.

All of this matters because CBC TV needs both goodwill and trust from viewers, and it needs to nourish, not abandon, a series that has critical esteem and is viewed with great fondness. People involved get hurt and turn cynical when some public situations are mishandled and that’s part of the tragedy that lurks under this bittersweet and inadequate ending to Kim’s Convenience.

The abrupt end of Kim’s Convenience: Why did CBC let its beloved sitcom close up shop?
April 27, 2021 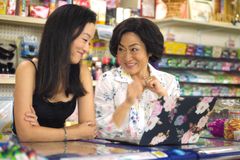 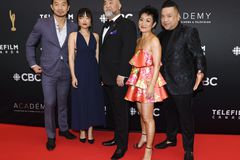 How the success of CBC’s Kim’s Convenience pushed its stars – and Asian representation – into the spotlight
January 11, 2021 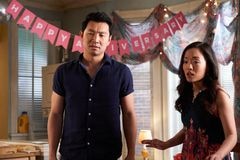