If your taste runs to grim, tense British crime drama with a dash of immediate social relevancy, I’ve got a doozy to recommend.

The Victim (streams on CBC Gem) is a four-part drama drenched in psychological trauma, courtroom suspense and the kind of domestic noir that is particular to the best British and Scandinavian productions. It is also a clever mystery with a core-shaking twist at the end, and it leans heavily into the issue of online vigilantism.

Framed as a criminal trial, it leaps back regularly to add meat to the bones of the story in the trial. Set in Edinburgh (written by Rob Williams, who has written episodes of Killing Eve and The Man in the High Castle) it is the trial of Anna (brilliantly portrayed by Kelly Macdonald), who is accused of inciting the attempted murder of a bus driver, one Craig Myers (James Harkness). He was viciously attacked on Halloween when, unknown to him, a social-media post had given his name, face and address as Eddie J. Turner, a man who years earlier had killed a nine-year-old boy named Liam Graham. Turner, being an adolescent at the time, was granted anonymity after serving a prison sentence. Anna is Liam Graham’s still-grieving mother.

Leaving the trial, the drama goes back to the attack on Myers and it doesn’t take long before it’s clear that Anna is the culprit, posting details about Myers online and convinced that when he was a teenager, Myers killed her son. But where did this woman, a nurse, get the information? Could it possibly be true? At the trial, the Crown takes the view it’s a case of mistaken identity and Myers is the entirely innocent victim of Anna’s obsession.

Leading the police handling of the case is Detective Inspector Steven Grover (John Hannah, familiar as Rebus in the TV adaptations of Ian Rankin’s novels), who has no patience with Anna’s vigilante actions. He listens to her rage – “He’s still evil,” she says. “I know he is. No one is safe until everyone knows where he is!” But he is unsympathetic. An innocent man was beaten to within an inch of his life because of Anna’s interference.

As the trial continues, various threads are drawn together. A lawyer suggests DI Grover has problems with strong women. His dealings with Anna seem vindictive. And there is the central mystery – if Myers is not the child-killer then who is he? Hints are given that the killer might be one of Myers’s friends, or it might be someone in Anna’s circle, someone who thought Myers would die and the real killer’s identity would then remain hidden.

The Victim offers many unsettling questions before it reaches a revelation in the last episode. Even then, it continues to poke at the viewer’s conscience and moral compass. The matter of victimhood is presented as mercurial. So many lives were shattered when a teenager killed a boy years before. In the present, Anna’s righteousness looks morally certain and only a police officer’s by-the-book intransigence is presented as any kind of counterweight. But as the storyline emerges fully, other victims emerge, too. Anna’s daughter Louise is a law student and while at first supportive of her mother, becomes terrified that her legal career will be destroyed. Myers has a wife and child and they, too, are victims of the attack on him. Moral conundrums abound.

The series – easily binge-watched in one or two gulps filled with gravitas and tension – has a very strong trio in the lead roles. Macdonald, best know here for Boardwalk Empire, brings a plainness to Anna’s grief and anger. You cannot feel unsympathetic. Hannah’s gnarled everyman quality is on full display as a cop weighed down by his personal mistakes and Harkness is utterly convincing as an ordinary, hard-working guy thrown into a maelstrom by a smear campaign. The viewer is the jury here, as we are obliged to see that nobody, no matter how much victimhood they carry, is perfect.

Country Music: Live at the Ryman (Sunday, PBS 8 p.m.) is actually a concert event that’s part of the promotion of the coming Country Music documentary series, Ken Burns’s epic, 16-hour history of the genre. The series is one of the major events of the new TV season and was eight years in the making. The concert features performances by Vince Gill, Dierks Bentley, Rosanne Cash, Rhiannon Giddens, Kathy Mattea, Marty Stuart, Dwight Yoakam and others. Some of them are in the Burns series, which explores a sprawling category of the American culture that was once handily but inaccurately summarized as, “Three chords and the truth.” 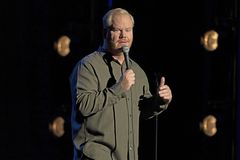 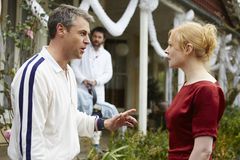