They don’t like us. They wish the Toronto Raptors didn’t exist.

The “they” we’re talking about here are the U.S. networks and the pundits who track the ratings. The sun had barely risen on Friday when the Hollywood Reporter carried an online story with this headline: “TV Ratings: NBA Finals Opens With 10-Year Low.” Run for your lives, obviously.

The story went on to report, gloomily, “The Toronto Raptors’ presence in the series will likely have a negative effect on ratings as Nielsen doesn’t measure viewership in Canada.” On and on it went, the gloom. The hand-wringing. The actual numbers, mind you, were not that bad. In 2018, the first game of the NBA Finals between the Golden State Warriors and the Cleveland Cavaliers had 17.35 million viewers in the United States. The preliminary, fast overnight numbers for Thursday’s opener featuring the Warriors and the Raptors had 14.2 million viewers.

That’s not a bad number at all and, frankly, ABC, which has the rights in the United States, had a very good Thursday. Anticipating that the NBA Finals would dominate, competitor NBC aired episodes of the already cancelled show Abby’s, Fox aired the already cancelled reality dating series Paradise Hotel. Only CBS showed some grit by airing a new episode of Elementary, which had one-third the audience that the Raptors/Warriors game drew.

ABC went all-out, putting Jimmy Kimmel Live in prime-time with a pregame episode that had star-power guests Jennifer Aniston and Adam Sandler. Kimmel’s monologue went heavy on mocking the Raptors and Drake. He blithely assumed the Warriors are certain to win the series: “A team of young Canadian upstarts versus the team that’s gonna win.” And, “The good news for the Raptors is that all-star forward Kevin Durant is out for the game with a calf injury, which means the Warriors will be forced to play with only three future Hall-of-Famers in their lineup. At this point, the Warriors are like the Avengers. We all know they’re going to win – we just have to spend three hours to find out how.” None of it was funny.

We don’t know how he felt later that night, after the Raptors won. Kimmel will be back with another prime-time show on Sunday (ABC, 7 p.m.) but it seems unlikely he’ll feel chastened. Such is the cockiness about the Warriors and such is the anti-Raptors feeling in the U.S. TV industry. Never mind, Trevor Noah has better Drake jokes than Kimmel in any case.

The air of general disappointment about the Raptors being in the Finals persists and is easy to find. In the Sports section of the online industry newsletter Programming Insider, the mood was apocalyptic. Readers were reminded that, “Major League Baseball playoff ratings in the U.S. took a tumble whenever the Toronto Blue Jays were involved.” Also that CBS was deeply disappointed with World Series ratings in 1992 and 1993 when the Blue Jays won. As the newsletter points out, with a woebegone air, the past eight NBA Finals featured LeBron James who is, obviously, the most famous athlete on the planet, if not the universe. The view from Los Angeles is always bizarre.

Of course, the success of the Raptors, the thing that disappoints U.S. TV insiders, is in fact a boost to local TV carriers of the Raptors in Canada. Coverage is shared by Sportsnet and TSN. Numbers for Thursday’s Game 1 gave the team its third Canadian TV audience record in two weeks. Sportsnet said the game attracted an average audience of 3.3 million viewers, a record for an NBA game in Canada. The network said viewership reached a staggering pinnacle of 7.4 million viewers as the Raptors won. By way of comparison, the seventh and deciding NHL first-round playoff game between the Toronto Maple Leafs and the Boston Bruins, on the CBC and Sportsnet National, had a combined viewership of about 3.7 million.

Most reporting from inside the U.S. TV industry tends toward exaggeration and dread. But the Raptors’ presence in the NBA Finals has taken on the vibe of real-world horror. It’s all “How could this possibly happen?" It’s all a bit demented. And, hereabouts, we can only laugh at the fear, dread and ignorance.

First Person: Why I’ve climbed onto the Raptors bandwagon

Crazy news from the crazy world of broadcast TV: Reboots out, masked singers in 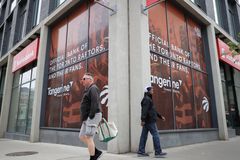 Opinion
For jaded Toronto sports fans, the Raptors are making them believe in miracles again Subscriber content
May 31, 2019 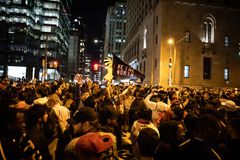 Police search for seven men who climbed on cruiser after Raptors game Subscriber content
May 29, 2019 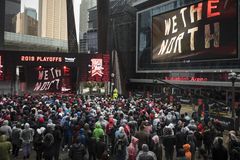