The things that people watch on Netflix. Honest to holy heaven, it would shock you.

Right now, if the buzz is to be believed, two things are fighting it out for top spot on the Netflix Canada charts. One is the revival of the true-crime series Unsolved Mysteries. The other is about roving gangs of armed and dangerous nuns.

Warrior Nun (Netflix, obviously) is the latter and it’s a hit. When I first saw the title I thought it referred to a spoof episode of Father Ted. But, no. According to Netflix, “Warrior Nun is like Buffy meets The Da Vinci Code with the angst of My So-Called Life thrown in for good measure.”

Fair enough and, alarmingly, it’s true. It’s a hoot and not in bad way. After sampling several episodes, I can see why hordes of people decided to give up on making sourdough bread, engaging in front-plank challenges or learning a new language. They have given themselves over with a resigned sigh to the giddying glory, the pity and terror, the frisky, frolicking supernatural shenanigans of an elite order of nuns you don’t wanna mess with. It’s wonderfully weird and I loved it.

The start is a tad confusing, but garish enough to make you curious. We are in Spain in the present day. There’s a stern nun snapping at a kindly priest, an apparently dead young woman stretched out like a mackerel, some ghouls barging around and a circular thingamajig is burned into the apparently dead young woman. After some time, up she gets and starts having fun.

Thus begins the real story: The newly alive Ava (Alba Baptista) is a 19-year-old orphan and former quadriplegic who was badly treated by the nuns back at the orphanage. It would be an understatement to say Ava has a new lease on life. She can walk, run and dance and has super-powers. That is, she’s incredibly strong, can walk through walls and can spot the arrival of demons when she sees red smoke-like stuff floating in the air. Mainly, however, she’s interested in having a good time. You know, going to a disco and getting wasted.

What is especially entertaining is Ava’s flippant, sassy and sometimes mordantly funny voice-over as things unfold. “Keep talking, pretty boy,” her inner voice says as a chap she meets explains his complicated way of making a criminal living. Ava spends most of the first episode in the team shirt and shorts of Malaga FC. (Don’t ask, just watch.) “I hope this team doesn’t suck, " she says to herself. Actually they’re not exactly thriving, Malaga, and currently mired in the lower league, the Segunda Division of Spanish soccer. But I digress.

As it happens, Ava is destined to toil in action for the Order of the Cruciform Sword, a secret society of fighter nuns who are chosen and trained to seek out and terminate demons from hell who roam the Earth. Or something. You could get yourself in a terrible twist trying to figure out the issues of faith, destiny, heaven, hell and where the Catholic Church drifts away from old-school Christianity. But don’t bother our head. Taking it all too seriously would destroy the fun. Besides, Ava herself is more than mistrustful of the Catholic Church, having had some experience with Catholic nuns who are more perverse than pious. Lapsed Catholics will adore this series. Trust me on that.

Warrior Nun is based on series of graphic novels by Ben Dunn. It was adapted for Netflix and produced by Canadian Simon Barry (Continuum, Bad Blood), who is a dab hand at making potentially esoteric and geeky paranormal/supernatural material into smart but rocking good tales of action, fun and frolics. There’s a great supporting cast around the Ava figure, a queer storyline and, well, if you don’t want shockingly good trash, go back to your sourdough bread and planks. 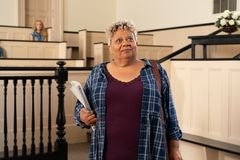 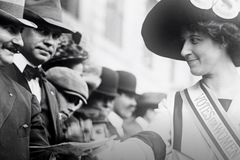 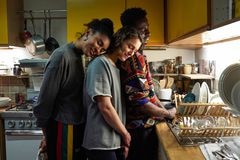