It’s an annual tradition, stretching back decades, that unites Canadians coast-to-coast: complaining about not being able to see the flashy ads that air on the American broadcast of the Super Bowl.

But for the past three years, we’ve had to find something else to grouse about, after the federal TV regulator, the Canadian Radio-television and Telecommunications Commission, handed down an unusual decree. That, because the ads are considered by some viewers to be integral elements of the Super Bowl broadcast, they had to be allowed to air in Canada, too.

Things got messy. Bell Media, which owns the CTV network on which the Super Bowl usually airs in Canada, sued the federal government, arguing the CRTC didn’t have the legal authority to make such a rule. The NFL then joined the suit and lobbied a bunch of American politicians to push their cause, while someone with friends in high places managed to get a special rule inserted into the new North American free-trade agreement (a.k.a. the United States-Mexico-Canada Agreement) overturning the CRTC. The matter then ended up at the Supreme Court of Canada, where a decision issued a few weeks ago means that, once again, Canadian ads will run in place of the American ones.

But the matter seems unlikely to go away for good. So, as next Sunday’s (U.S.) Super Bowl ads begin to roll out online this week, let’s catch up with how we got here, and what might happen next.

Last year’s Super Bowl, a low-scoring matchup between the Los Angeles Rams and New England Patriots, drew only about 98.5 million U.S. TV viewers, the smallest audience since 2008. (An average of 2.6 million viewers also streamed the game digitally, according to CBS, which aired the game.) Still, with entertainment choices continuing to grow exponentially, the annual broadcast is one of the few places marketers can reach a sizable audience, prompting them to snatch up all of the available inventory from Fox, which is broadcasting this year’s game. All told, Fox sold the equivalent of 80 30-second spots to marketers such as Budweiser, Doritos, Cheetos and Olay, for an estimated US$5-million to US$5.6-million each, or a total haul of US$400-million to US$448-million.

Until the CRTC’s directive took effect for the 2017 Super Bowl, about seven million Canadians watched the game broadcast on CTV and whichever U.S. channels were showing it each year. But over the past three years, Canadian viewership (which only measures those exposed to the Canadian ads) was in the range of 4.5 million. Still, that’s enough for CTV to charge an estimated $150,000 to $200,000 an ad, netting the network a total of about $11-million.

WHAT IS ‘SIMSUB’ AND WHY DOESN’T IT WANT ME TO WATCH THOSE COOL BUDWEISER ADS?

Much of Canadian commercial prime-time TV consists of U.S. programs bought by domestic networks (CTV, Global and City-TV) and airing at the same time on Canadian channels as they do on the U.S. ones. (Say, top-five show Young Sheldon, which airs Thursdays at 8 pm on both CTV and its U.S. network, CBS.) The Canadian networks which buy the domestic rights to those shows direct the cable, IPTV, and satellite services to simultaneously substitute (a.k.a. “simsub”) the Canadian signal, with its Canadian ads, for the original U.S. signal, and deliver that to Canadian homes.

The practice brings in an estimated $250-million annually to the Canadian TV industry, which enables Canadian broadcasters to use some of the profit from its U.S. shows to subsidize its (generally less popular) Canadian shows. But when Canadian viewers get upset, they complain to the CRTC – which upsets the CRTC. And so, in 2016, the CRTC passed a special directive that applied just to the Canadian broadcast of the Super Bowl, ordering cable and satellite companies to not practise simsub. CTV could continue to air Canadian ads on its own channel, but it could no longer substitute those ads on the U.S. broadcast.

“If [consumers] want to watch the signal that’s available in their area and see the U.S. ads, that’s their choice,” said Jean-Pierre Blais, the then-chair of the CRTC. “If they want to see the Canadian version with the Tim Hortons ad … they can look at that.”

HOW MANY CANADIANS DOES IT TAKE TO CAUSE AN INTERNATIONAL INCIDENT?

In handing down its directive, the CRTC pointed to a public consultation it had held in 2013, in which thousands of Canadians had voiced their opinion on a wide range of issues having to do with television, including simsub. “The Commission received 458 complaints regarding simultaneous substitution. Of these complaints, 20 per cent were related to commercials that were broadcast during the Super Bowl,” the CRTC said in its order. For those who are math-challenged, that works out to 92 complaints.

The many powerful forces in Bell’s corner included the NFL, which was concerned the value of the rights to its international games might plummet if non-U.S. broadcasters such as CTV were barred from selling ads. The NFL added its name to the Bell lawsuit. In December, 2016, U.S. senators Marco Rubio and Ron Johnson wrote a letter to David MacNaughton, the Canadian ambassador to the United States, arguing that the CRTC move “sends a troubling signal about the value Canada places on its largest trading partner, best customer and close friend.”

Canadian politicians got involved, too.

“There is no doubt that the economic consequences of this flawed decision are significant,” wrote Liberal MPs Wayne Easter and Bob Nault, according to a report by Bloomberg. “We are asking that the CRTC reverse its position immediately to ensure that our Canadian performers, producers, actors, and broadcasters are provided the same opportunity to showcase Canadian content in Canada.”

When the text of the new USMCA trade agreement was released in the fall of 2018, one subsection included language in which Canada agreed it would rescind “Broadcasting Regulatory Policy CRTC 2016-34 and Broadcasting Order CRTC 2016-335,” a.k.a. the Super Bowl simsub directive. However, the trade agreement didn’t pass immediately, and by then Bell Media had taken the CRTC to court, so the 2019 broadcast still carried U.S. ads.

WHY CAN’T CANADIAN ADVERTISERS CREATE REALLY COOL ADS THAT WILL MAKE US WANT TO WATCH THE CTV BROADCAST?

Put simply, Canada has about one 10th the population of the U.S., and marketers have (usually less than) one 10th the airtime and production budgets. Canadian companies simply can’t spend on ads like their U.S. counterparts. (That’s also why Canadian film producers have traditionally not spent the same kind of money on making or marketing their movies. Which is why we don’t generally watch Canadian movies. But any more talk like that and this article will end up in the Arts section.)

THE SUPREME COURT OF CANADA SAVES THE DAY (FOR CANADIAN ADS)

Last month, the Supreme Court of Canada ruled that the CRTC didn’t have the power, under the section of the Broadcasting Act which it had cited in its directive, to ban simsub for the Super Bowl broadcast. But, as a summary prepared by the Court’s communications department noted, “The majority didn’t decide whether the CRTC could make the decision under a different section of the Act, though.”

OKAY, SO I WON’T GET TO SEE ANY SLICK AMERICAN ADS DURING THE SUPER BOWL THIS SUNDAY. IS THERE ANY OTHER WAY TO SEE THEM?

Let me tell you about this thing called the internet.

Chiefs’ Patrick Mahomes leads way with his legs, not just his arm
January 26, 2020 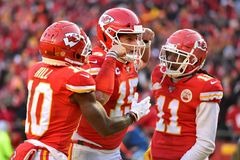 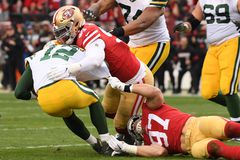 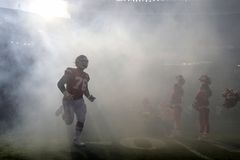