Murder, sex, rape, and, of course, lies – at first blush, HBO's miniseries Big Little Lies seems perfectly at home with the cable channel's prestige brand, which mixes the sheen of star-powered drama with adults-only shock. But David E. Kelley's adaptation of Liane Moriarty's novel is more than high-brow pulp. Thanks to its creative team and lead performances from Nicole Kidman, Reese Witherspoon, and Shailene Woodley, Big Little Lies is something cable audiences see all too rarely: a nuanced series that is concerned with character first, and titillation second.

Read more: Big Little Lies is less about the murder plot, more about the conundrum of motherhood

It's a rare sight even in this era of Peak TV, and most of the acclaim can be directed toward Quebecois director Jean-Marc Vallée (Wild, Dallas Buyers Club), who helmed all seven episodes with a gripping sense of flair and confidence. A few hours before Big Little Lies aired its series finale Sunday night – revealing just who among Monterey's privileged class ends up in a body bag – Vallée spoke with The Globe and Mail about trauma, twists, and the power of a great playlist. (Spoilers to follow.)

The ending hews very close to the one in Moriarty's novel, but it's also a bit different.

It respects the spirit, yeah, so it's [Zoe Kravitz's character] Bonnie who pushes [Alexander Skarsgård's] Perry, to all our surprise. But in the book it's mentioned that Bonnie was abused in her past by her dad, and we didn't go there. We didn't think it was the reason why she wanted to interfere and help these four other women who were getting attacked by this man. Whether she was abused in the past makes no difference – any normal human being would try to do something to help.

It's interesting that in the end, these five women who were all fighting with each other, in some way, then bond together to protect Bonnie.

It's the ultimate big little lie – it's that these five women are shutting up and not saying anything to the police, and saying Perry's death was an accident. That's touching, that's sad, and that's beautiful at the same time. You wonder, are they making the right move? But at the same time you say, yeah, because that's what he deserved. But you also see the detective is not letting go of the case in that last image of the series, where it's her point of view from a very far distance, watching these five women with their children on the beach.

Was that done with the intention that you and David could revisit this story down the line?

No, it's because we thought it would be an amazing way to finish it, to let the audience figure out and imagine on their own what might happen to these women. The detective might find something out, she might not. But these women have to live with this lie and they are okay with that. It's not meant to revisit it or to allow another season. It's the perfect ending. That's all, thank you, goodbye, no more Big Little Lies. Of course, I'd love to work with Reese and Nicole and these actresses again, but it should be something else. Although a nice title to follow-up would be Big Little Alternative Facts.

Reese would make a great Melania.

Were you ever worried that the murder-mystery element might overshadow the rest of the narrative?

Not at all. It's just a pretext, we didn't want to make a big deal of it. We shot the opening of episode one exactly like the end of episode seven. Well, not the very end, but two to three minutes before, we revisit the opening of the series with the exact same editing, except three or four shots I put in of [Nicole Kidman's] Celeste watching the scene. So we now know that she was the one who was watching at the very beginning, because we see this crime scene through her point of view. We then cut to the flashback two months before, and see these people in their lives and what it's like to raise children in this community. So the whole thing of the murder-mystery, of the whodunit and who's dead, was a device to get into these characters' lives. The whole thing was about love and relationships and lies and the impact of those lies. What it means to just live and have a family and be happy and to love.

The way you soundtrack those lives here is fascinating, too – there's no traditional score, just the characters encountering music through whatever songs the little girl Chloe is playing on her iPod.

Yeah, but if you look at everything I've done from C.R.A.Z.Y., with the exception of The Young Victoria, I've avoided using a score, and am always trying to put music in the centre of the characters' lives. When I read the scripts, I went to David and said, I want to make Reese's daughter here a music freak. It might be far-fetched to have a seven-year-old so cultivated and so wise about music, but at the same time, we're making fiction. Sometimes I cheated and used whatever music she was playing over other scenes, and it continues to play and becomes a score, and sometimes it was the opposite, where it starts as a score and then a few scenes later we realize that it's Chloe playing the track. For instance, that scene where Celeste comes out of her therapist's office and then there's this crazy, loud electric guitar that starts to scream and cry just like Celeste. And then it does the same thing for [Woodley's] Jane, and we follow these two characters in a parallel montage, and finally cutting to Chloe playing this Janis Joplin track, Ball and Chain.

So it's all to underline the emotions.

I don't know if underline is the right word, but it's nice how the music helps to feel what the characters are going through and to care for them. It defines them at the same time. Like when Alex's Perry uses Neil Young's Harvest Moon, one of the most beautiful songs ever, and for the first time of her life with him, Celeste sees hope. We learn to care a little bit about this monster. He seems to have some sincere intentions to change – but then he doesn't, and he always comes back to his demons.

How important was nailing the toxic dynamic between Perry and Celeste, and in examining domestic abuse? The way Alex plays Perry, he's not a simple one-note villain.

David didn't write it that way and I didn't want to do that, either. I told Alex, we have to care for you, man. You have to be a good father, you have to love your life, but you have this awful thing. And he goes to the therapist and tells the truth first, he initiated that. It was tough for Alex and Nicole to play those scenes – the violence, yes, but also the sex. It was blended with resentment and violence and not just normal sex, but an act that was about, "I'm hurting you and this makes my desire go stronger." It was difficult finding that, but I didn't have to interfere. They were brave and strong. There are not a lot of cuts in those sex scenes. The first is a one-cut deal. But then throughout the series, we revisit that violence through Celeste's perspective. She has these quick flashbacks, but we keep the sound in the present, so it's just the images. And it's glimpses. Not even 24 frames worth, maybe 20 frames or 18. The violence is more powerful because it leaves an imprint on your brain – you saw it, but you hardly saw it.

And then you have Celeste return to the story with four other very complicated women, each with their own layered narrative.

We have to give credit to David and Liane, and then for these five actresses. I was the lucky one to be chosen to direct and see them perform. You didn't want to focus on one or the other but at the same time, you have five strong women and they all have something to give and bring to the project, and are passionate about their work – and I'm the first audience. In the finale, the five of them are together in that last scene and it's one of the most amazing and beautiful things I've shot in my humble career so far.

Yet you were only originally hired to film the first two episodes.

Yeah, because I was already attached to the whole season, eight episodes, of [forthcoming HBO series Sharp Objects], which is what I'm doing right now. But then I started and I just did everything. And here I am today so tired and a living zombie.

When you're producing so many hours of story, do you think about this, and Sharp Objects, in a more episodic nature, or is this just another feature film to you, albeit spread out across seven or eight hours?

It's exactly like that, a long, long feature. The process is the same, and for Big Little Lies, we shot episodes one and two, then took a break. Then three, four, five, then a break. Then six and seven. It's a marathon, but it's great to explore characters in more than two hours. The tough part is the marathon aspect – you don't stop shooting. It's a lot of carrot cake, but if you give me carrot cake every day for 60 days, then I'll just say enough carrot cake. 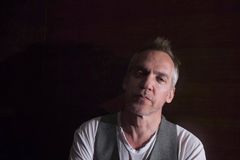 Big Little Lies is less about the murder plot, more about the conundrum of motherhood
March 30, 2017
Review
Ghost in the Shell review: Absurdly whitewashed and creatively sterile
March 30, 2017
Follow Barry Hertz on Twitter @hertzbarry
Report an error Editorial code of conduct
Due to technical reasons, we have temporarily removed commenting from our articles. We hope to have this fixed soon. Thank you for your patience. If you are looking to give feedback on our new site, please send it along to feedback@globeandmail.com. If you want to write a letter to the editor, please forward to letters@globeandmail.com.
Comments