The most astonishing, most discussed and popular quality-TV series of our time will end this weekend when Breaking Bad reaches its final episode (Sunday, AMC, 9 p.m. ET).

Breaking Bad has dominated the conversation about television for weeks and that conversation has mostly been about the plot twists, Oh-My-God moments and intricacies of taking the characters to an ending. Second guessing the events in the downward spiral of Walter White's life of crime, nitpicking at his wife Skyler's reactions. That's the gist of the discussion. It has all been internal – about the insides of the beast that is Breaking Bad, not the external whole of the series as it closes.

Let's step back and attempt an assessment of what it's about. As any student of the show will know, creator Vince Gilligan has summarized his mission with the series as "turning Mr. Chips into Scarface." It's a nifty synopsis for the creator, enabling him to bat away outsider analysis. It contains two handy pop-culture references. There is the solid integrity of the quiet schoolteacher Mr. Chips told in movies and TV versions of the story. And there is our recollection of Al Pacino as Tony Montana, the Cuban refugee who becomes a monster, consuming all around him, conquering the cocaine trade.

But Breaking Bad is more than a pop culture concoction cleverly linking two familiar, iconic figures from the movies. It's a savage attack on American capitalism.

It starts as an illumination of the contemporary American middle class. Walter White is a high school chemistry teacher in Albuquerque, N.M., sinking under the burden of his situation. On his 50th birthday he's doing a job his students despise, he has a son with cerebral palsy, a pregnant wife and then he's diagnosed with cancer. Worried about medical bills and leaving his family with great debt, he applies his chemistry skills to cooking meth for one big pay-off.

Sucked in, he wants more. And he wants more because his eyes are opened to how America really operates. A fast-food chicken chain is actually a distribution system for drugs. The cheap, addictive product sold for vast profit isn't chicken. Such is the Byzantine corruption that infests the seemingly benign capitalist enterprise of fast food that a German multinational company backs it, in full knowledge of the drug trade it disguises.

And why? Because greed is what fuels capitalism. When Walter grasps this, he embraces greed utterly. He discovers how easy it is to sacrifice everything – family, colleagues and friends – when driven by the greed to succeed, to be at the top. No amount of money is enough for him. There's always more to be made, another market to conquer, a competitor to crush. You could say Walter begins by making a career shift when faced with a crisis, duly becomes a careerist and then, over time, becomes a corporation. Breaking Bad is a parable about entrepreneurship, the very basis of American capitalism. Entrepreneur eventually becomes corporation, which is what the entrepreneur wants, and with that, loses all humanity.

It was also said The Sopranos was a story about American capitalism, and it was to some extent – a lament for the old days when lawless, frontier-style capitalist enterprise was the Mob's domain. Then the Mob was reduced to small-scale crime and ugly brutality and, like American industrial greatness, it was utterly diminished. Tony was the last of his kind. But Tony was a criminal to begin with. Walter White isn't a relic, the last of his kind. As a schoolteacher, he was a relic but his journey on Breaking Bad is that of a new man, a man who sees how the system works and loves it. Will this parable end in a lesson about the utter destructiveness of the raw capitalism that Walter has embraced and enjoyed? We'll find out on Sunday just how bleak it is.

There are other themes, too, of course. It's possible to read the destruction of Jesse's soul as the collapse of a millennial's naiveté when faced with the reality of the brutal working world where money is actually made. He wasn't made for this.

But the core theme is Walter White and money. Only money matters in this tale about what contemporary American capitalism is and what kind of America it has unleashed.

The Michael J. Fox Show (NBC, Thursday 9 p.m. ET) has a sweetly comic pilot. Fox is basically playing himself. That is, a famous guy with Parkinson's who goes back to work. What could be syrupy is just funny and yes, that is Betsy Brandt, famous as Marie Schrader on Breaking Bad, playing the Fox character's wife. 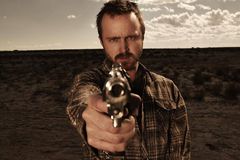 Is it over yet? Eight highs and lows from the Emmy awards
September 23, 2013 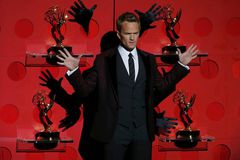