Moira Walley-Beckett wrote what's widely considered the best single hour of television ever, the 14th episode of Season 5 of Breaking Bad, titled "Ozymandias," after the Shelley poem about ruined greatness. In it, Hank was killed, Walt betrayed Jesse and pretty much every major character collapsed to his or her knees. She won an Emmy for it, as did Anna Gunn and Bryan Cranston. Now Walley-Beckett has a new subject: Anne of Green Gables.

That's not as big a disconnect as you might think. "Ozymandias" was bleak and bitter, thrilling and sad; it was breakneck and elegiac and painful to watch. But it was all that because Walley-Beckett knows the one thing that matters: Character is plot. So while the new limited series Anne is nowhere near as black as Breaking Bad, it's certainly the darkest, truest rendering to date of what being a redheaded orphan in 1890s Prince Edward Island would have been like. (It premieres Sunday evening on CBC-TV, where it will have an eight-hour, seven-week run before dropping in 190 countries on Netflix.)

"I wanted to tell the story in a different way, in a way important to a new generation," Walley-Beckett says in an interview on Anne's Toronto set – in the worn but tidy Cuthbert parlour – a few weeks ago, the day after Season 1 wrapped. "I read between the lines, to mine what isn't there but has been there all along. Themes of identity, gender boundary issues, bullying, prejudice, being an outsider, being unaccepted, what it takes to belong. Through the eyes of this accidental feminist, who has no boundaries for herself."

Speaking of accidental: Born in Vancouver, Walley-Beckett attended the Banff School of the Arts, where she trained as a dancer/singer/actress. A bombshell blonde, she popped up throughout the nineties and early aughts in episodes of, among many other shows, Danger Bay, 21 Jump Street, The Beachcombers and Diagnosis Murder. She also acted in theatre and wrote plays.

In 2007, she started writing for Raines, an NBC series starring Jeff Goldblum. Although the show was short-lived, her boss was fellow Canadian Graham Yost (Justified). He nurtured her playwright's sensibilities, which translated well onto cable TV.

"In plays, you don't have close-ups and master shots," Walley-Beckett says.

"People stand in a box and have conversations. So a depth of human interaction must occur, with nuanced, detailed dialogue. You become a strong character writer, which transposes nicely onto the small proscenium of television."

She was working on the lawyer show Eli Stone when the 2008 writers' strike shut down the TV business. During her weeks off, she discovered Breaking Bad (then brand-new), fell hard for it and wrote a spec script. It found its way to show-runner Vince Gilligan, who called her in for a meeting.

"We sit down," Walley-Beckett recalls, "and I'll never forget what he said." Here she lapses into a sweet southern accent: "'I don't know how you did that. I don't know how you know the characters so well. But my intention is to offer you a job.'" Beat. "'I just don't know if I have a job to offer.'" Two months later, he did, and over the course of 39 episodes, he taught her to think visually about character, too.

"Yes, I have a dark sensibility," Walley-Beckett says now. "But mainly I'm fascinated by the human condition. The reason people were so bewitched with Breaking Bad is that Walter White was an everyman. Through him, we explored delicate human relationships. I feel that way about Anne as well. For me, it's a cable character drama. A deep exploration into who these people really are, and an authentic exploration of their environment and circumstances."

Anne has "a documentary level of realism," agrees Miranda de Pencier, the series' executive producer, also on the set. "That's across the board in our costume and set design, the look of the show, and in the writing and performances."

R.H. Thomson, who spent the 1990s in Anne-world on the CBC series Avonlea, was pulled into the new Anne by "the depth of Moira's ambition for it," he says on-set. He plays Matthew Cuthbert, taciturn but goodhearted, who along with his no-nonsense sister Marilla (the British actress Geraldine James), adopts Anne (15-year-old Irish newcomer Amybeth McNulty).

"Twenty years ago, network TV was having a rough time," Thomson says. "The two-dimensional screen ended up in two-dimensional drama. That's death for actors, and for writers and directors. Then HBO, Netflix and others started doing drama in three and four dimensions. That's how Moira writes.

"Puberty, immigration, women's rights, child abuse, sexual abuse – was that happening in 1896?" he continues. "Of course. Does Moira refer to it? Of course. Does she push it in your face? No, she's better than that. But it sits there as background to this little girl's anguish and determination to survive. The character of Anne is in pain: She has no family, no place in the world. But that pain drives her intelligence, her imagination, her energy. That's the story Moira has gone after."

The producers found McNulty after auditioning 1,800 girls in an international search. She'd grown up outside Letterkenny, County Donegal, in a village "so tiny we don't have pavements," she says on-set, but she began acting in local musicals when she was 5, landed her first agent at 9 (incidentally, the same year she received the novel Anne of Green Gables for her birthday) and spent a summer in The Sound of Music in London's West End. After her taped audition for Anne made the final cut, she flew to Toronto and knocked everyone out. (Born a blonde, she also "bloomin' loves" her new red hair.)

"Moira's writing is not graphic, but it's fully brutal, fully honest," McNulty says. "It's very, 'Let's talk about things, let's get it out there, let's not be afraid of it.'"

De Pencier agrees: "[Anne] is a ferocious character, intelligent, thoughtful and full of heart, who comes into a tough world and infuses it with hope. And with a challenge to everyone around her to be authentic. And she happens to be a 13-year-old Canadian girl. That's cool."

Just before our interview, Walley-Beckett was listening to her hero, Gloria Steinem. "She was saying that when people have a competent, capable leader in the seat of power, we can sit back and say, 'That's handled,'" Walley-Beckett says. "But when we don't, that's the moment to activate, to rise, to speak up and fight for change. This is one of those moments."

So the leap from Breaking Bad, she says, is really no leap at all: "I want to be part of something that raises a voice to move forward. Anne does that for me." 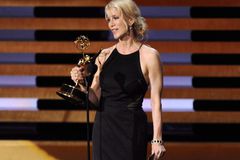