HANNAH CHEESMAN and MACKENZIE DONALDSON
Special to The Globe and Mail
Published January 30, 2015 Updated May 12, 2018

Meet Hannah and Mackenzie, two women standing at the intersection of legacy media and new tech, making "Internet odysseys," such as their new Web series Whatever, Linda, alongside television and films. In their second monthly column, they consider the challenges of being filmmakers in a male-dominated industry. Read more about their journey here.

At one of the first festivals we attended with our digital series Whatever, Linda, we'd had a pretty good, if not quaint, time in Vermont. We screened the show for a receptive audience for the first time, and garnered some serious buzz. People wanted to find and talk to us; they wanted to know who made this thing. But on our last morning there, a sunny fall day, right before our last screening Hannah was approached – or rather, waved down – by a New York producer. Seated in a lawn chair, wearing dark sunglasses and with a booming voice, he passively commanded, "Hey, you're that actress … from that series."

"Really," he said, eyebrows rising behind his glasses, "What made you wanna write?"

The incredulity in his voice, the unquestioning authority with which he spoke, the easy impassiveness, his refusal to stand up and shake hands, but rather his decision to sit back and receive her, as she stood awkwardly on the grass before him – might make for a good scene in a film.

But it engendered the predictable effect that so many belittling remarks do: It robbed Hannah of the rare experience that is being celebrated for one's talent, smarts, hard work and ambition. He was able to take a beautiful, celebratory day and make it grey; his words gave power to insecurities and drew nearer questions of legitimacy. What did make Hannah want to write? Why would Mackenzie want to produce that work? Or rather: What made them believe they could? Or should?

We continue to question why we let this particular producer's all-too-common attitude ruin our day, but we also find ourselves asking why it is that when most people – male or female – see something on screen, they instantly associate it with male creators? And why is it a surprise when something worth watching is created, produced, written or directed by a woman?

Is there something peculiar to filmmaking that accounts for the staggering statistical differences between the numbers of male directors and screenwriters, and their female counterparts? A 2013 study from the annual Celluloid Ceiling report found that in that year, 16 per cent of all directors, executive producers, producers, writers, cinematographers and editors on the top grossing U.S.-made films were women.

We approached Kay Armatage, professor emerita of cinema studies and women and gender studies at the University of Toronto, to gain insight. Armatage was keen to point out that this difference is "not about hormones. It's not about biology [and] it's not just a matter of encouraging women … it's about following the money."

If the Canadian film and TV industry is one supported through government subsidies, argues Armatage, it's up to funding agencies to be proactive and extend their "diversity checklist" to include women, thus better reflecting Canada's gender demographics. When a funding body counters that fewer applications come from women, Armatage says the question must become "how do we set about to get more applications [from women] and change the picture so that the playing field becomes more equal?"

Apparently some of Canada's leading funding bodies agree: Just this week, Bell Media mandated that 50 per cent of funds for BravoFACT and BravoFACTUAL programs go to female-led projects, more than $1-million in 2015, to be exact.

But for Carolle Brabant, executive director of federal funding agency Telefilm Canada, the question of proactive, mandated funding stipulations is something she struggles with. Instead of mandated change, Telefilm is involved with encouraging and promoting female filmmakers, as well as making female filmmakers more visible as role models, through initiatives such as the annual Birks Diamond Tribute to the Year's Women in Film (held during TIFF to celebrate, well, women in film). Brabant argues that this will, and already has, changed the landscape: "The proof is in the pudding" she says, noting that this year, 40 per cent of funds in Telefilm's $1.51-million Micro-Budget Production Program (funding that supports new filmmakers seeking to produce their first feature-length film) were awarded to women – based on merit alone.

Still, one thing remains constant for creators, regardless of gender: "Male or female," Brabant says, "directors must be given the opportunity to experiment and make mistakes."

Something that does not remain constant, though, is the language used for male and female directors. When speaking of women directing films, the "female" qualifier is ever-present; but when it comes to "male directors," Armatage says, "they're just called 'directors.'" The assumption that "filmmakers are male" persists.

We will say this: To us, it feels like the tides are slowly changing for our industry. There is a pulse in pop culture; women's issues are being discussed and debated. The recent news from BravoFACT and Brabant's statistics from Telefilm are examples of specific, positive changes happening in Canada.

But until we can all name more than a handful of female directors, or until it isn't a surprise when a show is written by a woman, we need to actively work for much greater change. So let's follow the money: If the Motion Picture Association of America is correct and female audiences comprise the majority of moviegoers worldwide (at 52 per cent), there's money to be made in giving them content created by female filmmakers, or at least featuring them: In the top 250 U.S. films in 2013, only 11 per cent of protagonists were female. Culture shapes our society and without diverse creators of that culture, audiences miss out on so many important stories and voices.

At the very end of the Vermont fest, we were still trying to shake the New York producer's comments. After our last screening of Whatever, Linda, heading to the car to drive the nine hours back to Toronto, a woman in her early 40s approached us. She was an ex-wife, a mother, some version of a single parent with a job and a life and a history. She opened by saying she didn't know anything about TV, assuring us many times of her lack of authority on the matter. But she spoke from the heart, from a place of feeling, and told us how much it meant for her to see that character, Linda. It spoke to her, deeply, to her experience in the world. She saw a version of herself on screen.

And this interaction, this woman telling us about that feeling, was the moment when – suddenly – Whatever, Linda became very real, very concrete. This was why we made Linda, and why we will continue to tell our stories. It was legitimate.

In their own words: Meet Hannah and Mackenzie, the women behind Whatever, Linda (and watch a new trailer)
May 12, 2018 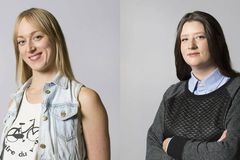 Hannah and Mackenzie: The Whatever, Linda team on the real reason filmmakers do festivals
May 12, 2018 Whatever, Linda: How two women are breaking out in a TV business that no longer plays by the rules
June 5, 2017
Follow us on Twitter @globearts Opens in a new window
Report an error Editorial code of conduct
Due to technical reasons, we have temporarily removed commenting from our articles. We hope to have this fixed soon. Thank you for your patience. If you are looking to give feedback on our new site, please send it along to feedback@globeandmail.com. If you want to write a letter to the editor, please forward to letters@globeandmail.com.
Comments