Everybody is a star in the sophomore season of Glee.

Last year's debut campaign of the hit series introduced viewers to a core group of earnest teens singing and dancing their way through the American high-school experience. The much-anticipated second season widens the spotlight to the rest of the school.

"Everyone gets a chance to shine this season," said Glee co-creator and executive producer Ryan Murphy in an interview during the recent TV critics' tour. "Instead of going bigger and overstuffing Season 2, which people would expect, we're going under it. We'll pick up on the stories of our main cast, but we're also going to spend time on the support characters. Everyone gets their moment."

This notion of everyone getting their chance to shine probably runs opposite to the way things work in real high school and partly explains the show's freakish appeal. For many viewers, Tuesday night's return of Glee (Fox, Global at 8 p.m.) is a much bigger deal than any of the new fall arrivals.

With the possible exception of Mad Men, no network program in recent memory has generated its volume of viewer buzz or spawned more fan websites. The very uniqueness of the concept -was it a comedy, music or drama? - knocked the TV world on its ear and the word "Gleek" suddenly entered the language.

No question, Glee has pull with young fans, but the show also resonates strongly with twenty- and thirtysomethings and beyond, if only because at some point all of us were forced to endure the high-school rite of passage.

"The reason high-school shows work, and college shows do not, is because high-school shows are about firsts," said Murphy. "First love, first kiss, first fight. And one of the concepts is, when you're in high school, at moments it feels like a suddenly bright spotlight hits you and you feel very exposed, which is a sort of hyper-surreal place. That's why we do those moments."

Invariably, those special moments are expressed in song. Glee lives and dies on its splashy music numbers and the show has drawn hundreds of millions of visitors to YouTube and fan sites.

Part of the first season's success was due to a shrewd marketing ploy by Fox: A few days before each new broadcast, the network would release that episode's songs - which immediately went viral. When Glee returned from its mid-season break last spring, the show had nearly doubled its audience.

And musical range? Glee accomplished the seemingly impossible task of re-imagining versions of top-40 songs in between makeovers of eighties hits (the Glee version of Journey's Don't Stop Believin' charted higher than the original 1981 single) and even the occasional Broadway show tune.

"I got a great thrill seeing something from Funny Girl in the iTunes Top 3," said Murphy, who also created the cable series Nip/Tuck. "And then, you know, the original versions of those songs then rechart, which is amazing for me, because I love all those songs."

Some outings of Glee are more special than others. The first season featured themed episodes celebrating the music of Lady Gaga, Beyoncé and other artists; the Madonna episode featured no less than nine musical tributes to the Material Girl.

Tonight's second-season opener, titled Auditions, picks up the stories of the central players - specifically the singing quarterback Finn, played by Calgary-born Cory Monteith, and his beloved teen chanteuse Rachel (Lea Michele) - while fleshing out those of new arrivals Sam (Chord Overstreet) and the exchange student Sunshine, played by pop star Charice. Future episodes will spread the storyline out to those characters who were faces in the crowd last season.

"Fans of the show really want to know more about the support characters, like Santana, Brittany and Mike Chang," said Murphy. "Although they appeared only briefly in the first season, some already have mini fan websites. All of them will be getting bigger storylines this year."

How deep into the wings will the new season go? At some point, viewers should expect some insight into the heretofore silent piano player portrayed by Brad Ellis - still listed only as piano/accompanist on the show credits - who is usually shown glowering at the warbling high-schoolers.

"I've only ever given him one direction, which is: 'You hate those kids,' " said Murphy. "He hasn't had any lines yet, but we have a whole backstory where he goes home and does voodoo dolls. He hates those kids."

Both Fox and the Glee creators are planning for the long run. And in little more than a year, the Glee stock has soared. The Season 1 box set, released a week ago, currently sits atop the DVD bestseller lists in Canada and the United States. There's also been the briskly selling Glee CD, Glee lunchboxes, Glee T-shirts and a series of officially sanctioned Glee novels based on the show's characters.

"I'm very proud of the merchandise we have coming out," said Murphy. "Because for every two things that I approve, I turn down 10. The novels are for young adults … I like what they're about. We clearly did not write them. We don't have the time."

In many ways, Glee is not unlike a corporate entity, with Murphy serving as CEO. During Fox's stint on the TV critics' tour, the first Glee volley was a brisk question-and-answer session with Murphy, co-creator Ian Brennan and the show's choreographer, music director and costume designer; the overall tone was not unlike a shareholder's meeting. Thereafter most of the promotional legwork for the new season fell to the show's cast.

Later that same day, Glee's most recognizable star, Jane Lynch, who plays tough-as-nails-gym-coach Sue Sylvester, was the main attraction at Fox's All-Star party on the Santa Monica Pier. The strikingly tall actress was mobbed by fans on arrival.

"After a lot of years in this business, Sue has been an unbelievable gift for me," said Lynch, a few weeks before she would collect her first Emmy for the role. "Certainly Sue's an over-the-top character, but she's unique and honest in her own unpleasant way. She gives me a lot to play with."

"We try not to idealize him, but he's the sort of person born to become a teacher," said Morrison at the same soiree. "The one thing we keep hearing from younger fans is that the show is so grounded in the realities of high school today. We take pride in the fact that the show has caused a lot of schools to form their own glee clubs. Kids need to have that kind of creative outlet."

And so far, so good. Glee-mania burned at fever pitch most of last season, but the peak occurred in April, when the show's cast and producers appeared on The Oprah Winfrey Show and visited the White House in the same week.

"Right after that I had a meeting with all the kids in my office," recalled Murphy. "We went around the table and talked about where we were one year earlier. Most of the kids didn't have jobs. One was working at a gas station. They really got back in touch with where they came from. They're all sweet and lovely kids. Nobody is letting the success go to their head." 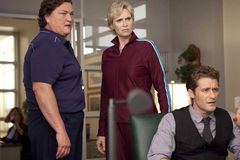