During the Olympics, CBC gave heavy promotion to its new mini-series Caught. The flashy ads were everywhere. The wailing Creedence Clearwater Revival music, handsome fellas in undone shirts, sultry women in bikinis in a sunny setting and Paul Gross muttering something.

It was, however, hard to tell what the series is about. (The Brother said to me one night after yet another ad for Caught, "What's that thing about, what's the plot?" I could only say, "I don't know." And he added, "Me neither.") You could only conclude that the setting was some decades back.

It is a relief to report that Caught (Monday, CBC, 9 p.m.) is, in fact, a terrific thriller with a lot of style and substance. It's a sizzler, and we're not just talking about the hot sun in Mexico where some of the story is set. It's a rush, a race from the ghosts of the past and, at the same time, a frantic fight to embrace the benign heart of the past.

Based on Lisa Moore's 2013 novel of the same title, it kick-starts in 1978, in New Brunswick. Dave Slaney (Allan Hawco) has busted out of Dorchester Penitentiary and is on the lam. He gets a ride, is deposited in a trailer out back of a strip club somewhere and starts making plans. He's a convicted drug smuggler, that's clear, and he gets on the phone to his former partner in crime, one Brian Hearn (Eric Johnson, who is a first-rate dangerous sleaze here) who seems to be living it up in Mexico. It's tense, and the viewer gets the picture, since Slaney's raggedly on the lam while Hearn is in the lap of luxury in sunny climes.

There are flashes from the past, the two guys starting out in the drug-running racket in Newfoundland with a wee boat. Back then, they were like ambitious adolescents with Hearn the charismatic leaner and manipulator. In the now, there's something odd about Slaney's breakout from jail, and it all seems so planned.

It is. Slaney's jailbreak has been, essentially, carefully staged and the cops want him to lead them to Hearn. At least, that's what Slaney believes. It isn't quite what he thinks, though, and during a ride with the main cop, Roy Patterson (that's Paul Gross, who does mutter a bit too often) it becomes obvious that Slaney is being played. Things are even more ragged and fraught that he thought. He wanted something out of this deal and reaching his own goal is in serious jeopardy. Meanwhile in Mexico, Hearn's antics are anchored in macho rage and there's a lot of testosterone fuelling acrimony and fury.

What Caught amounts to is a splendid, propulsive cat-and-mouse game. It's a very entertaining thriller that uses the 1970s setting to great effect. Everybody smokes, drinks, swears and every man treats women as decorations or servants. This adaptation uses the sexism of its time setting as a way of unsettling the audience and as a kind of torque to keep the velocity going.

Sexism is certainly at the heart of what draws one cop, KC Williams (Enuka Okuma) into the narrative. She's a good cop patronized by male colleagues and bosses and when Patterson offers her a chance to help capture Hearn, as a way to snag an even bigger, more elusive drug dealer, she's in. Everybody is after one big score in Caught. The drug runner, the cops and then there's Slaney, whose big score is getting back the lost love of his life.

Moore's novel deftly intertwined the crime-caper, who's-zooming-who plot with a rich portrait of Slaney's earlier life in Newfoundland, and a deep reach inside the bitter, grizzled mind of Patterson, giving complex texture to a thriller plot. There can't be the same ample texture to the TV adaptation, since we cannot get inside the two male brains in the same way. But Hawco, who did much of the adapting with John Krizanc and Perry Chafe, does take the audience into the hopes, fears, mistakes and fidelities of the younger Slaney.

This is very much Hawco's series in that he runs the show and plays the central character with aplomb, but he doesn't loom over it. Tori Anderson is brilliant as Ada, the flinty young woman caught in the shenanigans and Charlotte Sullivan is outstanding as a woman left behind by the madness in this fine, entertaining thriller about betrayal, male swagger and getting even.

Review: Cottagers and Indians is a charmingly low-key production with no heroes or villains
Subscriber content
February 23, 2018 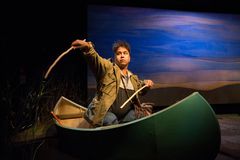 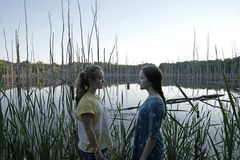 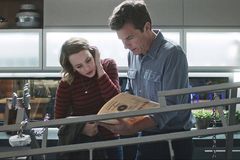