Something unusual happens when Chris Haddock shoots on location in Vancouver. Fans passing by the set generally recognize not one of the stars of the show – as they might if encountering, say, an X-Files or Once Upon A Time shoot; it's the showrunner they get excited about. Haddock is physically recognizable – that weathered face, that straggly hair, that ever-present cigar – but also recognized for what he has done for television in this city. He has created TV properties (Da Vinci's Inquest, Intelligence) that have put Vancouver on the map and on the screen as itself – and he has made them good; early examples of the high-quality television Canadians are capable of creating. We're more than a stand-in for Seattle or Storybrooke. Haddock demonstrated that this is a city with its own stories.

"When people recognize me, there's a great feeling of seeing Vancouver represented," Haddock says after a brief sidewalk chat with some fans. "I enjoy taking on that challenge – [and hope] not to [mess] it up."

Back after a long absence and an initially bitter separation from the CBC, Haddock has a new series premiering this week on the public broadcaster. The Romeo Section once again puts Vancouver centre stage. This time, rather than focusing on its grittier side, Haddock has much of the action take place in an academic setting modelled on the University of British Columbia. The series also gives the city's Asian influences a much-deserved close-up.

"This is what we're trying to do – create the [TV] equivalent of a Vancouver sound in music," explains Haddock, 63.

In the show, Wolfgang McGee (Andrew Airlie) is a university professor with an intelligence gig on the side. When he meets a colleague, Asian studies Professor Lily Song (Jemmy Chen – a former Da Vinci's Inquest extra in her first lead role), it may be love, or perhaps it's her potential as a spy that has attracted him. The show is ambitious – with a look inspired by Tinker Tailor Soldier Spy (and, to a lesser extent, The Godfather) and several connected storylines. But Haddock says its strength is good, old-fashioned storytelling.

"It's sort of a counterintuitive approach because in a lot of the pitches I went on over the last couple of years, many of the network executives are saying we need a noisy show," Haddock said on-set back in the summer when he was shooting the second episode. "And I just feel … there's a general kind of a move out there by people who are looking for adult drama, are actually looking for something a little less noisy and looking for something that isn't gimmick-driven."

Haddock's successful run with the CBC began with Da Vinci's Inquest in 1998 and ended abruptly when Intelligence was cancelled in 2008 after two seasons. (The show is still considered a critical darling; in 2012, Breaking Bad creator Vince Gilligan called it "a tremendously written show.")

Haddock, who remains based in Vancouver, left for a while to work on HBO's Boardwalk Empire in New York. The gig taught him to make the creative process as efficient and transparent as possible, he says, in order to get the best possible input and performance from his creative collaborators.

Airlie, who appeared on Intelligence and Da Vinci's Inquest, calls Haddock a "remarkably consistent" straight shooter, who is "fantastic" to work with. "It's a level of both creative satisfaction and collaboration that you as an actor … just don't get that often," Airlie says from his Vancouver home. "He has the story in his head; it's always moving, pieces are changing, he works on the fly, he sees what works and what doesn't land, and he adjusts. But he welcomes your collaboration in that process, which is just utterly rare in TV."

The show is being created largely out of Vancouver's old post office building downtown. The nearly empty place (which has been sold for redevelopment) has become a sort of production hub for the show – with offices turned into sets, edit suites, wardrobe and prop shops; and a cavernous former basement mail-sorting area now used for set storage. Even an outdoor rooftop space has been transformed to resemble the university grounds.

Haddock knows the university setting and feel intimately. His own father was a forestry professor at UBC. And during our conversation (throughout which he is respectfully shushed numerous times by careful production staff as the cameras roll – requests Haddock pretty much ignores), it becomes clear that his father was an important influence on this endeavour. Not only was he a professor, but he also worked in intelligence, Haddock explains, during the Second World War. And he was a James Bond fanatic – so there were lots of books around for his son to borrow, helping to build an imagination steeped in espionage and mystery.

In fact, Wolfgang's office is modelled on the building his father worked in at UBC. "I used to throw stones at his window and tell him he's late for dinner," recalls Haddock, who would ride over on his bicycle from where they lived.

Haddock is at home in every way on this set – back at CBC again, working with old colleagues, and shooting all over Vancouver, a city where he knows "all the corners," he says. This time he's going for beauty shots – not exactly how you would describe his previous Vancouver shows.

Even with the stresses of the ambitious series – and its Canadian broadcasting budget – Haddock seems calm, happy, energized.

"I don't want to present any false humility," he says. "I'm glad that I've been this successful and I'm glad I've been doing it here. And I think probably anything we'll do in the future will probably be here."

CBC’s newest Dragon on becoming the beer baron and giving back
October 2, 2015 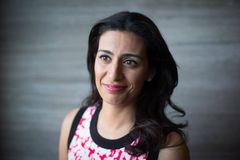 John Doyle: CBC’s This Life: Not deep, but touching, humorous and admirable
October 4, 2015 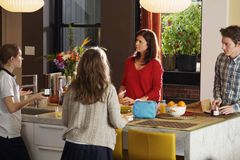 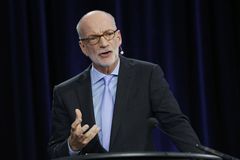