The opening show of W5's 46th season is all about Conrad Black. Lisa LaFlamme, now ensconced as CTV National News's chief anchor, delivers what's promised as "a candid interview with the once-powerful media mogul." Unless one has read his new book on his prison experience, one can't be sure how much he's recycling stories in the book, but he's certainly selling. His description of arriving in prison is delivered with vivid details. The Mafia Don who told him, "If you catch a cold we'll find out who you got it from." The strip search that didn't bother him much, because "I went to a boarding school." Black says he was not afraid, but "fretful and curious." And of course, on his first day in prison he happened to meet a Wall Street Journal reader who recognized him. Well, he would, wouldn't he?

This HBO movie first aired in April on a crowded night for good TV. It's a dramatization of the making of the controversial 1973 PBS documentary series An American Family, now considered the first time that "documentary" became "reality-TV." The series was the idea of New York producer Craig Gilbert (played here by James Gandolfini, Tony on The Sopranos) who sold PBS on the idea but needed the right type of family. He wanted it to be "pure" documentary. In Santa Barbara, Calif., he found Pat and Bill Loud (Diane Lane, Tim Robbins) and their five children, and started filming. As we see here, the pressure of being on-camera and the ensuing fame had a crushing effect on the family. Divorce was in the air several episodes in. What we get here is a complex story of the pressure of media fame reduced to a simply but accurately delivered cautionary tale.

Jane Lynch from Glee hosts and, with luck, can manage to be witty all through a marathon awards show. Certainly she will sing. There might even be a big Glee-inspired production number. After all, Glee is a Fox show and this year Fox airs the Emmys. Of course, a vast army of TV stars will appear as presenters. The first batch announced includes Amy Poehler, Will Arnett, Julianna Margulies and Zooey Deschanel. Some are promoting their new shows (you'll see a lot of promos for new Fox shows Sunday night in commercial breaks) by their mere presence, but the most anticipated presenter must be Ashton Kutcher, whose run on Two and a Half Men starts on Monday. Will he make a Charlie Sheen joke? The consensus in advance is that Mad Men and Modern Family will win everything.

It's here – the show celebrating cover versions of Canadian-made songs will be hosted by Nicole Appleton. Eight acts will be revealed on Sunday's premiere and perform live in a bid to win fame, a $100,000 cash prize and a recording contract for an original single to be released by Universal Music Canada. The judges are Jordan Knight (New Kids on the Block), R&B singer Deborah Cox, record exec Ron Fair. Apparently Hawksley Workman and Gavin Brown are the Canadian producers who will be working with the eight finalists. Taking Care of Business, American Woman, You Ain't Seen Nothing Yet. Yeah, yeah, yeah. Also starting on CBC is the new season of Battle of the Blades, 8 p.m. It will include a memorial to former NHL star Wade Belak, who was scheduled to participate this season and who died during rehearsals.

Cancel the dance show and cheat a child. Nice
September 15, 2011 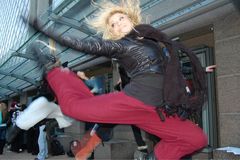 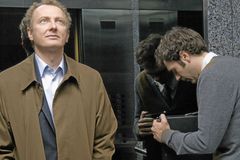 The new Camelot: perky posteriors and a surfer-dude king
September 13, 2011 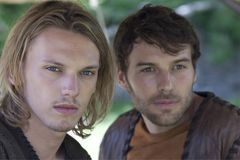