What a long, strange trip it's been (and other yearbook-appropriate sentiments I'll say as much as I want). As of July, we're all graduating – Degrassi is over.

With news this week that MTV is pulling the plug on the television series after 14 seasons, an important chapter of original Canadian programming has closed. Considering the Degrassi franchise began in the 1980s with a show starring a boy named Joey Jeremiah and his collection of hats, it's a miracle that any franchise (let alone one born and bred in Canada) managed to sustain a reboot that was a mix of pure soap and increasingly dark teen melodrama, and populated by a revolving door of characters who became more compelling (and sometimes even unbelievable) than the last.

After all, The O.C. killed Marissa, and the series went south and got cancelled. Gossip Girl delivered a buffet of "oh hell no" teen rebellion, and ended with a whimper. Veronica Mars got axed after three seasons for being too smart (or too real – which Degrassi is often). And yet for 14 seasons, Degrassi sustained.

The series never shied away from real-life subject matter, whether it be a character coming to terms with his sexuality, one trying to rebuild his life after being shot or another trying to deal with her sexual assault. It also never offered closure: Episodes were often left on a "what the hell just happened?" note, forcing us to examine and process plot developments as if we'd experienced them, too. Naturally, because the writers weren't sadists, said conflict would be resurrected eventually, but by then we'd manage to work out our feelings on our own. How many times did an episode end with a character saying something upsettingly dark, only to have the closing credits follow? (No less than a million, and whether or not that number is logically possible doesn't matter right now.) Degrassi became an emotional and social tour guide – one that occasionally left us for dead in the forest.

Degrassi also offered another unique element to the teen TV landscape: It showcased the talent of another pop-culture phenomenon, whose musical clout rivals Kanye West's. (Yeah, I said it.) So while Nina Dobrev (Vampire Diaries) and Shenae Grimes (90210) may have gone on to dominate the acting sphere, the overall pop-culture MVP was Aubrey Graham, a.k.a. Wheelchair Jimmy, a.k.a. Drizzy Drake (a.k.a. Captain Toronto), who debuted his knack for emoting on-screen as his character came to terms with his paralysis. Not even Dawson's Creek managed that.

Ultimately, Degrassi – while dramatic, upsetting and at times too confusing for my adult brain – was a television anomaly. It took time to develop complex narratives with what felt like an ever-changing cast of characters. It delved into topics the CW only grazed over. And it assured us that if Drake ever has a change of heart, he could probably eclipse Eminem's turn in 8 Mile.

So, while Degrassi was a Canadian phenomenon, it was also just a phenomenon. After all, how else can you explain the goings-on of a high school whose antics never made the news? 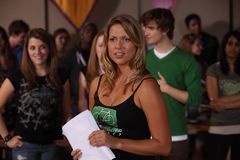