One is a doctor in real life, the other plays one alongside Clive Owen in Steven Soderbergh's television show, The Knick. But Dr. Brian Goldman, host of CBC Radio's White Coat, Black Art, and Edmonton-born actor Eric Johnson could both stitch you up in an emergency. The two recently sat down to discuss the fascination of medical dramas, the best doctors in TV history and who's got the skills to save the day when the zombie apocalypse comes.

What bothers you most about the portrayal of doctors on TV?

There's no steamy romance at your hospital?

Goldman: In an emergency department? Who has time? I don't have time to pee.

Johnson: You can only do life-and-death stakes and win so many times before it becomes just trivialized. One of the things I loved about The Knick is that we're very rarely successful in what we do.

Why do you think medical dramas are so consistently popular?

Johnson: It's a vulnerable feeling when you're at the doctor because you're putting so much trust in them. So you want to believe they're these incredible men and women that are going to know everything and be able to save you no matter what.

Goldman: It starts with the stories. When you're thinking about human drama, lives in jeopardy, you can't beat the stakes in stories like that.

Who is your favourite television doctor of all time?

Goldman: When I was a kid, Ben Casey. He was kind of crazy. He was a wound-up-tight guy, and I liked the complexity about that. Later, Dr. Mark Green from ER.

Johnson: Hawkeye Pierce, from M*A*S*H. I loved that show. I was a kid watching it – I don't think I understood the complexity of what it was saying in a lot of ways. But I loved that show in how it could be funny and be so human at the same time, and how he could be such a [jerk] at times but he also just cared so much. Everything was about the patient for him.

Goldman: He was probably the first fairly accurate portrayal of a physician with post-traumatic stress disorder.

What's the highest compliment someone in your profession could pay you?

Goldman: Humbly, the highest compliment is to be physically present and to say, "Brian, here's my husband. You saw him in [the emergency department] three years ago and he's still alive and he's still well." Anything more than that is gravy.

Johnson: The highest compliment you can pay an actor is when somebody reveals that you moved them emotionally. And it could be in any way. It could be, "Oh, I hated you in that show!" or "You made me laugh so hard." For a moment you alter their experience in life by something you did.

How do you deal with your critics?

Goldman: Ultimately, at some point, you have to search your own heart and ask the question, Are they right? The other thing that you do is rationalize. I say, at least they're talking about it. I think the one thing that would be worse than people criticizing me would be people ignoring me completely.

Johnson: As long as people are engaged, it doesn't matter to me if someone says, "I hate you on that show." The biggest worry I have being a doctor on TV is looking like a fraud. It's like any performance – you want to look like you know what you're doing. I spent way too long, it turned out, constantly practising my sutures last year because I didn't want to look like an idiot suturing.

Brian, you're a big fan of The Knick. Are there any questions you want to ask Eric?

Goldman: Dr. Stanley Burns [the medical adviser for The Knick] taught you how to do stitches. What was the experience like of learning how to suture?

Johnson: What fascinated me was thinking I've got to learn to suture the way they did in 1900, thinking it was a different style, a different way of doing it, and realizing it's exactly the same. I know there's different sutures you can do, but the basic suture hasn't changed.

Goldman: So now that you're good at suturing, you're at a cottage, somebody has a cut, somebody hands you a suture and a needle driver, [you're] on it?

Johnson: Zombie apocalypse, I got you. Seriously, I felt overly confident in my abilities. That's how good Dr. Burns was. I honestly felt at the end of that [training] that I could remove your gall bladder confidently and that you would be fine.

Why showrunners turn to fans and social media
December 11, 2014 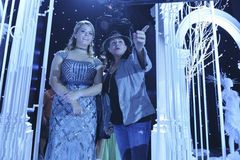 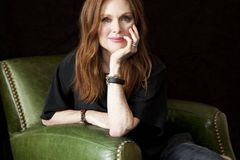 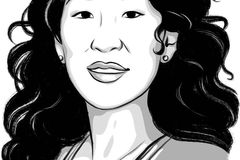