You can probably see Andrew Scheer's grin from outer space. It's that lustrous.

It works a charm, that grin. Certainly, on the evidence of the few hours after his shock victory at the Conservative leadership convention on Saturday, Scheer can charm and seduce big-shot TV anchors and reporters. He grins, goes all "aw, shucks" and stays positive. That's him on TV, but can he charm all the viewers and voters, too? That's a far more gnarly task.

Minutes after he won, he joined the CBC TV coverage panel. Peter Mansbridge felt moved to put a hand on Scheer's shoulder. Scheer did an "aw, shucks" and said, "You're going to make me tear up, Peter," when Mansbridge asked about the new leader's late mom. Then Rosemary Barton got into a chuckle-fest with Scheer, suggesting he's even sunnier than Justin Trudeau.

Thing is, for all the affability and aw-shucks ease, it's hard to discern his message, his beliefs and his principles. Watch him on TV and you wonder, "What's he up to?"

Scheer sure is angry with the Prime Minister and wants him out. But he's angry in a weirdly indirect way. He talks about Justin Trudeau's "selfies and promotion" with the derision born of schoolyard envy of the cool kid. One of his continuing themes is that he ran for the leadership so that "Justin Trudeau can't do to my kids what his father did to my generation." Exactly what Pierre Trudeau did to damage a young man who got a university education, has already spent years as an MP and was Speaker of the House at age 32 is a mystery. What's his beef, exactly?

He also talks in riddles: "In the name of tolerance, the Liberals have become intolerant," he declared in a TV press conference. This, one gathers, has something to do with an excess of perceived political correctness at universities and the issue of academics being able to speak their mind, expressing controversial views. Watching and listening, you're thinking, if this is what has them in a lather in Scheer's Saskatchewan riding, then they have copious time on their hands.

It's all said with a grin, of course. And an insistence by Scheer that he's "positive." In this, he is an unusually gifted TV personality for a politician. The audience projects hope onto such people, reassured and charmed by the confidence. And there's admiration of the unruffled, relaxed and self-deprecating manner. Other politicians can seem self-conscious when they complain or rant, but Scheer is the rare sort of politician who seems fully at peace with himself. Watch Scheer closely on TV and you intuit how good he is at it.

Such attributes are excellent in a media-saturated age, but to be successful, they must be used to deliver a discernible message. Some solution or plan sold effectively using innate skill. In his televised, postvictory speech, Scheer promised to keep the party true to its Conservative roots, on the side of average Canadian families and not "Ottawa insiders." As if a former Speaker, elected party leader with vast support from his caucus and professionally chummy with Peter Mansbridge and Rosemary Barton wasn't already the definition of "Ottawa insider."

Scheer says all the right things on TV in a temporarily convincing manner – he talks about "fundamental principles" and "protecting rights" and says, "The leader's job is to pick the common ground." This sort of sloganeering is what he means when he says, "I have a positive spin on everything."

Staying positive is an excellent communications tool. As is staying negative. The latter point is underlined by Donald Trump's success. And yet while he insists he's positive, if we look at why Andrew Scheer won that leadership it is, apparently, because of support for his negative views.

He was or is anti-abortion; against the legalization of marijuana; voted against the bill to legalize medically assisted dying and wants Canada to support refugees through private sponsorship instead of government sponsorship.

That's harsh and no grin can hide it. His views on the CBC itself are also harsh – he thinks it shouldn't be in the news business and thinks that the existence of the public broadcaster means " the government is in the news business." A view not merely harsh but harebrained.

Still, he's grinning, cheery and utterly at ease on TV, and that's significant, making him an unusual kind of Conservative. He's good at media, especially TV, from which the majority of people learn about political figures, and he knows it. But while that grin is so beaming it might be seen from outer space, his core seems to exist in that empty space between positive and negative. Television can destroy such people. Not through any bias, but through the dynamic of the medium's delivery of the message. After the grinning comes a message and, so far, Scheer's message is nowhere to be found.

Editor’s note: An earlier version of this column said new Conservative Party Leader Andrew Scheer once declared the bill to legalize same-sex marriage “abhorrent to me, to other Catholics and to every member of every faith community.” In fact, Mr. Scheer was referring to the fact Calgary Bishop Frederick Henry had been forced to defend the Catholic Church’s teachings on same-sex marriage before a human rights tribunal. 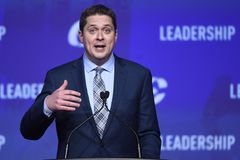