Not long ago, an invitation arrived from Netflix to watch a media-only link to The OA. The title meant nothing to me and Netflix PR didn't offer much information. A heavy-duty embargo had to be signed. That was some kind of hint. Access was duly given.

Early this week, Netflix finally announced the mysterious series would start streaming on Friday and a short trailer was released. It was all very elliptical and odd. Now, a lot can be revealed.

The OA is Netflix's strongest and strangest original production since Stranger Things. In terms of substantive, original drama, it transcends it. Mind you, it is unclassifiable in the context of drama, mystery, science-fiction and fantasy, since it is straddling all sorts of lines and blurring them. It is outright astounding and brilliant, too.

In essence it's about a woman named Prairie Johnson (Brit Marling), who went missing seven years before the opening events. When she went missing, she was blind, but when she returns, so has her sight. She refuses to talk about what happened to her. She won't say if she was abducted or fled. She won't say how her sight was restored. Her answer to most questions is, "I don't know." But you can tell she does. She also recoils from touching.

At first, she's treated as a novelty by the media and the community, and the police and FBI are cautious, believing she is suffering trauma. Certainly she has many real scars on her skin.

But soon it becomes clear that Prairie, who declines to acknowledge her name and wants to be called "The OA," has her own plans. She keeps trying to contact somebody online, but her online activities are limited and monitored by her parents. She wanders her suburban neighbourhood and something about her spooks others. Does she have some mysterious power or secret? It's anybody's guess. Then, she strikes up the most unlikely of friendships with Steve (Patrick Gibson), a neighbourhood bully who is about to be tossed out of school for sociopathic behaviour. He's a very menacing figure but Prairie/The OA is unafraid of him. Eventually she persuades him to help her with what she calls "getting somewhere," and he does, and things get profoundly wondrous.

Not much more can be given away, except perhaps to say that the narrative becomes anchored for a while in a snowy Russia where oligarchs have vast amounts of money, and that seems to offend certain mysterious powers. Visually, the series becomes stunningly beguiling.

The key to the production and what harbours its power, though, is in the first hour, which unfolds in a cool, jittery manner. The central character's hometown setting is very ordinary, and shot in a grey, early-winter light. The texture of it is chillingly authentic – the casual sex and violence of suburban alpha males, the dull streets and malls of any town, anywhere. If there is anything magical residing in this story it must be well hidden, almost unknowable. And it turns out this grey suburban world is evanescent.

First, the drama seems drenched in teenage anomie and goes forward with a stark, naturalistic approach. Then the poetry emerges with a kind of urgency and turns flamboyant. The naturalism of the opening only accentuates the florid, fantastical realm that follows.

Netflix's brief advance description of the series is this: "The OA is a powerful, mind-bending tale about identity, human connection and the borders between life and death." The "mind-bending" part is true. But if you're an adult you must be invested in the central characters to have any curiosity about having your mind bent. And Marling (the co-creator with partner Zal Batmanglij, who directs all eight episodes) does an astounding – and award-baiting – job. Everything hinges on her character; someone who longs desperately for something, and you cannot help but will her onward.

Some attention has been paid in advance to Netflix getting Marling and Batmanglij on board, they being acclaimed independent filmmakers, the sort whose work – the movies Sound of My Voice and The East – has been highly praised at Sundance. The insinuation has been that Netflix is expanding into some kind of non-mainstream storytelling. That's a stretch. The outrageous ambition shown in The OA requires the kind of deep pockets and artistic freedom that Netflix offers.

The upshot is a dazzling drama of challenging but captivating, hallucinatory lyricism and it – certainly the first episodes – is never less than absorbing. And, yes, mind-bending.

The Jinx: The Life and Deaths of Robert Durst (Sunday, HBO Canada, 8 p.m.) gets a marathon airing. All six episodes are being shown. And it's brilliant, true-crime storytelling. Made by Andrew Jarecki and Marc Smerling (the Oscar nominees behind Capturing the Friedmans), it tracks the disturbing history of U.S. real estate heir Robert Durst, long suspected in the 1982 disappearance of his wife as well as the subsequent murders of a family friend and a neighbour. 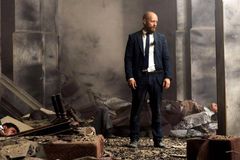 John Doyle: Golden Globe TV nominations are good, bad, strange as usual
December 12, 2016
John Doyle: BBC’s The Hollow Crown offers thrilling holiday viewing
December 9, 2016
Follow John Doyle on Twitter @MisterJohnDoyle
Report an error Editorial code of conduct
Due to technical reasons, we have temporarily removed commenting from our articles. We hope to have this fixed soon. Thank you for your patience. If you are looking to give feedback on our new site, please send it along to feedback@globeandmail.com. If you want to write a letter to the editor, please forward to letters@globeandmail.com.
Comments