There is a school of thought which holds that The Great British Bake Off is responsible for Britain voting by a slim majority to exit the European Union. And there is a corresponding view – not exactly a school of thought, but an attitude – that what later happened to the show is a lesson in how naive the pro-Brexit forces have always been.

Season seven of The Great British Bake Off begins airing on CBC this week (Wednesday at 8 p.m.). This is vaguely important for two reasons. First, the idea is to get viewers in a lather about the upcoming Canadian version of the show, coming later on CBC. Second, the seventh season is the last one made for the BBC. The eighth season will finally begin next week in Britain, on Channel 4, and, like post-Brexit Britain, it will not be the same.

The series has been an unlikely TV phenomenon. In 2014, it was drawing viewer numbers close to the ratings for England's games at the World Cup that year. The season finale in 2015 was the most-watched program of the year.

This, mind you, for a program that the producers initially found hard to sell. There are a lot of competitive reality-TV programs airing in Britain but the initial pitch – a baking competition among ordinary people, much like those at an annual "village fête" – did not have broadcasters signing cheques and rubbing their hands with glee. It all sounded so dull and twee. The premise was to do the baking competition in a tent in rural England and employ hosts and judges who would be less like Gordon Ramsay and more like an encouraging aunt. "How's the gingerbread coming along, dearie?" "Ooh, it's doing all right, innit?" "Well done, dearie."

Then, when it was finally produced for the BBC's secondary channel, BBC Two, the show took off like a rocket.

Its magic is mercurial and more intuitive than planned, one suspects. (It has aired on many PBS stations, too, having a near Downton Abbey-type impact.) It is very quiet whereas most competitive reality shows are loud, fast paced and involve shouting. Nobody involved speaks directly to the camera and stabs somebody else in the back. There are 12 amateur bakers and each episode has them assigned to follow a baking theme, such as bread. The hosts mosey around the events being jolly and encouraging and the judges encourage, too. Occasionally there's a bit of tut-tutting. Or, "Oh, dear!"

Part of the charm is what is being baked. Viewers are nostalgic for a time when meals inevitably ended with desserts, pastries were consumed without guilt and nobody thought twice about consuming loads of bread. The show takes people back to a time when calories weren't counted and only oddballs went to a gym to work off dinners of stodge followed by plates of cake and biscuits.

The ambience is also very old-school England. Not necessarily British, really, but definitely England. It is created, in part, by the hosts, or "presenters" in British TV parlance – the dryly funny Sue Perkins and Mel Giedroyc. A Guardian review called their style, "end-of-pier, Carry On-style humour." That's very apt. The gentle wit and sometimes broad, double-entendre joking harkens back to a British comic tradition that includes the music hall, bawdy seaside postcards and flibbertigibbet humour of the Carry On movies.

This is where the connection to Brexit comes in. The fetishizing of Britain's decline is a staple of the British popular culture, especially in television. The Great British Bake Off, like a lot of series – Downton Abbey, Midsomer Murders, Foyle's War, Call the Midwife – harkens back to a past that is glorified as good, stable and, really, a lost utopia. Contrasted with a contemporary more chaotic and distinctly multicultural Britain, these shows bolster the idea of separating from the present and embracing a future that is anchored in a lost, fondly remembered past. Nothing in the British culture is as escapist as it seems.

What happened next in the saga of The Great British Bake Off is a cautionary tale. The BBC itself described it as a "quintessentially BBC" production, "in which nice people cope with some mild pastry-related jeopardy."

But Channel 4 offered millions more to the production company and the show decamped to the commercial channel. Mel and Sue will not be part of it and the most beloved of the judges, Mary Berry, isn't going to Channel 4 either. It won't be the same. It cannot be, just as a post-Brexit Britain will not and cannot be what many people there expect it will be.

As for the CBC's spinoff, The Great Canadian Baking Show, it will arrive in November and the slate of "celebrity judges and hosts" is known. Vancouver pastry chef Bruno Feldeisen and Quebec-born, Australia-based pastry chef Rochelle Adonis will judge the amateur bakers, while actors Dan Levy (Schitt's Creek) and Julia Chan (Saving Hope) will be the hosts. It cannot be judged in advance but we all know the CBC is not the BBC and given the twist of the tale of the Bake Off, the BBC isn't the BBC any more. 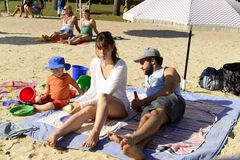