Jonathan Crombie became a Canadian icon for his heartfelt portrayal of dreamy Gilbert Blythe in the television adaptations of the Anne of Green Gables books. But he was much more than just a cute boy with a curly brown mop and puppy-dog eyes.

He was a talented and meticulous performer who had never acted on TV before he was cast as Gilbert – and he logged many hours of extra rehearsal time to hone the character. Later, when playing TV and theatre roles across North America, he would notate nearly every line of his scripts and work in advance and on set, obsessively perfecting his approach.

"He was the hardest working actor I've ever known," says long-time friend Bob Martin, an actor and writer who met Mr. Crombie in high school and often wrote parts for him.

Mr. Crombie, who died on April 15, divided his time between New York and Toronto and found success in both places. He loved challenging roles – not just romantic leads, but character and comedy parts, too – adored travel and travelling for work. He was an unapologetic penny-pincher who enjoyed board games and charmed friends with his good nature and sense of humour.

Mr. Crombie was born on Oct. 12, 1966, in Toronto, the youngest of David and Shirley Crombie's three children. His father – who became the mayor of Toronto in 1972 and moved into federal politics in 1978 – expected his son to love hockey. Carrie Crombie, the eldest sibling, recalls her little brother dressed in full hockey gear in his room. One time only.

Instead, his passion was the arts. An uncle would frequently drop off reams of paper and the younger Mr. Crombie would cover the sheets with drawings. He listened to records of the latest hit musicals and would perform faux commercials in front of the mirror.

His mother, Shirley, supported his passion by sending him off for a round of classes at Toronto's Young People's Theatre and taking him to auditions. In 1978, when David Crombie became a member of Parliament, the family moved to Ottawa. Young Jonathan took theatre classes there along with his sisters, Carrie and Robin.

Toronto's hold on them was strong, though. After just a year, the family decided to move back to their long-time home and David Crombie commuted between the two cities. The Crombie teens all went to Lawrence Park Collegiate Institute, which had a vibrant theatre program.

By Grade 11, Jonathan was playing major roles, such as Claudio (one of the romantic leads) in Much Ado About Nothing. John Mitchell – just a year older – had the part of the older love interest, Benedick. "He was miles ahead of everyone else," Mr. Mitchell recalls of his younger friend's skills on the stage.

A year later, Mr. Crombie took on rotating roles in Grease: Doody (one of the greasers) and the Teen Angel. The task seemed to instill a lifetime passion in Mr. Crombie for playing multiple roles in a show.

In Grade 13, the school staged The Wizard of Oz and friends recall that Mr. Crombie had his pick of roles, but wanted to focus on school. So the staff created a small part for him and wrote him a song.

Casting director Diane Polley (mother of director Sarah Polley) saw the production to check out the girl playing Dorothy and she noticed Mr. Crombie. "He had just a few minutes of stage time, and he was the one who stood out," Mr. Mitchell recalls.

Days later, Ms. Polley showed up at the offices of Sullivan Entertainment, claiming she'd found Gilbert Blythe for the forthcoming Anne of Green Gables movie. "Trust me, this is him," she told director Kevin Sullivan, who had already done hundreds of screen tests for the part.

Then, Ms. Polley struggled to find Mr. Crombie: It was December and for the first time ever, the Crombie family was in Florida for the holidays.

She eventually found them and convinced the family to take a photograph of Jonathan and courier it to the office.

The picture arrived and Mr. Sullivan agreed he had the right look. When Mr. Crombie finally came into the office, the part was pretty much cast. "We met and I didn't even have to test, I knew it would work," Mr. Sullivan recalls.

Mr. Crombie had little acting experience and had never done TV. But he and Megan Follows – already a veteran actor – would rehearse on their own to get it right, and she helped him hit his mark and deal with the cameras.

For the next few years, Mr. Crombie was something of a golden boy, appearing in films such as Bullies and A Judgment in Stone, as well as the follow-up Anne of Avonlea TV mini-series in 1987.

Meanwhile, he was also doing live theatre. His friends from high school – including Don McKellar, Bob Martin and Lisa Lambert – had started Child's Play Theatre, and he often acted in their shows.

Then, he was a part of Skippy's Rangers, an improv group formed in the late 1980s with Ms. Lambert, Mr. Martin and others. With this group, Mr. Crombie honed his comedy chops. Mr. Martin recalls one of his characters, a "wealthy playboy with a broken heart" who delivered a long and hilarious monologue in the middle of a sketch.

During this time, he also attended the University of Toronto's Victoria College and graduated in 1995.

He worked at the Stratford Festival, performing in four seasons and playing leading roles in Hamlet and Romeo and Juliet. (A review from 1997 lauds: "Soaring over most cast members is Jonathan Crombie's searing portrayal of an enigmatic Romeo.") He was nominated for a Dora Mavor Moore Award for his 1997 performance in Arcadia for Canadian Stage.

Then, Ms. Lambert, Mr. Martin, Mr. McKellar and Greg Morrison developed a show called The Drowsy Chaperone. Mr. Crombie played Gangster 2 in one of the early performances at the Toronto Fringe Festival in 1999 and in later shows as it grew in popularity. In 2007, when Mr. Martin left the show, Mr. Crombie took over the key role of Man in Chair for the show's U.S. tour, including a stint on Broadway.

In recent years, Mr. Crombie kept busy with TV work and theatre shows in Toronto, New York and around the U.S. Most notably, he played C.S. Lewis in Freud's Last Session in Pittsburgh and Hartford (his father and sister Carrie drove down to see him in Pittsburgh), two roles in Benediction in Denver and appeared in an episode of The Good Wife. At the time of his death, he was up for some big theatre roles, was considering doing a one-man live show and was finishing up a documentary with his friend John Mitchell on people who love the flop film Ishtar.

As an actor, Mr. Crombie worked hard and worried harder. Mr. Mitchell recalls his friend fretting over not being prepared, even for the first day of rehearsal. "He was very intellectual about character and analyzing character. But when he acted, it wasn't even apparent how much work he'd put into it." His sister Carrie would often ask him how a particular part was going and he'd always tell her how much more work he needed to do and how he was sure he'd soon be fired. She eventually started calling it "worrying through a part."

Mr. Sullivan recalls one of the moments in the third Anne film when Gilbert returns from the war and tells Anne the only thing that kept him going was thinking about who she was every single day. "I put the words on paper, but I never expected them to have the power they had with Jonathan. It was a five-hankie moment."

According to Ms. Lambert, one of his acting idols was Harvey Korman, a talented character actor who would often take on a smaller role and steal the scene.

Mr. Crombie loved to travel, which he did a lot for work, and despised the idea of being mired in possessions. "He liked to be able to know he could move in a taxicab if he had to. He didn't have a lot of stuff," Carrie says. When he travelled, he often took just a backpack. He thought flying was a waste of money and a hassle, and regularly travelled by bus between Toronto and New York.

In fact, after his death, his family arranged for the donation of his organs in New York and then brought his cremated remains back to Canada by bus, and rode with them. "I can see why he did it," says Carrie of the ride. "Beautiful scenery, no running in and out of airports."

He was a big fan of movies and would often go to films alone or go with Ms. Lambert – and they'd sit apart. Every year, he'd organize an Oscars party, and would win the pool every time because he'd see every movie and would study to nail the technical awards.

Part of the appeal of the Oscars was the game-playing element, and Mr. Crombie loved games. "He'd be that person, in the middle of a party, saying, 'Who wants to play a game?'" Ms. Lambert says. He was big on Scrabble and cards and went out to a regular trivia night in Toronto with his friends.

"He was just the sweetest person," Ms. Lambert says. He was a generous friend who was always a lot of fun. The magic that viewers saw in his portrayal of Gilbert Blythe was part of his everyday personality, too. "He was completely unaware of the wonderful quality that he had about himself," Mr. Sullivan says. "That's what made him so special."

Jonathan Crombie died in New York at the age of 48, after suffering a sudden brain hemorrhage. He leaves his parents and his two sisters. 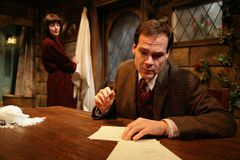