Over the first three episodes, it was plain enough, but brilliantly written – Martin Hart (Woody Harrelson) and Rust Cohle (Matthew McConaughey) track down a serial killer through a grim Louisiana that's lavishly corrupt. The central clash was between Hart's hypocrisy of happily married man exterior, and the devastating cynicism of Cohle. "Everything is a lie" – religion, marriage, order, civility – was Cohle's philosophy. Out there, evil lurked. Hart's noble rejection of this was undermined by the collapse of his own marriage and treatment of his mistress.

Things ended in the third episode with the serial killer possibly in sight. One Reggie Ledoux, prowling a territory that looked post-apocalyptic but is actually the America left behind after the economy and tradition collapsed. What happened last week in episode four not only shifted the momentum of the story, it also pointed toward the meaning of it all. True Detective is an homage to Heart of Darkness, one set in the American South of today. In a way, Hart is Marlow and Cohle is Kurtz.

Episode four included a direct nod to Heart of Darkness. Concocting a dangerous plan to get close to Ledoux, Cohle reverted to his old self, the undercover cop living among bikers and dangerous drug dealers. He strayed into a rave, a scene as barbarian as anything in Joseph Conrad's novella. Eventually Cohle set out on a journey with the bikers, down river on a boat. Even if you have never read Heart of Darkness, but have seen Apocalypse Now, Francis Ford Coppola's modern film treatment of it, you saw the strong visual tip of the hat to it.

The ensuing, astonishing sequence – a raid on a drug house that goes terribly wrong – elevated True Detective from a brooding, slow-moving exploration of character to an epic action drama. Filmed with fabulous sweeping attention to chaos, it was breathtaking. But it was more than that. It was an entry into the literal heart of darkness at the core of the world in which True Detective exists. Bikers posing as cops raid a drug house. Mayhem ensues and a neighbourhood is revealed as populated by brutes. What we have is mass dehumanization, as Marlow found when he travelled into the heart of Africa to find Kurtz. What we have, at last, is an explanation for Cohle's mental disintegration. What we have is an America as feral as what emerges at the end of the river journey in Conrad's story.

I'm not saying the homage explains everything. I'm saying True Detective is as dark as anguish, and we are required to look on its world with utter horror – this place of savages, depraved, overtaken by perversion. Feel free to disagree and discuss.

And then there's The Walking Dead (Sunday, AMC, 9 p.m.), which drew more viewers in the United States than Winter Olympics coverage last Sunday. (Even the chat show about it, Talking Dead, had more than six million viewers.)

What's the draw? Zombie apocalypse, obviously. The drama of survival, too. How would you behave in such a scenario? That's the meat of it. Also, the show has been propelled forward by one devastation after another. On last week's returning episode, it seemed the show's population was reduced to three people: a dad, his son, and a lonely, fierce wandering woman.

But since we've sought major meaning in True Detective, what is there to extrapolate from Walking Dead? Here's a theory – the show is the nightmare of the 1 per cent and the zombies are the 99 per cent. What unfolds in the series is the Koch brothers' horrific vision of the future: They and a tiny band of others will be left at the mercy of the hordes of the feeble, miserable many. After all, there are more of them, always.

At the Olympics: alpine skiing, cross-country, ski jumping, speed skating and hockey. In men's hockey, it's USA versus Russia (Saturday, 7:30 a.m.). On Sunday, it's biathlon, bobsleigh, curling and in men's hockey, Canada versus Finland, at noon. Take your pick. 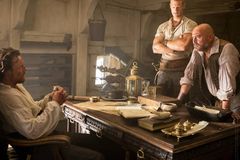 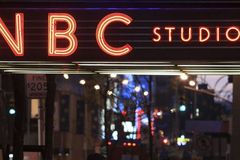 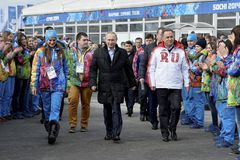