Just when you were chanting to yourself, "Because it's 2017 …" you hear news like this: The Canadian chain Pizza Pizza placed ads on the Fox Broadcasting affiliate in Buffalo, N.Y., last weekend figuring there would be lots of its potential customers watching the American feed of the Super Bowl. On black-and-white sets, perhaps, in a rec room carpeted in orange shag.

The federal government spent a lot of time and political capital in the 1970s and 1980s repatriating Canadian businesses' ad buys in both the magazine and broadcasting industries. Today, it's Google Ads that sucks millions southward and the idea of a Canadian business advertising on a Buffalo TV station seems weirdly old-fashioned.

But Pizza Pizza's move was on the money. It was motivated by the decision of the Canadian Radio-television and Telecommunications Commission to kill CTV's right to simultaneous substitution – that is, replacing the ads on a competing U.S. signal with Canadian ones – during the Super Bowl, so that Canadian viewers who chose to watch Fox could catch all those glitzy American spots. Bell Media has reported that Canadian ratings, on CTV, CTV Two and TSN, dropped about 40 per cent from last year.

The CRTC's 2015 exemption to this one aspect of "sim-sub" clearly isn't fair to CTV, while the goal – to offer Canadian consumers the ability to see American ads during the game – is so minor and so irrelevant to the regulator's mandate to nurture Canadian broadcasting, it's almost laughable. CTV has taken the issue to the Federal Court of Appeal, alongside the NFL because it stands to lose from a cheapening of the broadcast rights it sells to CTV.

But the broadcasting system that the CRTC oversees wasn't actually established to enrich Canadian television consortiums or American producers and rights holders; nor even to get Canadians' cheap and easy access to U.S. content. It was established to get them access to quality Canadian content and the real problem with the Super Bowl fuss is that it distracts from discussions about how Canadian programming is to be funded in the future and how Canadians will find it.

Sim-sub has always been a double-edged sword; it fed ad dollars into the system, in theory providing the broadcasters with more revenue to spend on Canadian programming. But the money was only available if the broadcasters simulcast Hollywood shows with the U.S. networks from which they originated, so in practice it created television schedules that were carbon copies of those crafted in Los Angeles, pushing Canadian offerings to the margins.

Cringing at the spectacle of Canadian television programmers boasting of their ability to pick hot U.S. shows, I used to argue simulcasting was so detrimental to Canadian culture that sim-sub should be dismantled – even if it is a clever way of protecting broadcasters' territorial rights to programs they have purchased.

More recently, I've come to believe it's not worth debating, because as Internet television increasingly allows viewers to sidestep linear television, sim-sub will mainly wither away. (At least for dramatic programming. It might remain a significant source of ad revenue for broadcasters on major international sporting events, such as the Super Bowl, the World Series and Wimbledon, but those are precisely the areas where the CRTC has eliminated it.)

The Super Bowl controversy feels as weirdly retro as a Buffalo ad buy because it's a debate in which Internet service and Internet television do not seem to exist. All those U.S. ads that the CRTC argued Canadians are clamouring to see are readily available online; many of them were released to YouTube with some fanfare in the week before the game.

But, more importantly, if ad revenue from linear television is declining, the big media companies that own Canada's broadcasters – and whose many mergers the CRTC has often blessed – are doing very nicely on the wireless and Internet side of their businesses. When will the CRTC stop pretending that some giant wall separates broadcasting and telecommunications?

People used to refer to the Canadian-content system as a walled garden but, sometimes, it feels like it's the Internet that is walled off these days, still protected for any kind of regulation or levy by a "new media" exception the CRTC enacted all the way back in 1999.

Any change in direction here could only occur after CRTC chairman Jean-Pierre Blais, who has positioned himself as a consumer champion, finishes his term in June.

After that, a big question surrounds Minister of Canadian Heritage Melanie Joly's long-awaited review of cultural policy: How much fortitude will the government show for challenging those who profit from new-media distribution – which means everyone from Bell and Rogers to Google and Netflix – to make contributions to Canadian-content creation, rather than simply replacing television's lost ad revenue with more government funding?

Linear television is not dead by any means; this winter, high-quality Canadian programming has been enjoying a continued renaissance: On the same night in January, Global's premiere of Mary Kills People drew more than a million viewers while CTV's Cardinal drew almost 1.4 million for its debut.

But television now exists alongside the Internet and pretending the two aren't joined at the hip seems retro to say the least. 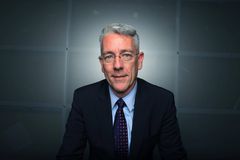