So much for Father's Day in Westeros.

HBO's epic medieval-fantasy series Game of Thrones wrapped up its fourth season on Sunday night with a startling finale that included the unthinkable act of patricide, along with several other story shockers clearly designed to hold fans until the fifth season's arrival some time next year.

It's unknown whether last night's GOT season finale, written by show-runners David Benioff and D.B. Weiss (spinning off George R.R. Martin's source material, of course) was actually scheduled to broadcast on Father's Day, but the timing worked out eerily in the show's favour.

And please take note: This recap contains significant plot details from Sunday night's Game of Thrones. If you haven't watched the episode yet, all spoiler alerts apply from this point onward.

The finale began exactly where the previous week's episode left off, with Jon Snow (Kit Harington) purposefully trudging through the woods towards his goal of confronting Mance Rayder (Ciaran Hinds).

After Jon finally makes it to Mance's tent, the two men hoist a respectful toast to the dead – including Grenn (Mark Stanley), Ygritte (Rose Leslie) and Mag the Mighty (Neil Fingleton) – and Mance actually proposes a truce.

Why the sudden rapprochement? Mance's people must get over the imposing Wall. Winter is coming – and so are the White Walkers.

At which point a battle horn was sounded and the battle-fresh army of Stannis Baratheon (Stephen Dillane) stormed the encampment. Mance's army of free men is exhausted and barely puts up a fight. Upon the recommendation of Jon, Stannis and Davos (Liam Cunningham) spare Mance's life. For the time being.

Soon after, at Castle Black, Jon and the men of the Night's Watch burn their dead to prevent them from returning as zombies. Jon takes Ygritte out into the forest to burn her body in the "real north."

Also in the north, Bran (Isaac Hempstead-Wright) and his smallish coterie arrive at the mystical hideout of Jojen Reed (Thomas Sangster). The group are attacked by reanimated zombies, resulting in Jojen's death, but a "child of the forest" saves Bran, Hodor (Kristian Nairn) and Meera (Ellie Kendrick).

In a cave beneath the gnarled roots of a tree, the trio meet the prophetic Three-Eyed Raven (Struan Rodger) that has long haunted Bran's dreams. The Raven says he can't make Bran's useless legs work again, but he can teach him to fly.

Cut to: Down south near the Eyrie, where Brienne (Gwendoline Christie) and Podrick (Daniel Portman) happen upon a pair of weary travellers. Why, it's the Hound (Rory McCann) and Arya (Maisie Williams)

Brienne, aka the Lady of Tarth, tries to convince Arya to abandon the Hound and come with her and Pod for safety reasons. Hound counters that there is no safe in Westeros anymore.

The difference of opinion naturally prompts a bloody fight between Brienne and Hound that ends with the former bashed and bloodied and pleading for a quick and merciful death. The Hound does not get his wish.

Meanwhile, back in King's Landing, Cersei (Lena Headey) conscripts one of her black-magic practitioners to work their magic on the dying Ser Gregor Clegane (Hafpor Julius Bjornsson). The magic man says he can fix "The Mountain," but he will be changed. And probably not for the better.

Cersei also sets the scene for next season by approaching Tywin Lannister (Charles Dance), the current de facto ruler of Westeros, and arguing against her arranged marriage to Loras (Finn Jones). Tywin is nonplussed by her efforts.

And what of the winsome Daenerys (Emilia Clarke)? Across the Narrow Sea in Mereen, she's finally realizing that she's incapable of controlling her deadly dragons. Daenerys is shown luring two of the smaller fire-breathers into a catacomb and fastening chains around their necks.

But what of the grim nod to Father's Day? As should be expected, Tyrion (Peter Dinklage) was responsible.

For most of the past Thrones season, the fearsome, diminutive warrior has been on trial for his life after he was falsely accused of murdering his own nephew, King Joffrey (Jack Gleeson).

Tyrion snuck into the Tower of the Hand, where he found Shae (Sibel Kekilli) lying in his father Tywin's bed. Without hesitation, Tyrion strangles Shae with her own golden chain (though he whispers "I'm sorry" as he does it). And then Tyrion picks up a crossbow.

In the next moment, Tyrion surprises Tywin, who happens to be sitting on the toilet, and ignoring the old man's protestations, shoots him with the crossbow. Twice, in fact.

A winery fit for Game of Thrones: The Thompson-Shuswap vintners
April 25, 2014 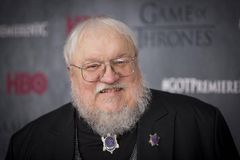 Now Trending: How ratings for Game of Thrones premiere compared to Sopranos finale for HBO
April 8, 2014 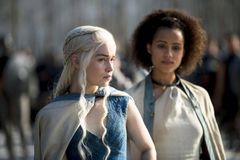 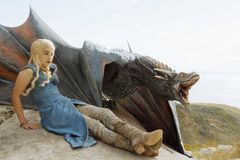