Some children read The Secret Garden and love it for the idea of a private retreat. For others, like me, the classic about a little white girl born in India is their first encounter with colonialism. What about little brown girls born in India – or elsewhere? Where were the stories about us?

I felt the same disconnect after the April debut of HBO's now Emmy-nominated Girls. The show led to a collective Internet spewing over its varying degrees of myopia; loudest were those who felt let down by the lack of diversity. Created by and starring 26-year-old Lena Dunham, the show delineates the lives of four smart but cellulite-y, moneyed but struggling twentysomething white women in New York. In a post for popular blog The Hairpin, New York Times reporter Jenna Wortham confessed that loving the show worsened its presumed universality. "They are us but they are not us. They are me but they are not me," she wrote.

The criticism of Girls missed the fact that alternative options for racially diverse, women-centric content are out there – online, onstage, even on cable TV.

Fox's forthcoming sitcom The Mindy Project, written by and starring The Office writer Mindy Kaling, could be read as a sly antidote to Girls. In the opening scene, the camera pans across Mindy's mom in a sari on the couch, before focusing on the kid version of her reciting lines from a Meg Ryan romcom. It's yet another show about a successful, desperately single woman, only this time she's a dark-skinned, wide-hipped doctor instead of a waifish blonde caterer – or whatever.

But a more satisfying antidote is J, the bumbling, misanthropic lead on The Misadventures of Awkward Black Girl – a popular, YouTube-based web show. Played by series creator Issa Rae, J is a black nerd: She has a shaved head, can't dance, loves rap, wears frumpy separates to a mundane office job, and is clueless about men. ("What do white people listen to when they have sex? What would '90s Nia Long do?" J muses, while mustering the nerve to seduce a new white boyfriend.)

Most important, it does a good job at normalizing: J isn't a caricature of a black girl (hence "awkward" instead of sexy or sassy) and Rae isn't afraid to bust those stereotypes – the secretly nasty church lady, the Urkel-esque nerd – which can be entrenched in mainstream black entertainment.

Now in its second season, Awkward Black Girl was recently described in a glowing review by The New York Times as "full of sharp, pointillist humor that's extremely refreshing." The show is affiliated with IAmOther.com, a web channel run by influential music producer and avowed black nerd Pharrell Williams.

The distinctive humour of Awkward Black Girl is echoed in the work of Toronto's Liza Paul and Bahia Watson, the actor/writers behind the Fringe Festival play Pomme is French for Apple. The show invokes the dialects, societal nuances and sexual stigmas of the West Indies and its diaspora, with Watson and Paul assuming a range of personas, from oral-phobic church lady to clueless, fellatio-obsessed dude.

Pomme is sex-positive and queer-friendly without being polarizing or, worse, pedantic. (There is a Ryan Gosling scene.) Confronting the idea that across cultures and ages, the vagina endures as an object of fear and control, it manages to be disorientingly funny. The braveness of the humour is evident in the playwrights' online rap spoof about menstruation called I Flow Heavy.

Will The Mindy Project step up to that level of self-awareness? There's a scene in the first episode where Mindy fields a potential patient who's nine months pregnant and Muslim, afterward reprimanding her receptionist with the line, "This office isn't an inflatable raft." Like Dunham's Hannah Horvath, maybe Mindy (character and writer) can't see beyond herself. Anyone can be myopic, after all.

What I learned from watching Girls (and its sex scenes) with my daughter
June 23, 2012 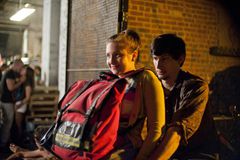 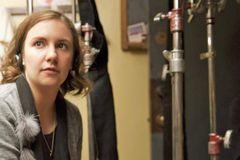