The morally bankrupt villains on Netflix's House of Cards will stop at nothing to satisfy their lust for power. In the first hour of Season 2, which began streaming yesterday, Robin Wright's character, the wife of a corrupt U.S. politician, tells a pregnant woman who's suing her, "I'm willing to let your child wither and die inside you if that's required." While such rank evil can be fun to watch, it leaves us hungering for a character who is more ambiguous, who makes us guess whether she has moral lines, and if or when she'll cross them. Enter Jacqueline Sharp, played by Canadian actress Molly Parker.

At 41, Parker has made a career out of compelling ambiguity. Her characters tend to drift over the screen like insinuating smoke. She smiles with her eyes or her mouth, but rarely both at the same time. Her face can shift from plain to dazzling with the slightest calibration; her body, though the opposite of pneumatic, is drop-dead sexy. She knows how to keep still, to make you come to her.

But you never know what you're going to find there. She possesses the classic, delicious screen mystery that comes from withholding parts of herself. That requires confidence, because some viewers might not want to work that hard.

But it's perfect for House of Cards, a show that prefers its menace to speak in a silky whisper rather than a shout. Though Netflix doesn't release viewer numbers, House of Cards – which also stars Kevin Spacey as cutthroat U.S. Congressman Francis Underwood, who slips into the role of vice-president in the new season – detonated a bomb in the TV game last year when its 13 one-hour episodes premiered all at once. Suddenly, everyone was binge watching, real-life politicos were lining up to have their photos taken with the show's stars, and Emmy Award rules were being revised to accommodate the new delivery system. (Wright won a Golden Globe last month.) Along with the similarly themed Ides of March, Veep and Scandal, House of Cards tapped into a burgeoning appetite for entertainment that exposes the trials and titillations of behind-the-scenes power playing.

"The show seems to me to be Shakespearean, really," Parker said in a phone interview last week. "It's essentially Richard III, with a little bit of Macbeth thrown in. Those are stories that play out in the halls of power, and Washington is where that exists today."

I ask if she's as amused as I am by real Washingtonians who seem delighted to hobnob with the show's stars, no matter how negatively the series portrays them. "I haven't had any conversations with politicians about the show, but people like to perceive themselves as being powerful," Parker says, with an audible smile. "So it makes sense to me."

Parker's character is a politico to reckon with. (Don't you love the show's literal character names – Underwood? Sharp?) She's a third-term congresswoman, so she's not brand new to politics. But she's been in Washington less than a decade, so she's neither jaded nor stale. She came out of military intelligence, after serving her country in the Iraq war, and has powerful mentors that she may or may not be willing to betray. As Underwood's choice to succeed him as House majority whip, she's getting scheming lessons from the master. Yet, as she reveals to her own mustache-twirling female executive assistant, she knows something about that subject already. And as the season unspools, "she has some secrets that come into play," Parker says. In other words, she's just what the script doctor ordered.

"I've always been interested in playing complex characters," Parker goes on. "They don't have to be anything except complicated, for me to be interested."

She grew up on a farm in British Columbia (not, as has been widely misreported, a commune), which contributed to both her strength and her sense of separateness. "My parents were young hippies in the early seventies, and our farm had a garden, goats, chickens," Parker says. "I had a pretty fantastic upbringing, and really strong, smart parents, who were incredibly loving and supportive of me."

She spent the first part of her career where complex characters then thrived: in independent films, the very titles of which – Kissed, Bliss, and Pure; Wonderland, The Center of the World and Marion Bridge – sound exotic, like celebrity fragrances, or liqueurs. As independent film has ebbed out to the edges of the movie business, and those rich roles have moved onto television, so has Parker. She signed onto a few series that didn't work on network TV – Swingtown, about spouse swappers in the 1970s; Shattered, about a detective with dissociative identity disorder; The Firm, based on the John Grisham novel – but found that cable better suits her, or she it. She was a seductive rabbi on Six Feet Under, an elegantly steely frontier widow on Deadwood, and co-starred with Hilary Swank in the telefilm Iron Jawed Angels. She even appears in a photo as the late wife of Nucky (Steve Buscemi) on Boardwalk Empire.

Parker first met her House of Cards costars at the initial table reading for Season 2. "Robin Wright welcomed me, and said she was glad there were more strong women on the show," Parker says. "But it revealed itself slowly, how important a role I would have." About working with Spacey, she says, "You really have to bring your A game. He's such a powerful actor. He likes the work."

To keep up, Parker studied the American political system, and how its legislation is made. She also read autobiographies of powerful women, including Hillary Clinton, Condoleezza Rice and Nancy Pelosi. "I was really curious about what it costs women to ascend in leadership," Parker says. "We live in a time when 51 per cent of college graduates are women, but only 12 or 13 per cent of the top political and business jobs are held by women."

She discovered that "these women are incredibly passionate about what they do. They work really hard. Nancy Pelosi commutes every week from San Francisco, where her husband and family live, to D.C., and has done for years and years. That's huge. And she flies coach." Parker laughs. "I think the work is difficult, and there's a big cost."

Parker imbues her character with that knowledge, and she makes it shine through, no matter how badly Sharp behaves. "Because she's come up through the military, a patriarchal system," Parker says, "she understands what it takes to be taken seriously by a roomful of men."

Parker doesn't need to add that she does, too. More power to her.

As House of Cards’ second season premieres, cast revels in Obama’s support
May 11, 2018 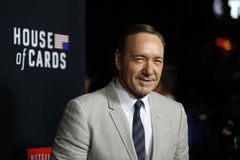