When I was a young fella, my pals and I were deeply impressed by Alfred Hitchcock's The Birds. Hitchcock's Marnie, not so much. Whatever the heck was going on was unclear to us. The title character's distrust of men and the talk of her "frigidity" were meaningless. The thing just wasn't scary enough for us.

There was one TV channel that aired these Hitchcock movies; it also aired Alfred Hitchcock Presents. The anthology series of zany and scary stories was at our level of understanding. The actress who starred in both The Birds and Marnie made no impression on us. If we had thoughts about such matters at all, that siren Raquel Welch was the babe du jour.

People older and smarter than us had, of course, long been fixated on Hitchcock's worship of icy blondes in his movies. Grace Kelly, Kim Novak, Vera Miles. You didn't need to be a film scholar to notice. Hitchcock had been interviewed by François Truffaut in 1967 about the icy-blonde obsession. He said, "You know why I favour sophisticated blondes in my films? We're after the drawing-room type, the real ladies, who become whores once they're in the bedroom." And Truffaut said, "What intrigues you is the paradox between the inner fire and the cool surface," to which Hitchcock replied, "Definitely." The inner fires of ladies were unknown to us and we were the better for it.

The Girl (Saturday, HBO Canada, 9 p.m.) is about Hitchcock's obsession with Tippi Hedren (Sienna Miller) during the making of The Birds (1963) and Marnie (1964). And it is far more creepy than most of Hitchcock's work. That's not to say it's a good movie (it's a BBC/HBO production) but it is disturbing in a crude manner.

Based on the book Spellbound by Beauty by Donald Spoto, the film stars Toby Jones as Hitchcock. We meet him when his wife Alma (Imelda Staunton) spots Hedren in a TV commercial and immediately recommends her to her husband, knowing he's looking for another cool, icy blonde for The Birds.

Thus begins Hitchcock's languid seduction of Hedren, which at first really only amounts to his promise, "I'm going to make you a star." Lurking under the roly-poly director's control of the movie and the actress there is, of course, a far more tawdry interest. Self-pitying and self-aggrandizing, Hitchcock wants sex with her.

What unfolds is a tacky game of manipulation. We become aware that Hitchcock felt he could seduce Hedren because he had her under contract and, unlike the other actresses he had directed and obsessed over, Hedren was an unknown and therefore more vulnerable. Miller as Hedren is good but not great. She doesn't have the iciness that Hedren had in her youth and she struggles to convey Hedren's enormous strength of character as a woman unwilling to let Hitchcock have his way.

Another problem is that Jones seems to be imitating Hitchcock rather than inhabiting the role. When he's called upon to suggest Hitchcock's depression and bouts of ugly harassment of Hedren, the viewer can only find it icky but implausible. Thing is, Hedren's career was made and then ruined by Hitchcock, and that's fully plausible. What we get here is an observational story of harassment, one that muffles the dynamic between the director and actor.

What this movie doesn't lack is scenes of terror. The centrepiece is the filming of scenes from The Birds. Here, Hitchcock promises Hedren that fake birds will be used in the attic scene where she is viciously attacked. Then he sits and watches days of filming as real birds are unleashed on Hedren over and over. The viewer begins to smell the whiff of disgust, as a predator takes revenge for being rebuffed. And yet, nothing is resolved or illuminated.

Hitchcock lusted after Hedren and then hated her. That's it. The inner fire of both people is left unknown to us. The viewer recoils from Hitchcock; the sense of being in the presence of a sicko is strong, if that's what you can stomach.

W5 (Saturday, CTV, 7 p.m.) has two stories reported by Lloyd Robertson. First, he marks the 50th anniversary of the Cuban missile crisis by going to Havana to talk to confidants of Fidel Castro about the mood, tension and machinations in Cuba as a nuclear war was threatened because of Soviet nuclear missiles under construction on Cuban soil. Also he to talks to Sergei Khrushchev (son of the chairman of the Soviet Union, Nikita Khrushchev), who had a child's view of the crisis. It's a fascinating look at what has been conveniently forgotten about that time. In the second story, Robertson profiles Antoni Cimolino, the new artistic director of the Stratford Shakespeare Festival. Much is made of Stratford being Robertson's home town. And quite right, too. 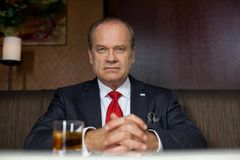 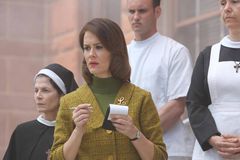 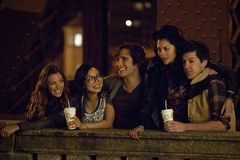