Today's parent suddenly has a new concern: What's the earliest age for a child to star in his or her own reality-TV show? The bar has now been lowered.

Or at least the age has dropped for parents in some economically disadvantaged regions of the U.S. The reality genre moves both backward and forward in the new TLC series Here Comes Honey Boo Boo, which shines a spotlight on six-year-old Alana Thompson, a.k.a. Honey Boo Boo. Like it or not, the kid is ready for her closeup.

Over five seasons, regular viewers of T&T have been exposed to pre-show meltdowns, rabid stage mothers and at least one five-year-old contestant dressed as a hooker while shimmying to LMFAO's Sexy and I Know It. Honey Boo Boo, however, is responsible for giving the show a global profile.

For a few days earlier this year, Toddlers & Tiaras went viral with clips from an episode showing Honey Boo Boo swigging "Go Go Juice" from a bottle provided by her mother, June.

Viewers were left to guess the contents of the mixture, but it sure charged up Honey Boo Boo, who was shown running around backstage like a dervish. Talking straight into the camera, the precocious first-grader claimed she competed for the money, declaring, "A dollar makes me holla," in her Southern drawl.

Public curiosity about Honey Boo Boo was sustained by a follow-up interview on Good Morning America, in which Honey Boo Boo's mother revealed that the bottle contained a blend of Red Bull and Mountain Dew, and was not the tiniest bit apologetic about letting her daughter ingest the mixture.

"Performing and getting a kid up that early and lasting all day without a rest, you have to energize that body," she told the interviewer. "There are far worse things. I could be giving her alcohol."

When the Honey Boo Boo episode aired last January, it was the highest-rated episode in the series among female viewers aged 18-49. The inevitable spinoff was approved, filmed and packaged in less than three months. The working idea is that if viewers loved Honey Boo Boo – described by one critic as "the lil' Miss Sunshine we all deserve"– they're gonna love her redneck family.

Filmed in the dreary rural burg of McIntyre, Ga., where their rundown home sits right beside the railroad tracks, the pilot introduced viewers to the most déclassé clan since The Beverly Hillbillies.

Taking a page from MTV's Teen Mom, the pilot confirmed that Anna, 17, is very much pregnant. The whole clan tags along for her ultrasound appointment, and danged if Honey Boo Boo doesn't convince the technician to scope her own tummy to see if the chicken nuggets she had for lunch are still in there.

In the spirit of TLC's Extreme Couponing, Mama June spends a great deal of time hunting down bargains. The family has enough toilet paper stockpiled to last them to the next millennium.

But everybody has big dreams. What fuels Honey Boo Boo's dreams of winning pageants – where the prize money normally tops out at a $1,000 U.S. – and seemingly bonds her family, is that good ol' hillbilly pride. It's permissible to pass judgment on Honey Boo Boo's parents for bad parenting, but the show seemingly exists to showcase, if not celebrate, the family's obvious poverty.

The opening episode highlight was the entire family heading out to the Redneck Games – yes, it's a real event – which includes a mudhole belly flop competition, bobbing for pigs feet and a bikini contest. For the Thompson family, it's the highlight of the calendar year.

"It's all about Southern pride…like the Olympics," explains Mama June. "But with a lot of missing teeth and a lot of butt crack showing."

And in this confined reality-TV world, a small child shall still lead them. At the Redneck Games, little Honey Boo Boo, bless her heart, has never looked happier than when she's splashing in the mud with her sisters. It ain't beauty pageant glamour, but it's real. 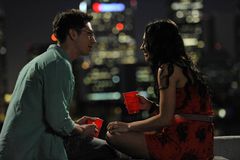