Consumed as we are by the local news and the latest about NAFTA or Trump, some conflicts fall off the radar. Few are talking now about Iraq and the retaking of areas once held by the Islamic State. It unfolds, it's over there, and best not to think about it is the gist.

Frontline: Mosul (Wednesday, PBS, 10 p.m.) is a stunner of a new documentary about the brutal battle to extricate IS from Mosul, Iraq's second-largest city, and reclaim the area. In October of 2016, French cameraman Olivier Sarbil began filming an Iraqi Special Forces campaign to reclaim Mosul, concentrating on a handful of the soldiers. The result is a heart-pounding, intimate, you-are-there account of the siege. The program has already won numerous awards and is considered a contender for an Academy Award for best short documentary.

What Sarbil achieves is at once hushed, scary and raw. It opens with these words whispered, "There's an ISIS fighter here. On the other side of the wall. Don't make a sound." Sarbil is moving through Mosul, street by street, house by house, with a small group of Iraqi Special Forces and the viewer gets to know them intimately.

There is Anmar, who is seeking to avenge the death of his father, who was killed in a suicide attack. "A fire lit inside me to kill these terrorists," he says.

Amjad, the youngest, is immensely and irrationally cheerful to be fighting on the front lines.

Hussein, a skilled sniper and soccer fanatic, is enraged that his chance at a being a soccer player was ruined by the chaos caused when IS took large swathes of Iraq. "I feel good when I kill them," he says with a shrug. "It's like a wedding party!"

And then there is Jamal, a sergeant, who hides always behind a constant stream of jokes and wisecracks. That's his armour.

These soldiers might seem to be stereotypes of men at war, plucked from a movie. But they are heartbreakingly real. In the danger and chaos of the situation these men do not have the time to pose or posture for Sarbil's camera. It just gazes at them as the bullets fly and they try to process what they are seeing and experiencing.

More than one million citizens lived in Mosul when IS took over. The city, as the documentary shows, is now a shambles of bombed-out buildings and booby-trapped cars are everywhere. IS suicide bombers, mostly young teenage boys, are sent out to hide among the civilians fleeing the city. The final words of these boys are broadcast on IS radio and the soldiers listen closely, stone-faced.

Some civilians fear the Iraqi Special Forces as much as they fear IS fighters. We see a woman, her entire body shaking constantly, as she lets the soldiers into her house. She and her family are so traumatized they don't know who to trust or where to run.

The soldiers are the core of the doc and also a mess of jangling nerves. Sometimes they're made delirious by the stress and danger, and their constant laughing and joking becomes sinister. Then we see them call their wives at the dawn of each day, often whispering "Good morning, darling" into the phone and asking for news of family or friends. The reaching for normalcy is heartbreaking.

The intense, visceral footage of the fighting is bracing enough but the insight into the soldiers can be heart-scalding. As the siege goes on they become frustrated and pessimistic. The retaking of the city is a brutishly slow process. The enemy is phantom-like but deadly and there are hundreds of thousands of civilians still trapped there.

One of the four is, eventually, shot dead in the fighting. The others find it hard to comprehend and hard to carry on. Jamal says, "When everyone is sleeping and I'm awake, I break down and cry. People are like leaves on a tree. When they dry out, they fall to the ground. Everyone has their destiny. We all have our day." And yet he cannot reconcile what he's seen with this philosophy.

It's not easy viewing, but it's highly recommended, this singular, searing look at a few soldiers fighting one urban battle that has such large consequences.

With that I leave you for a few days and am away to Ireland. Be extra-nice to each other. 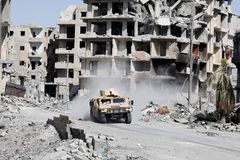 Globe editorial: After IS is defeated, what comes next?
July 18, 2017
John Doyle: Disjointed’s high humour merely burns out
August 30, 2017 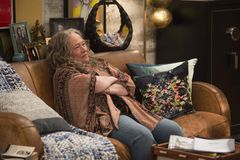