Who can turn the world on with her smile? Who can take a nothing day and suddenly make it all seem worthwhile?

Jenna Talackova hopes she's the 21st-century's answer to those questions – questions first and famously posed last century in the theme song at the start of the now-legendary Mary Tyler Moore Show. Moore's character, you may recall, was ditching a failed relationship and small-town blues for life as a single woman in the big city of Minneapolis. In Talackova's case, it's her hometown of Vancouver that's being thrown over for a fresh start in Toronto – the boyfriend of three years exited the scene about six months ago – and it's all going to be documented in a recently announced new E! Canada reality-TV series. Tentatively titled Brave New Girl, its planned eight half-hour episodes are set to air in early September, with shooting starting next week.

"I believe everything happens for a reason," an excited Talackova said on the phone Wednesday from her apartment in Vancouver. "A lot of my friends and people who meet me [have thought] I should have a show because I'm so funny. I think if there's one thing I'm good at it's definitely being funny. I just hope people fall in love with my comedy and, like, my personality and really enjoy the show."

Certainly Brave New Girl is going to draw an audience, but perhaps not initially for its promise of humour. There's an entendre to that title, you see. Single or double, who knows? Twenty-four years ago, Jenna Talackova was born Walter Talackova. But thanks to hormone treatments at 14 and sex reassignment surgery in 2010, he is now a leggy, curvaceous she – the most famous transgendered person in Canada, maybe even the world. Certainly Talackova made headlines around the world last spring when Donald Trump ejected her from the finals of the Miss Universe Canada contest (he owns the Miss Universe pageant) because she was not born female, only to reverse his position days later in the face of global outrage.

Of course, television came calling in the wake of the controversy promising fame and fortune. But some of the concepts were, in the words of Carrie Mudd, "pretty horrific." It's Mudd's Toronto-based company, Peacock Alley Entertainment, that's producing Brave New Girl after Mudd flew to Vancouver last August to meet with Talackova and ink a deal. One rejected concept from the United States would have put Talackova in "a Bachelor-style reality show where in, oh, Episode 6, she'd reveal [to her suitors] that she used to have a penis." Such a scenario "would make her very much a flash in the pan," notes Mudd, whereas Peacock was keen to "help build her brand and really help her chase her dreams. I think that's why, in the end, we decided to work together."

Those dreams are, as might be expected, of the entertainment variety, which is why Talackova has been spending the last several months taking piano, voice, public-speaking and dance lessons. The move to Toronto isn't just a reality-TV gambit but "a personal-growth thing," says Mudd. "She wants a change,

and Toronto, with its proximity to New York, seems to be the place where she at least wants

to start the journey. I don't doubt that she'll live in 15 cities in the next 10 years." Or as Talackova herself put it: "I think it's more a chapter in my life where I want to play with my career more so than being in, like, a relationship . ... I put too much time in relationships, too much energy."

Shooting of Brave New Girl will run into August. As in The Mary Tyler Moore Show, Talackova will be living alone in an apartment in Toronto ("I hate living with people – well, I don't hate living with people – but I like having my own space"), but much of her time will be taken up having adventures with friends like Miss Universe Canada 2010 Elena Semikina and Dajana Radovanovic, another Miss Universe Canada contestant from 2012. Who will be Rhoda and who will be Phyllis? We'll see in September.

Rachel Goldstein-Couto, E!'s director, specialty programming, acknowledges that Talackova's transsexuality will be a lure to some viewers but that wasn't what galvanized E!. "We just thought telling a docu-soap story of Jenna would be interesting, just on how sort of a normal girl she is, just a normal girl who just wants to be famous, with this amazing backstory." Goldstein-Couto doesn't expect flak from E! viewers, not least because, in the main, they "are really sophisticated," and Brave New Girl fits in with programs they're already at ease with – stories of "big glamorous lives that have that idea of heart and family at the base of them," such as Giuliana and Bill and Ice Loves Coco.

Meanwhile, Talackova is trying to stay as focused and calm as circumstances allow. Yoga's a help and so, it seems, is the fact she's "a huge spiritual junkie. I take Buddhist classes Thursday nights. I pray, like, every day before I go to bed, like, for the last 10 years. I believe in energy and I believe there's beauty in every religion – but I really love Buddhist spiritual scriptures and their way of life."

Canadian transgender model to star in her own reality series
May 6, 2013 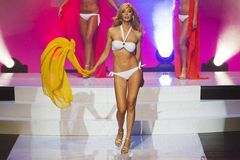