Here's how it works – there are three TV models. There's network TV, which anyone can access and which relies on ads to make to money. There's basic cable (channels such as FX, which delivers Justified and Sons of Anarchy), to which you subscribe, but also has ads. And then there's premium cable (HBO), which has no ads but requires customers to pay a more substantial fee to see its content.

And now there's Netflix, which has previously operated only as a library, allowing TV viewers access to movies and shows made by broadcasters and studios. This year, Netflix is getting into the original-content business. It's producing dramas and comedies you can watch, at any time, without ads, as long as you're a paid-up Netflix subscriber.

The new importance of Netflix is underlined by its presence this year at the Television Critics Association press tour, where new network and cable shows are presented and promoted to critics. Netflix took just a two-hour slot in a two-week tour, but got tons of attention.

"We're leading the next great wave of change in the medium of TV," Ted Sarandos, Netflix's head of content, told the TV critics this week. "We're not trying to destroy it, but evolve it for the current generation and those to come."

What that means, in mundane TV terms, is that Netflix will roll out its first batch of original series, movies and miniseries between February and May. It has made a new season of the old Fox series Arrested Development, a cult hit. It has a political drama, House of Cards, starring Kevin Spacey and Robin Wright, and directed by David Fincher. And its offerings also include the supernatural thriller series Hemlock Grove and a new Ricky Gervais vehicle called Derek.

From the teasers and trailers available, all look slick. Mind you, it's impossible to tell if they are of any true quality. But Netflix, with its deep pockets – money accrued from subscribers who want to see movies and old episodes of TV shows – says it knows what it is doing. It studies what subscribers pay to watch.

It's rather like the library getting into the book-publishing business because it can tell what people like to read. Great idea, but fraught because the public's taste is fickle and the public is so easily distracted.And the fact that some major talent has signed up for Netflix projects is no guarantee of quality and major-impact product. Wave money around in Hollywood and everyone with an idea will come to you.

Those from the traditional TV industry point out that there is no measurement for success with the Netflix content – no ratings. Nobody here can tell if something is a hit if there is no report-card data on who watched and when they watched. And what sort of viewer they are – age group, income and location.

The day before the Netflix newbies came here, FX president John Landgraf was dismissive about the Netflix threat. He said a Nielsen ratings report "keeps you honest" because you can't fool anybody into thinking a show succeeds with viewers, and Netflix avoids the Nielsen ratings. Netflix's Sarandos wasn't impressed. "We're going to measure a show's success on multiple metrics," he said. "But one of them will not be time-slot viewing. It's not our business to attract people at certain times so I can sell them Ford trucks. What John Landgraf is talking about is fine, but that's not our business."

Thing is, both are correct. While Netflix is the alluring, shiny new thing in the TV racket, it's no saviour of original, well-made drama and comedy; it's not a new dawn in television. As a business, it needs original content to keep its customer base. It has no access to premium, talked-About TV series or movies made by HBO or Showtime. You can't see HBO's Girls on Netflix, and if everybody is buzzing about Girls, Netflix is losing out. Netflix hopes desperately that you'll be talking about House of Cards and Hemlock Grove.

Right now, Netflix is making many people in Hollywood very happy – show creators, actors and directors. "These guys at Netflix are really experimental, fresh thinkers," said Mitch Hurwitz, the creator of Arrested Development. "In an early meeting I had with Ted, they said they were going to put a Netflix button on remote controls. And I said, 'Why didn't NBC put a Peacock on remotes?' It's just because NBC predated the remote control. Netflix comes in and looks at it all fresh. You've got to follow the audience, and we're just embracing it."

That's great, but a cult comedy being revived isn't a revolution.

The ratings issue rankled Sarandos, though. "I don't know why HBO, Showtime – any of them – publish ratings," he said. "It might be for internal reasons, or to manage the relationships with cable operators, but we don't have relationships with cable operators to manage. There's no business reason for us to publish ratings other than to create artificial pressure on a show to perform on a short time frame. We don't need to add that to the mix. There's enough pressure in creating television as it is."

True and that's not the half of it. The online service Hulu has original content. Amazon and Google are getting into the game. No network or cable channel is unaware of the competition, and all are striving to make better shows to keep viewers. Traditional TV is not dead, dying or desperate. Cable challenged network TV, and now Netflix challenges everybody. Until everybody sees the Netflix content and either shrugs or cheers, there's nothing to be afraid of.

The 70th Annual Golden Globe Awards (Sunday, NBC, CTV, 8 p.m.) lacks Ricky Gervais but has Tina Fey and Parks and Recreation's Amy Poehler as co-hosts. Expect lots of jokes about Les Misérables, but not much bite directed toward the giddy stars , or the nominated movies and TV series. The red-carpet coverage starts on E! Canada at 6 p.m., and kicks off on NBC at 7 p.m.

Girls (Sunday, HBO Canada, 9 p.m.) is back, as the whole world knows. On the evidence of the first two episodes, this is a meaner, more melancholy group of characters. They are harder to like, these young women, but still shockingly real. Will Internet TV change the way we watch television?
November 2, 2010 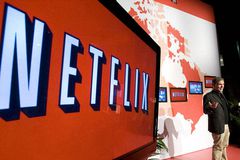