When I travel this great land of ours, in search of insight, common sense and sometimes in search of the Brother when he goes dipsy-doodling, people I meet tend to tell me what they watch on TV. When they meet the Brother they tend to tell him to quit bothering them or stop smiling in that geeky way at their sister. But that's another story.

In recent years a lot of people have told me how much they enjoy Murdoch Mysteries (CBC, 9 p.m.). For a time, the remarks tended to be about the mysterious disappearance of the show from the CITY-TV schedule and the even deeper mystery of when it might return. Now the show is a CBC property, airs every Monday and boy, is it going strong. What's the continuing allure? Let's investigate.

Tonight's episode – we're now at season six, episode seven – is called The Ghost of Queen's Park, and apparently originated from an idea by the Lieutenant-Governor of Ontario, David C. Onley, who also makes a brief appearance. The setting for much of the action is Queen's Park, the Ontario Legislature which, when it isn't prorogued, usually features MPPs droning on and on about cancelled gas plants in Oakville and Mississauga and provincial Conservative leader Tim Hudak demanding an election today, tomorrow or at the very latest, Friday evening.

As things open tonight it's quiet at Queen's Park. There's an elderly chap there, at night, doing paperwork. He hears a noise. A night watchman hears something too. Elderly chap thinks it's the night watchman. Night watchman thinks it's the elderly chap. Next thing you know, the elderly chap is dead and the watchman is making speeches to the police about "the ghosts of Queen's Park. Lady ghosts, one and all." This turn of events impresses the officer taking statements at the scene, the charming naif Constable George Crabtree (Jonny Harris). He takes the view that the dead man, the MPP for Toronto East, was poleaxed by a ghost. Our hero, the cool, sensible Detective Murdoch (Yannick Bisson) is less sure.

He puts the ghost theory to his boss, the eternally dyspeptic Inspector Thomas Brackenreid (Thomas Craig), who scoffs and declares, "I always thought Queen's Park was full of happy dafties!" To which Murdoch replies: "Happy dafties?" And Brackenreid clarifies by barking, "Crackpots!"

Along comes a journalist, who says he has the dirt on the dead MPP. Land dealings and such. Numbered companies. Murdoch Mysteries might be set at the end of the 19th century, but some things obviously never change.

Anyway. It is asserted that Queen's Park is crawling with ghosties, including "a maiden in a checkered dress who pulls it up over her head to conceal her face." Crabtree interviews the typists at Queen's Park, one of whom asserts that the night watchman "isn't quite the full tin of biscuits."

Stuff happens. A senior figure in the Ontario government is questioned by Murdoch and Brackenreid about the death. He sees this as impertinence – "Do you know who I am?," he asks rhetorically. "I'll have your badges!" And Murdoch and Brackenreid manage to keep a straight face while resisting the temptation to reply, "Badges? We don't need no stinking badges!"

Crabtree won't let go of the ghost theory and corrals the comely Dr. Emily Grace (Georgina Reilly) into helping him. As it happens, even though Crabtree is oblivious, Emily is as flirty as all get out. When she says she has enjoyed "metaphysical excursions to the other side," you get the feeling she's talking about you-know-what. Nudge, nudge. Or maybe she isn't. Anyhoo – her and Crabtree. Mark my words.

There is also a situation involving Murdoch and Dr. Julia Ogden (Hélène Joy) which is fraught with meaning but I failed to grasp because I haven't seen every episode of this season. But that's okay. And that's all I'm saying about the plot.

Murdoch Mysteries sells a lot on DVD and the distributor says, "The charming hit mystery series combines the period appeal of Sherlock Holmes with the forensic fascination of CSI." That doesn't do it justice, at all.

The show is so deftly done, it's a little masterpiece of tone and style. (Tonight's episode was written by Lori Spring and directed by Harvey Crossland. ) Sure, it's about Murdoch the isolated man-of-the-future stuck in a very antiquated place, but it is full of mischief and never becomes a stuffy period piece. Nor does it become pompous about science and forensics. Its lightness is its secret. It is often on the verge of comedy – Jonny Harris is just wicked as the babe-in-the-woods Crabtree and Thomas Craig is clearly having a whale of a time as Brackenreid. It's fabulous froth.

American Masters: The Godmother of Rock and Roll (PBS, 10 p.m.) is a celebration of the music and life of gospel singer and guitarist Sister Rosetta Tharpe. We're told about her huge influence on Chuck Berry and Elvis Presley, among others. As some pundit says, "It's not something we're used to, this image of the black woman behind the young white man." A delight for those who savour the music of the Rosettes, the Jordanaires and the Dixie Hummingbirds.

Murdoch Mysteries takes the stuffing out of period drama
December 30, 2012 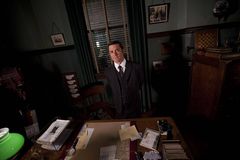 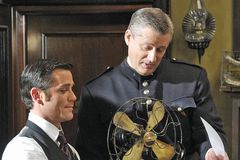 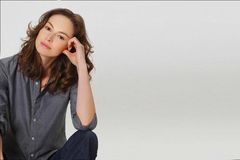